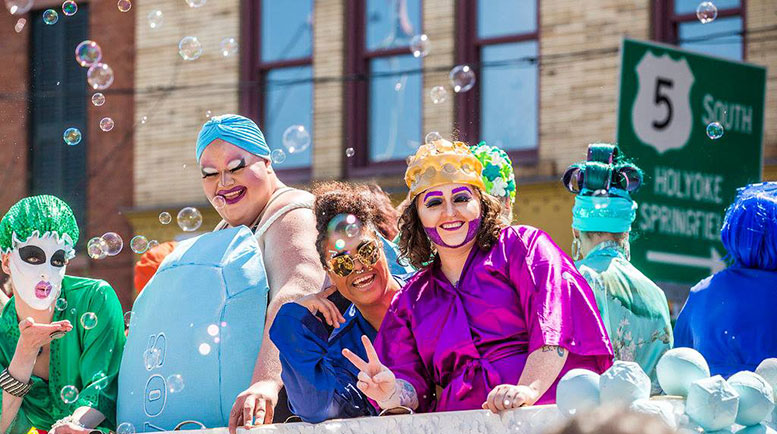 Northampton Pride kicked off Pride in New England earlier in May

“After having to make the incredibly tough decision of canceling this year’s Noho Pride Event, we knew that we wanted to come up with some way to still connect with the community and bring about the amazing feeling of love, acceptance, and celebration that the parade typically evokes,” said Anna Hoff, director of operations for Northampton Pride. “We envisioned establishing some form of virtual celebration, but we didn’t have much experience in the tech realm to facilitate logistics.

“Thankfully, Northampton Radio Group reached out to us with an offer to host a Virtual Pride Video Celebration. Having their partnership and support made this project feasible and the end result was the most beautiful video mosaic of acceptance, inclusion, and love in its purest form.”

NoHo Pride partnered with local radio WRSI to release a nearly 40-minute video on May 2 at noon with several vignettes all wishing the Northampton community a happy Pride.

Massachusetts U.S. Senator Elizabeth Warren, donning a rainbow boa, kicked off the video with a short segment wishing everyone a happy Pride.

“It is a time to remember the trailblazers who have fought for LGBTQ+ civil rights and honor those who are carrying that fight forward today,” she said.

Acknowledging how Pride would be different this year because of the pandemic, she reiterated that the community must come together for the sake of the continued struggle for equality.

“We face an uphill battle, but here is what I know for sure: The only way we are going to get through this battle is if we stand together, fight together, persist together, and always, always make time to dance.”

“Pride is about love, unity, strength, and perseverance, things we need right now more than ever,” said the representative, who also acknowledged LGBTQ+ trailblazers who fought for equality.

Mark Lattanzi, promotions director for WRSI, said that the station was thoroughly committed to seeing a virtual Pride celebration despite the limitations.

“We knew we couldn’t replace the in-person event and festival, but wanted to find a way to bring our community together, and the only way we could was online,” he said. “To me, Pride is a celebration—and a rallying cry. It’s a wonderful event that honors people’s true selves while reminding us that we must always guard against those who would take away rights. And it’s a wicked fun time, too!

“The annual Noho Pride parade and celebration is a huge event in Northampton. Our radio stations have been supporting the event for years with interviews and free commercials. We march in the parade and have a booth at the festival. We couldn’t bear the thought of a year passing without a celebration. When we approached Noho Pride with this crazy idea, they were all in—but had no idea how to technically execute the project. We could provide that. It was an excellent partnership. They did a ton of networking and outreach; we collected submissions and created the video.”

“I think coming together and celebrating is so important, in whatever fashion we are able to,” said Loo D’Flyest Priestly, a drag entertainer in Northampton who submitted a video to the virtual Pride celebration. “Not everyone lives in a home where they feel safe as a queer person yet alone feel celebrated and accepted. Pride is more than just rainbows and drag shows. It’s family, it’s love, it’s safety, and it’s making history. We need to provide these spaces for people as much as we can, especially now.

“I have been a performer at NOHO Pride for seven years and a co-entertainment coordinator for two years,” they said. “It is my favorite gig of the year. It is so close to my heart, there was no question in my mind about making a video for my community.”

Hoff of NoHo Pride said the community loved the video.

“The response from the community has been overwhelmingly positive—after having the video posted for a week, we’ve had over 15,000 views,” she said. “The way in which we go about engaging now is obviously quite different—the support and love is coming in waves of ‘likes’ and ‘comments’ on social media, but the love is definitely there and is incredibly refreshing.

“The absence of in-person events is a huge blow to the community, but furthering the notion of engagement with one another through virtual platforms is paramount.”