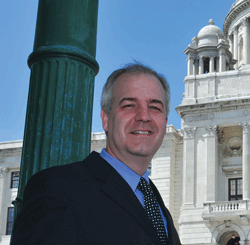 Last month, the Rhode Island House of Representatives approved a marriage equality bill with a vote of 51-19. This bill will now move forward to the Senate, although a date has yet to be set. This is the closest that RI has ever gotten toward same-sex marriage, having had the legislation brought to the attention of the General Assembly every year since 1997.

Over 100 people showed up to the House galleries for the Thursday afternoon vote, reported “The Providence Journal.” The final tally took place after over an hour of discussion on the House floor. Five representatives did not participate in this vote for varying reasons, from lack of attendance to illness: Spencer Dickinson, Deborah Fellela, Brian Kennedy, Peter Palumbo and Donna Walsh.

“I wasn’t particularly surprised, however, I was overwhelmingly happy to hear the news,” said Jonathan Rubins, a freshman at Brown University whose family owns a house in Westerly, RI. “I had heard about many of the LGBT supporters in the State House, so the real case was just hoping that no one would lose their footing and back down their support.”

The bill was initially introduced in the 2013 legislative session on Jan. 3 by democratic Rep. Arthur Handy. The legislation, H 5015, proposed the redefinition of marriage as the “legally recognized union of two (2) people.” From there, it proceeded to receive a unanimous vote from the House Judiciary Committee on Jan. 22, which is what sent it to win by 32 votes and move on to the Senate.
“[I] thought we’d get a few more than 48 [votes in favor] and was pleased that the spread was far better than 2-1,” said Chairwoman of the House Judiciary Committee, Edith Ajello to The Rainbow Times.

A democrat from Providence, RI, Ajello, remains hopeful in what she predicts will still be a battle in the Senate.
“Individual Senators will get a lot of attention from their constituents on this issue. I think that, as we’ve seen in House Judiciary Committee, the opposition will be ugly, hurtful and filled with too much talk of religion,” said Ajello. “I hope that attention will sway enough Senators to join the 11 signers of the bill in support. A simple majority on the committee and in the Senate as a whole is all that we need.”

If the Senate were to pass Rhode Island’s marriage equality bill, it would make New England the first entire region of the United States that supports same-sex marriages. Currently, the country allows marriage equality only in the District of Columbia and nine states: Connecticut, Iowa, Maine, Maryland, Massachusetts, New Hampshire, New York, Vermont and Washington.

“I was proud to witness such a historic moment for the state of RI and its LGBTQ community,” said Anthony F. DeRose, the Chairman of the RI Democratic LGBTQ Caucus. “Passages of this bill send a very loud message that the tide has turned here in RI. The momentum is there and now we must work together and focus on the Senate. All Rhode Islanders should be able to marry the person they love regardless of gender in the state that they work in, play in and call home.”

that this should be looked at as more than just an issue between two political parties. He cited RI Democratic Party Chairman Ed Pacheco as having the right attitude when he said, “This is not a democrat issue or a republican issue, this is a civil rights issue,” in front of the House Judiciary Committee in support of marriage equality.

For instance, despite being a democrat, Senate President M. Teresa Paiva-Weed is openly opposed to same-sex marriage. She had cited her top priorities this year as improving RI’s business climate as well as the economy. Even with her own personal differences, she has decided not to block a committee hearing in the Senate for the marriage equality bill.

“There will be a genuine debate and discussion in the Senate on this issue … I don’t anticipate changing my position on the bill that has passed the House,” said Paiva-Weed when she spoke with WJAR-TV’s 10 News Conference on Jan. 27. “I’m being very cautious in the words I say and the things that I do to ensure that this bill has a full and fair debate, because it’s important to both sides of this debate to ensure it stays civil, that tolerance is demonstrated by both sides and that it’s a meaningful discussion on the Senate.”

Others opposed include: Dominick Ruggerio, the Senate Majority Leader, and  Chairman Michael McCaffrey of the Senate Judiciary Committee.

Another option the Senate will debate includes the possibility of making same-sex marriage legislation a referendum, therefore allowing the general public to vote, rather than elected officials.

“We don’t believe that the rights of a minor class of citizens should be subjected to the popular vote of the majority,” said Ray Sullivan, campaign director for Marriage Equality RI. “This legislation has been closely watched and intensely debated for nearly two decades, we believe it’s time for the General Assembly to call the vote. We’re appreciative of the fact that the House is already done and it’s up to the Senate now. More broadly, the Governor and the Speaker and even the Senate President have all said that they don’t favor putting this issue on the ballot as a referendum.”

An openly gay resident of Coventry, RI, Kate Miechkowski, said, “Last year, Speaker Fox didn’t even put it up for a vote because he knew we wouldn’t get it. Instead, he put civil unions up for a vote. People were frustrated but, politically, I understand why he did it.”
The state’s first independent Governor since the late 1700’s, Lincoln Chafee is expected to sign the bill if passed by the Senate. A longtime supporter of marriage equality, he signed a bill in 2011 legalizing civil unions and in 2012 an executive order to recognize same-sex marriages that took place outside of RI.

“Although this vote is indeed historic, there is still a long way to go. Now that the House has swiftly acted, I urge Senate leadership to ‘call the roll’ – for our economy, for our gay and lesbian friends and neighbors, and for history,” said Chafee in a public statement on Jan. 24.