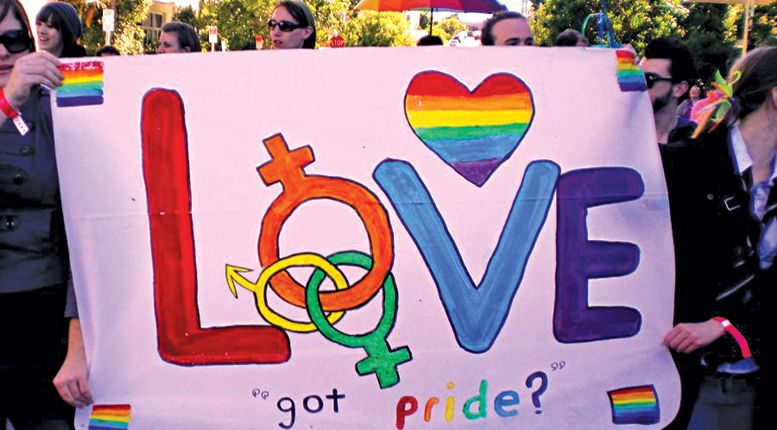 These are just a few of the most recent statements by Vice President—and religious bigot—Mike Pence about marriage equality. But it doesn’t stop there. In 2015, President Trump’s right-hand man signed a “religious freedom” law as Governor of Indiana that gave permission to businesses to discriminate against LGBTQ people. After only a couple months in office, Trump came close to passing a similar executive order, but was forced to back down after a series of humiliating defeats and pressure from LGBTQ organizations.

With Trump and Pence controlling the White House and a GOP majority in Congress, it’s understandable that millions of LGBTQ people, their family, friends, and allies are fearful that the rights won in recent years will be rolled back. While there’s no predicting what will happen in the next four years, with LGBTQ rights under threat in the Trump era, it’s important to look back at how marriage equality was won and generalize lessons for what’s ahead.

It’s impossible to overstate how profoundly social attitudes and legal rights for LGBTQ people in the United States have advanced in just the past 20 years. In order to understand where we’ve come from and how we’ve gotten here, a brief history lesson is in order.

In 1992, in response to pressure from the gay and lesbian movement and AIDS activists, Democratic President Bill Clinton ran on a platform of supporting gay rights. But on February 1994, only a year into office, the Administration turned its back on the LGBTQ community and caved in to the religious right, instituting the military’s Don’t Ask, Don’t Tell (DADT) policy, which prohibited gays and lesbians from coming out while serving in the military.

Then on September 21, 1996, in response to a ruling by the Hawaii Supreme Court opening the door to the legalization of marriage rights for same sex couples and growing pressure from survivors of the AIDS crisis fighting to secure benefits and inheritance rights for their partners, President Clinton signed the federal Defense of Marriage Act (DOMA), defining marriage for federal purposes as a union between a man and a woman. The bill also allowed states to refuse to recognize same-sex marriage granted in other states and was passed by the House and Senate with veto-proof majorities from both Democrats and Republicans.

The LGBTQ movement encountered divisive setbacks in the 1990s with the passage of DADT and DOMA under supposed Democratic “ally” Bill Clinton, but important social and cultural shifts were underway throughout the late 1990s and early 2000s that could not be reversed: more people, especially millennials, were coming out. As time went on, the future of discriminatory laws was tenuous as more Americans knew someone who was gay, lesbian, or bisexual.

On November 18, 2003, history was made when Massachusetts became the first state to legalize marriage equality. In the case of Goodridge v. Health Department the Massachusetts Supreme Court ruled that same-sex couples had the right to marry. In their ruling, the court stated in clear, unambiguous terms that separate was not equal, “The Massachusetts Constitution affirms the dignity and equality of all individuals. It forbids the creation of second-class citizens.” The ruling continued, “We declare that barring an individual from the protections, benefits, and obligations of civil marriage solely because that person would marry a person of the same sex violates the Massachusetts Constitution.”

Despite efforts to prevent and delay the ruling by anti-gay Republican Governor Mitt Romney and homophobic Democrat and Republican state legislators, the movement defeated the bigots. On May 17, 2004, the first marriage licenses were issued. As time went on, more people realized that far from leading to “societal collapse,” legalizing marriage equality simply guaranteed people’s basic civil rights.

The victory in Massachusetts inspired a wave of protests for marriage equality in towns and cities across the country. In San Francisco, thousands of couples lined up for marriage licenses when Mayor Gavin Newsom defied California’s discriminatory state law banning gay marriage and ordered the city-county clerk’s office to begin issuing marriage licenses to same sex couples until the Supreme Court stepped in and halted and overturned the licenses.

After Massachusetts, it appeared that there was an opportunity for a new civil rights movement to take off as others tried to initiate similar actions across the country. Instead, the Democratic Party worked to shut down the new movement. Marriage equality activists were accused of being too divisive and told to get behind John Kerry’s unsuccessful 2004 presidential campaign, despite the fact that Kerry _opposed_ marriage equality. The well-known openly-gay Massachusetts Congressman Barney Frank told couples in San Francisco that the “timing wasn’t right.” “When you’re in a real struggle, San Francisco making a symbolic point becomes a diversion,” he lectured.

Not only did Kerry lose to Bush in the 2004 election, but also 11 states passed constitutional amendments banning marriage equality, bringing the total number of states with anti-gay marriage laws to 38. Once again, the strategy of relying on the Democratic Party proved to be an enormous failure for the LGBT movement.

Four years later, the fight for marriage equality entered a new chapter. In June 2008, the California Supreme Court overturned its previous ruling and legalized marriage equality. Thousands of couples began receiving marriage licenses. But the victory was short-lived. A few months later, on election night, voters passed Proposition 8 (Prop 8), a ballot referendum funded by the religious right and the Mormon Church that overturned the court’s ruling and banned marriage rights for same-sex couples.

The response was immediate and overwhelming. Hundreds of thousands of people poured into the streets throughout California and across the country for the largest protests for marriage equality in history. Young LGBTQ activists new to politics and riding a wave of confidence after electing the country’s first Black president organized the protests largely through Facebook. It was the gap between increasing social acceptance of LGBTQ people on the one hand, and the persistence of legal discrimination on the other, along with the inability of established LGBTQ organizations to provide a vehicle for resistance and organizing, that generation Stonewall 2.0 was propelled into taking matters into their own hands.

In the face of mass protests, newly elected Democratic President Barack Obama came out against Prop 8, but maintained his opposition to marriage equality. Obama, the son of an interracial couple, hypocritically declared that marriage was a “states’ rights” issue, shamefully using the same rhetoric spouted by segregationists to oppose civil rights in the 1950s and 1960s.

Unsurprisingly, established LGBTQ organizations were ill-equipped to respond to the task at hand and were completely caught off guard by the outpouring of protests as new leaders took the reins. New activist groups emerged, like Join the Impact, and became the centers of grassroots organizing where new people could plug into the movement and participate in democratic debates and discussions about its direction.

Fed up with the slow pace of change and refusing to rely on the existing political establishments in Washington D.C., the tidal wave of protests culminated in a call by Cleve Jones, veteran LGBTQ activist and union organizer, and others for the National Equality March in Washington D.C on October 11, 2009. Organized entirely by working-class grassroots activists and on a shoestring budget, the march drew more than 250,000 people and was the first national demonstration for LGBTQ rights in more than 15 years. Organizers intentionally broke from Gay Inc.’s myopic politics and emphasized the importance of solidarity and incorporating a wide spectrum of LGBTQ issues, specifically transgender rights, into the march’s platform.

The march had one simple demand: fully LGBTQ equality now! Speakers included a diverse group of activists, including the parents of Matthew Shepard, same-sex couples, undocumented immigrants, union advocates, queer and trans activists of color, youth organizers, open socialists, Broadway performers, poets, artists, and yes, even popstar Lady Gaga. Activists demanded the repeal not just of Prop 8, but DADT and DOMA as well, and called for federal protections in employment and housing and full equality for trans people.

Only at the last minute when it became clear that the march was gaining momentum did mainstream LGBTQ organizations like the Human Rights Campaign (HRC) and the National LGBTQ Task Force endorse the march, after initially strongly opposing it. Barney Frank showed his disdain for grassroots activism yet again when he lectured that the March was, a “waste of time at best” that does little to cause real change. “The only thing they’re going to be putting pressure on is the grass,” he lectured. History proved him wrong.

The level of protests, as well as grassroots organizations, ebbed in the following years. The movement became dominated by a legalistic strategy that emphasized court battles over protests and bottom-up organizing. But the explosion of protests nationwide after Prop 8 and the National Equality March marked a turning point in the battle for marriage equality and LGBT rights.
Over the next six years, the victories rolled in as laws codifying discrimination and second-class citizenship were torn down.

On September 20, 2011 Congress repealed DADT. On June 26, 2013 in the landmark United States v. Windsor case, the U.S. Supreme Court ruled DOMA was unconstitutional. Between 2008 and 2012, seven states legalized marriage equality; in 2013, eight more added their names to the list. In 2014, 19 states joined the ranks, bringing the total number to 37 by 2015. In October 2012, responding to the accumulated pressure of LGBTQ activists, President Obama became the first sitting president to come out in support of marriage equality. Then, on June 26 2015, history was made when the Supreme Court ruled in Obergefell v. Hodges that the fundamental right to marry is guaranteed to same-sex couples under the 14th amendment. Marriage equality became the law of the land in all 50 states.

In a matter of 10 years, marriage equality went from being the right wing’s wedge issue in the culture wards, to an ascending movement that flipped public opinion, secured legal victories, and forced Republican and Democratic politicians alike to change their tune.

So how’d this happen?

The wave of demonstrations after Prop 8 and the National Equality March were central to breaking the debate over marriage equality out of the confines of a narrow state-by-state issue and onto the national level. They gave confidence and momentum to future legal fights by changing public opinion and pushing support for marriage equality into the majority by 2010. This groundswell in activism, along with the fact that more people were coming out and getting married, lead to a sea change in public opinion that created pressure on politicians and judges and fundamentally altered the landscape of legal campaigns.

While battles inside the courts were important to winning marriage equality, it was the pressure from below created by millions of ordinary people who participated in the movement that drove the struggle forward to victory.

That’s the lesson to take with us in the fights ahead as we tell Trump and his legion of bigots and reactionaries that we refuse to go back into the closet.