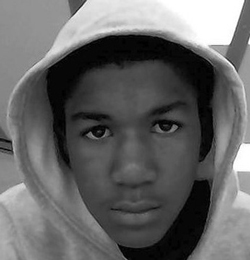 This year, LGBTQ activists celebrate the life and legacy of Bayard Rustin. Rustin’s accomplishments were so great that the 100th anniversary of his birth should be heralded on the front pages of the country’s most influential newspapers. However this Civil Rights powerhouse was erased from history because he was gay, and being such, was seen as a threat to the credibility of the movement. The Civil Rights movement’s refusal to acknowledge Rustin as a leader and his subsequent exclusion from our history books speak to a debilitating pattern in our society of devaluing the worth of individuals solely based on their identity.

Sexual orientation in one, race in the other

In Rustin’s case, the motivating factor was sexual orientation; in another now infamous example, that of Trayvon Martin’s, it was race. Martin was fatally marked as unacceptable in a public space by George Zimmerman, a man who was threatened by Martin’s Black, teenage male body. Without looking at the physical images of the two males involved, Zimmerman’s criminal record would lead most people to believe that he, as opposed to Martin, presented a bigger threat to public safety.  However, due to the socially constructed fear of the Black male created by a white dominated society, Martin’s simple presence was enough to condemn him to death.

Though the attention currently given to Martin’s murder is extremely necessary and worthwhile, we must not be fulfilled by seeking justice in this one case alone. The need for social and political activism didn’t begin with Martin and shouldn’t end if Zimmerman is prosecuted. Instead, it should fuel the fire for dismantling all forms of systemic oppression that violate innocent bodies daily. As Rustin once taught, we will never experience true freedom as a country until everyone is able to live their lives free of violence generated by ignorance and hate.

“Stand Your Ground” in other 21 states, pending in Massachusetts

The law that may protect Zimmerman from prosecution is not unique to Florida. Twenty one other states across the country have similar so-called “Stand Your Ground” laws on the books, and there is one even pending right here in the Commonwealth of Massachusetts. This bill would allow Massachusetts residents to use guns, knives, or deadly force to defend themselves in public. As we’ve seen in Florida, where “justifiable” homicides have doubled in the past five years under their law, if passed, this law could grant individuals like Zimmerman a legal way to police public space based on their subjective perceptions of safety.

Impact on communities of color

It would also disproportionately impact communities of color, immigrant communities and LGBTQ people, groups who already experience some of the highest rates of hate crimes and violence. In fact, according to a 2010 report from the National Coalition of Anti-Violence Programs, 70 percent of violence perpetuated against the LGBTQ community happens to people of color; half of those crimes target transgender people of color. Those who rally on behalf of Martin should also work to strengthen coalitions with other marginalized groups and apply greater pressure to elected officials to vote against this bill and protect all communities from aggressors motivated by misguided suspicion and hate.

Inevitably, #Justice4Trayvon will stop trending on Twitter, and we will all retire our hoodies to the back of our closets. But let’s do our collective work to ensure that America does not consciously erase the story of Trayvon Martin from our history like it has with Bayard Rustin.  It isn’t until we challenge our own suspicions of others, and then consistently advocate together, that we will build a true movement towards social justice void of suspicion, fear, and intimidation.

*Kara S. Suffredini is the Executive Director of MassEquality.

*Corey Yarbrough is the Executive Director of the Hispanic Black Gay Coalition (HBGC).