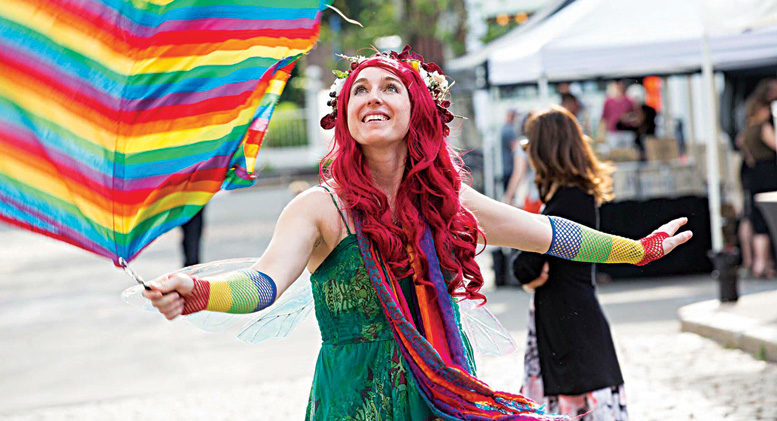 I didn’t know I was an artist, but I knew I wasn’t straight.

When I was eleven and living in Sarasota, Fla., doing far too well on standardized tests, my conservative Christian parents made the interesting choice to advance me a couple of years and put me in a large public High School. When I became a Junior at thirteen, I met Erin. She had golden starbursts in her eyes and freckles on her nose and when she held my hand I couldn’t breathe, but it still made me feel safe.

My parents pulled me out of school before the holidays that year. My Dad had stumbled upon an e-mail that I had sent to one of my classmates where I used the word “jacka$$” and he didn’t like it. He also didn’t like the crowd that I was hanging out with. They were goth kids, punk kids, queer kids. They were the fringe society kids, the basket-cases, the miscellaneous.

And that’s what I was too, one of the miscellaneous.

I spent my teenage years trying to ignore my various attractions to people of opposite spectrum genders because not only was I forbidden to date women, I was even forbidden to date in general. And, because I was so far ahead in school, when I wasn’t on a tennis court training for ITF tournaments or reading whatever books were available to me—mostly classics and books written by evangelists like Jesse Duplantis or Kenneth Copland—I would write.

I would put pen to paper and try to make sense of why I felt trapped and alone. When no authority figure in my life would listen to me, the paper would and the words would sing lullabies to me as I wrote them. The words weren’t brilliant words, they were faltering and scared but I wrote down what I felt.

This ritual felt sacred, like a promise to myself that no matter what happened, I would get through it and find another place and group of people who would understand what I went through, what I wanted, and how to live a life that wasn’t societally normal.

I didn’t believe it fully at the time, but I hoped for it.

Halfway through grad school at Boston College, someone suggested to me that I might try freelance writing as a way to pay my bills. More than a decade of playing competitive tennis had wrecked my body and I was struggling to keep up with working full-time at a bakery and taking full credit hours at school. In my whole life, I had never thought that I could possibly get paid for what I had been writing, and when he suggested this, my whole world changed.

It was also that year that I would meet my eventual husband, which is something I’ll return to in a moment.

The first couple of years of writing professionally sapped the strength from me. I had been using this skill, this art, as an outlet and suddenly, I was dependant upon it for my financial security. It burned me out quickly and I had to start looking for other ways to fill that emotional gap that words had filled up until that point. I picked up a camera and started photographing people. It was exactly what I needed.

My first fully-fledged art project was called the Olympians. The idea was to transform humans into deities by putting them in elaborate costumes and covering them in glitter. I wanted it to be a statement on elevating queer culture. My Aphrodite was male. My Hermes was non-binary. All of the models I chose were miscellaneous.

I moved to Salem, Mass. in 2013. I was bedazzled by all the queerdos that not only lived there, but who wanted to be friends with me. My inner eleven-year-old squealed with delight each time I would have a long conversation about gender or pansexual identity or making weird art. No one looked at me askance when I told them about the fantastical worlds I wanted to create—they offered to help me. No one questioned me when I told them that I thought that I might be non-binary. They offered me support, they offered me resources, they told me their stories.

Almost immediately after getting married in 2017 I realized that I wasn’t the gender I had been assigned at birth. I was somewhere in the middle. I was Peter Pandrogynous. Marriage has a way of holding up a magnifying glass to self-identity and existing issues and so, along with the gender identity, questions concerning my orientation and my difficulties with monogamy immediately came to the forefront of my daily life.

I tried to ignore all of these questions for a year until suddenly my heart couldn’t take it anymore. I had met someone, a pixie person with hair like sunlight and impish eyes full of secrets. My husband and I started going to couples therapy. I told the therapist that I wasn’t straight, wasn’t ever going to be, but that I also identified as polyamorous, so if my husband was willing to make it work, then I could also make it work.

There are so many other complicating factors why we ultimately couldn’t make it work—many of which related to mental health and communication incompatibility—but we couldn’t, and that is something I am still processing even now.

I officially came out to the community as non-binary earlier this year and my orientation and poly identification came soon after that. When I joined Creative North Shore in December as the Managing Editor, they not only accepted me for who I was but encouraged me to tell the truth about my experiences. I felt like I didn’t have to hide anymore.

There is a part of me that is still terrified to be open about the things which I had kept locked away for most of my life, but there is a larger part of me that knows that bravery is the only thing that will make this life possible. That bravery enables me to love who I love, create what I love to create, and tell the truth about all of it, whether it’s good or bad or a whole host of other feelings in between.

My art is wrapped up into who I am as a person. All of my experiences and perspectives drive the creative process and I don’t know who I am apart from those things.

I am proud to be an artist, to be miscellaneous, to be queer.

*Joey Phoenix is a queer writer, photographer, character performer, and the co-founder of Moonrise Fae. When not wearing wings entertaining children, putting guinea pigs in alluring costumes, or Morris Dancing, they can be found manically scribbling and using too many em-dashes as the Managing Editor for Creative North Shore. They currently live in Somerville, Mass. with their guinea pig Dangerous Beans and their goblin housemate’s two demon cats, Lilith and Lucifer.