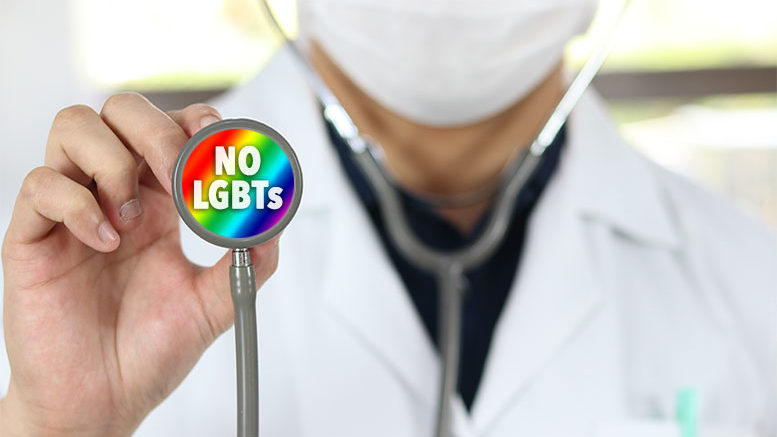 WASHINGTON–Today the U.S. Department of Health and Human Services announced a new federal rule that allows health care and medical providers to determine patient care based on their religious or moral beliefs, potentially opening the door for discrimination.

Masen Davis, CEO of Freedom for All Americans, released the following statement:

“All medical patients should have the basic ability to seek care and treatment without the fear of being turned away or facing discrimination because of who they are. This new HHS rule means LGBTQ people and others could be denied lifesaving emergency care or crucial information and counseling about their best health care options. A patient’s health should always come first, and all Americans should be treated fairly when attempting to care for themselves and their loved ones.”

This would mean that “health care providers can refuse to provide medical care, including contraception, abortion, and procedures for transgender patients,” that go against their religious beliefs, according to Mother Jones.

Gretchen Borchelt of the National Women’s Law Center told Politico that this will affect everyone, changing the expansion of the already established conscience protection

“It would mean a woman seeking birth control at a pharmacy could be turned away,” Borchelt said. “A woman facing an unintended pregnancy could be denied information about her options.”

The new rule could have a wide range of negative impacts on LGBTQ Americans. Some examples include:

The regulation allows virtually any individual or entity involved in a patient’s care – from a hospital’s board of directors to the receptionist that schedules procedures – to put personal beliefs ahead of a patient’s health. The rule is especially dangerous for those already facing barriers to care, particularly LGBTQ people living in rural areas with few healthcare options and in states without existing health nondiscrimination protections. The rule was first proposed at the start of 2018; and in March 2019, a broad coalition of organizations submitted 200,000 public comments in opposition to it.

Reactions from other organizations:

Statement from Kristin Rowe-Finkbeiner, executive director and CEO of MomsRising, a national online and on-the-ground organization of more than 1 million mothers and their families, on the Trump administration’s rollback of the health care rights law:

“The harmful, discriminatory rule the U.S. Department of Health and Human Services issued today is dangerous, unethical and repugnant to America’s moms, who want health care providers to put patients first and ensure that all people get the health care they need. Today’s rule allows federally-funded health care providers (hospitals, doctors, nurses, and other individuals and institutions) to deny care to patients based on a provider’s personal or religious beliefs — and not make decisions based on what is best for the patient. This will result in taxpayer-funded discrimination toward people who already experience barriers to care, particularly LGBTQ+ people, patients of color, and women. It has no place in our country.

“Health care providers’ religious beliefs should never be allowed to trump the needs of their patients. No hospital or health care providing institution that receives government funding should be allowed to pick and choose who it provides or denies care to based on personal or religious beliefs. This rule provides a license to discriminate in federally funded institutions. It will result in denial of care to some of the most vulnerable patients in the nation and it is abhorrent to our values.

“When it comes to health care, the patient should always come first. The moms of America vehemently oppose discrimination in health care and we will fight this new rule. This is another part of the administration’s attack on our families’ access to health care. It is truly a disgrace.”

MomsRising.org is an on-the-ground and online grassroots organization of more than a million people who are working to increase family economic security, decrease discrimination against women and moms, and to build a nation where businesses and families can thrive. Established in 2006, MomsRising and its members are organizing and speaking out to improve public policy and to change the national dialogue on issues that are critically important to America’s families, including criminal justice reform, immigration policy reform, and gun safety. MomsRising is working for paid family and medical leave, affordable, high-quality childcare and early learning, and for an end to the wage and hiring discrimination which penalizes women — particularly moms and women of color — and so many others. MomsRising advocates for access to healthy food for all kids, health care for all, earned sick days, and breastfeeding rights so that all children can have a healthy start. MomsRising maintains a Spanish language website: MamásConPoder.org. Sign up online at www.MomsRising.org — and follow us on our blog, and on Twitter and Facebook.