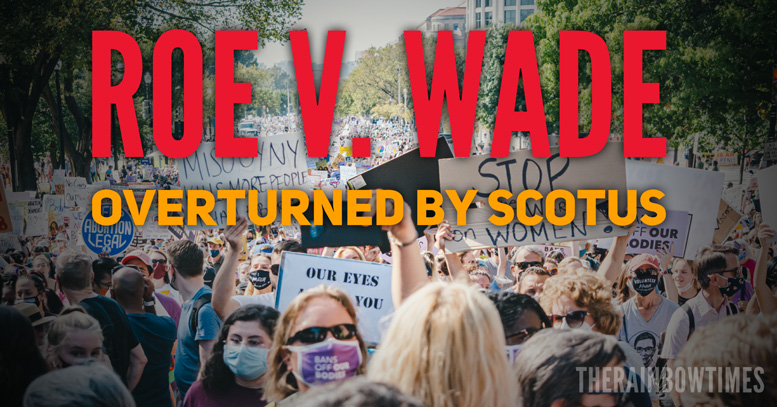 Overturning Roe v. Wade; Most Justices for the majority opinion, without first-hand personal knowledge, change law radically; hurting Americans of color most, immigrants, others; You could be next

The Conservative-led Supreme Court, in a 6-3 decision disregarded and ignored 50 years of legal precedent, effectively overturning Roe v. Wade — the constitutional right to abortion in the U.S. since 1973. The deeply divided Court voted similarly, as expected, according to the leaked-drafted opinion made public approximately a month ago.

“The constitution makes no reference to abortion, and no such right is implicitly protected by any constitutional provision,” read the majority opinion written by Justice Samuel Alito for the Court, showing no regard for people of childbearing age.

Alito’s lengthy and archaic opinion ultimately translates to the likes of a unilateral adjudication that states appear to be completely free to ban abortions for any reason.

The 6 to 3 majority opinion, with Chief Justice John Roberts writing a separate concurring opinion only pertaining to the judgment, was supported by Justices Clarence Thomas, Neil Gorsuch, Brett Kavanaugh, and Amy Coney Barrett.

Fear from many LGBTQIA+ people has existed ever since the fight for Roe was there. Now, with the overturning of Roe, those fears have become realized, especially after one of the Justices, vocal for his anti-LGBTQIA+ stances, has written about it exactly from the pages within the Roe decision itself.

The reasoning that the Supreme Court has used to overturn Roe, may also be used to overturn cases establishing rights to contraception, same-sex relations, and same-sex marriage rulings later on, according to Justice Thomas. He argued, in a concurring opinion he wrote today that the court “should reconsider” all three decisions — Griswold v. Connecticut, Lawrence v. Texas, and Obergefell v. Hodges — saying the Court had an obligation to “correct the error” established in those precedents.

Griswold v. Connecticut is a 1965 decision that set forth the right of married couples to contraception use. In 2003, Lawrence v. Texas put an end to sodomy laws (laws criminalizing consensual, sexual conduct between individuals of the same sex) that remained on the books in 13 states at the time and made same-sex sexual activity legal across the country. Lastly, Obergefell v. Hodges made same-sex marriage the law of the land in 2015.

For many same-sex couples, these laws may potentially invalidate their marriages or could, all together, halt their right to marry and to be eligible to receive spousal benefits formerly afforded only to heterosexual people. It could also invalidate one same-sex parent’s right to see, care or make decisions for their children. Since the Supreme Court’s leaked memo, many same-sex (LGBTQ+) parents have started to work on ways to protect themselves from something that this Court may disagree with personally, as Justice Thomas has made clear, despite how he has a double standard when it comes to rules for others vs. rules for himself and his wife, Ginni Thomas.

“With sorrow—for this Court, but more, for the many millions of American women who have today lost a fundamental constitutional protection—we dissent,” the three Justices wrote.

Via a press conference, Speaker of the House Nancy Pelosi addressed the country after the historic vote, stripping people of their constitutional right to obtain a safe and legal abortion.

“In Congress, be aware that the Republicans are planning a nationwide abortion ban … that is their goal,” said the Speaker. “The hypocrisy is raging, but the harm is endless. What this means to women is such an insult. It’s a slap in the face to women about making their own decisions. … There is opposition to any family planning … this is deadly serious.

“We’re not going to let this pass. Reproductive rights is on the ballot in November.”

About 66 percent of Americans favor Roe v. Wade to stay in place, according to CNN, yet the Conservative Justices voted differently. Countless protests are taking place throughout the country. Protests in front of the Supreme Court building abound.

“Six radical Supreme Court Justices have overturned nearly 50 years of precedent, stripping away the constitutional right to an abortion. After decades of scheming, Republican politicians have finally forced their unpopular agenda on the rest of America. They have decided that the government — not the person who is pregnant should make a private health care decision and deny women the right to control their own bodies and futures. But these extremists will not have the final word.

“Democrats have tools to fight back, from legislation in Congress to executive orders from the President to initiatives at the state and local level — we just need to use them. We are angry — angry and determined. We will not go back. Not now. Not ever.”

Mass. Attorney General and gubernatorial candidate, Maura Healey, issued today the following statement in response to the U.S. Supreme Court’s decision in Dobbs v. Jackson Women’s Health Organization. Today’s decision overturned the landmark case Roe v. Wade, which recognized nearly 50 years ago that the Constitution does not permit states to prohibit a woman from deciding whether to carry her pregnancy to term. The decision also overturned Planned Parenthood v. Casey, which reaffirmed Roe almost 30 years ago.

“We knew this was coming, but that doesn’t make it any less painful, less enraging, or less terrifying for the tens of millions of people who stand to lose access to basic, life-saving care,” said the Mass. AG. “Today, for the first time ever, the Court has taken away a constitutional right — a right that has been recognized for nearly half a century.

“But in Massachusetts and other states where abortion will remain legal and accessible, we’ll do everything we can to ensure patients from across the country can receive needed care and to support and protect our providers who are offering that care. The majority of Americans want to keep abortion safe and legal, and I’m calling on Congress to do just that by codifying Roe.”

Forty million women of childbearing age live in states that are hostile to abortion, according to the Guttmacher Institute, 2021.

Alexandria Ocasio-Cortez, D-NY, an outspoken Rep. for abortion rights, expressed her discontent and awe to CNN.

“They chose to endanger the lives of all women and all birthing people in this country. But, not only that, they stripped rights from men too,” said the New York Congresswoman. “Frankly, the right to our own bodies and the right to form our own families, this is the right that belongs to all of us.

The court “not only reversed nearly 50 years of precedent, it relegated the most intensely personal decision someone can make to the whims of politicians and ideologues—attacking the essential freedoms of millions of Americans.”

The Supreme Court’s decision can be read here. Reactions from social media are below.

The SCOTUS just ruled a gun has more rights than a woman. They just endangered all your kids and all women at the same time. In places like Texas you can go to jail for murder for a miscarriage. The GOP did this.#RoeVWade #scotusIsCompromised https://t.co/wdFu8pBhYN

No unelected body should have the power to strip people of their human right to autonomy, especially an institution as plagued by controversy, illegitimacy, and naked partisanship as the United States Supreme Court. @sandylocks on #DobbsVJWHO #RoeVWade #LiberateAbortion pic.twitter.com/Gvt57YPjni

The hypocrisy of a group that decimates abortion rights in the name of life, yet expands gun rights which cause nothing but death. #Dobbs #roevwade

There it is. This extremist Supreme Court has overturned #RoevWade and changed the America we know.

This will hurt so many people. And anyone who knows our country's legacy of racism & discrimination knows this will disproportionately harm Black people and other people of color.

We won’t let this dampen the commitment we have to each other. We will continue finding ways to support each other in finding the abortion care that we need, as we’ve always done. #DobbsvJackson #RoevWade #ReproJustice pic.twitter.com/DMCkTdOBPK

Overturning Roe and outlawing abortions will never make them go away.

It only makes them more dangerous, especially for the poor + marginalized.

People will die because of this decision. And we will never stop until abortion rights are restored in the United States of America.

They did it. THEY DID IT TO US! #SCOTUS has overturned #RoevWade, enshrined in the Constitution as settled law for over 50 years. How dare they? This #SCOTUS is absolutely tone-deaf to the will and even the actual needs of the American people. #WakeUpAmerica

My statement on the Supreme Court overturning #RoeVWade: pic.twitter.com/a3iEBTuctv