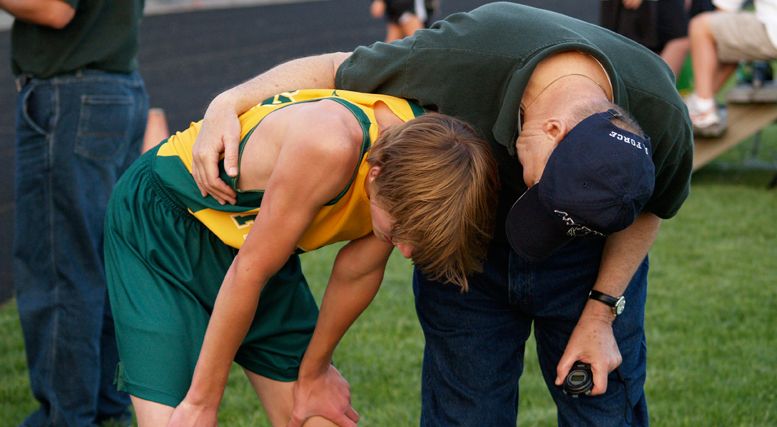 By: Dan Woog*/Special for TRT—

In nearly 10 years of covering sports, “The OutField” has reported on dozens of LGBT athletes and coaches. We’ve interviewed gay fan groups and referees. We’ve talked about the Gay Games, and the (largely) straight Olympics.

But we’ve never done a story on athletic trainers.

In the wide world of sports, trainers play a key role. They work intimately with athletes, diagnosing injuries and shepherding young men and women through physical therapy to get them back on the field. Trainers’ jobs are hands-on – literally – while their training room is often a safe haven, where athletes can talk freely about their greatest worries and deepest fears.

So, like other therapists – psychologists and psychiatrists – many athletic trainers do not talk about themselves. Particularly if that talk would involve same-sex partners.

In some ways, Redding is a typical trainer. He grew up two hours south of Houston, in Victoria, Texas, where football was king. He played “one day” in junior high, but found his calling because the high school athletic trainer was a great role model. Redding followed suit, and earned a scholarship to Texas A&M University.

He spent four years after graduation working at a high school, four more at a junior college, then another four at California Baptist University. He’s been at Henderson State – a “much better fit” – for the past nine years.

Redding loves his work. He’d thought about practicing medicine, but realized doctors see patients for just 15 or 20 minutes, in an office setting. “There are no relationships,” he notes. “But athletes really talk to trainers. They’re in a safe space. It’s personal, and very fulfilling.”

Redding first thought he might be gay in high school. He was sure in college. He never had overt experiences with homophobia – but, he says, “It was a typical Southern atmosphere. I heard the jokes and the negative things. They get imprinted on you.”

At California Baptist, he made a conscious decision to stay in the closet. It was not a happy time. When he moved to Henderson, he knew he could no longer hide – or lie. “If anyone asked, I promised myself I’d tell,” he says.

Redding started by calling out athletes for making anti-gay comments in the training room. Soon, he says, “people probably knew” he was gay.

Redding was assigned to the football and baseball teams. He had a great relationship with head football coach Scott Maxfield—with whom he had worked at a previous school — on and off the field. About five years ago, on one of their daily walks around the track, Redding came out to him.

Maxfield had one question: “Why didn’t you tell me sooner?”

Once Redding had the head coach’s backing – and Maxfield’s wife, who he told the same night – the rest of the process was easy. It culminated in a story he wrote for Outsports last month. He wrote: “I am at every practice and travel to every game with my teams. I am responsible for evaluating and treating injuries to my student-athletes. A lot of time this requires close physical interaction with them. While I am very professional with all my interactions, I have long worried about how the athlete would feel if the guy doing a deep-tissue massage on his hamstring was gay.”

Those fears were unfounded. Redding realized that being honest allowed him to do his job even better.

Henderson State University is a safe place – “administratively, and with students and coaches,” Redding says. “There are a bunch of good people here.”

He’s been uplifted not only by Henderson’s athletes – who really don’t care about their trainer’s sexuality, so long as he gets them back on the field quickly – but by the responses of strangers to his Outsports story. A closeted trainer in Texas thanked him for providing hope. A Pac-12 trainer who is out to a small group of people called Redding an inspiration for showing what it’s like to be fully out.

Redding does not have many professional role models. But at an Outsports “reunion meeting” in Chicago this summer, he heard stories from gay student-athletes, coaches, administrators, journalists – and even a few athletic trainers. That helped him understand the power of openness and honesty.

This year, Redding will speak about diversity at an NCAA Division II administrators’ meeting. He’ll tell his story, and hopes it will inspire others.

Athletic trainers shun the limelight. “We’re support staff,” Redding notes. “We’re just here to help. But if I can help reach folks who are in the closet, I’m happy to do that.”