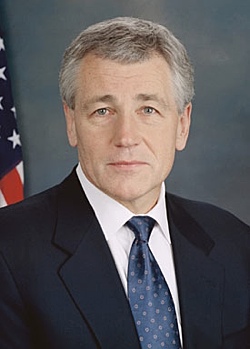 “Senator Hagel clearly has the military credentials and experience to do the job of running our nation’s Defense Department – at OutServe-SLDN, we have no doubt about that – and we appreciate his apology for the anti-gay remarks he made in 1998 and the commitment he expressed to LGBT service members and their families. It will now be incumbent upon him during the nomination and confirmation process to lay out demonstrable actions he will take to support that commitment.

Senator Hagel has said he is ‘committed to LGBT military families,’ so if nominated and confirmed, he should immediately extend, via secretarial directive, all benefits available to married same-sex military couples and families while the so-called Defense of Marriage Act (DOMA) is still on the books. He said he is ‘fully supportive of open service,’ so he should extend military equal opportunity and nondiscrimination policies so that all qualified Americans who wish to serve this nation in uniform may do so without fear of harassment or discrimination. Steps such as these would do a great deal to allay the concerns many in our community have expressed over the last several weeks. I look forward in the weeks ahead to discussing these and other issues important to LGBT service members and their families with Senator Hagel and his designees.”

ABOUT OUTSERVE-SLDN: OutServe-SLDN is the association of actively serving LGBT military personnel with more than fifty chapters and 6000 members around the world It works to support a professional network of LGBT military personnel and create an environment of respect in the military with regard to sexual orientation and gender identity. It is a non-partisan, non-profit, legal services and policy organization dedicated to bringing about full LGBT equality to America’s military and ending all forms of discrimination and harassment of military personnel on the basis of sexual orientation and gender identity. OS-SLDN provides free and direct legal assistance to service members and veterans affected by the repealed “Don’t Ask, Don’t Tell” law and the prior regulatory ban on open service, as well as those currently serving who may experience harassment or discrimination. For more information, visit www.outserve-sldn.org.