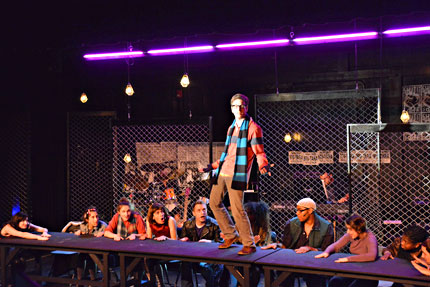 The Cape Cod fundraiser, held in December 2014, raised over $100K. The new fundraiser, the first annual Boston gala, will be held April 17, 2015 at the Marriott Copley Place.

Erica Kay-Webster, founder, CEO and president of The Foundation for International Justice and executive director of Promise Place School, said the school is still set to open in September this year. Chris Morgan-Janes, director of education for the school, currently heads the educational and residential team, who is in the process of finalizing the school’s curriculum, job descriptions, policies, procedures, and housing components. The teaching staff will be hired in June and according to Kay-Webster, many volunteers have stepped up and are in place to assist with the school when it opens.

“The truly unfortunate story here is that this situation has been around for decades,” said Kay-Webster. “Up until recently it was not a conversation that anyone wanted to have. The shortage of funding, caused mainly by invisibility, has made it virtually impossible to create programs like Promise Place School. For example, on Cape Cod our homeless youth under the age of 18 have no beds available to them. Currently in the Commonwealth, there are fewer than 25 beds for our youth. This is common throughout the United States. Just in the last several years, legislative action has gained traction, and with the recent passage of the Homeless Youth Act in Massachusetts, some limited funding has now become available in the Commonwealth to begin addressing this issue.”

“We are building a fully sustainable model which can, and we hope, will be replicated throughout the United States,” she said.

THE BOSTON GALA will accommodate up to 1,000 attendees, a larger gathering than the one held on the Cape. It

will feature an awards ceremony, a live and silent auction, and entertainment by the Peregrine Theatre Ensemble of Provincetown, Mass., headlined by Adam Berry, actor, singer, and paranormal investigator as seen in the SyFy series “Ghost Hunters.”

“It is extremely important to support our youth, especially during the time of adolescence and young adult years,” said Adam Berry, executive producer, Peregrine Theatre Ensemble. “Kids who ‘dare to be different’ need a support system around that nurtures and educates in a comfortable nonjudgmental environment. When there is nowhere else to turn, Promise Place School will be there to help them, leaving less opportunity for kids to get desperate or follow a dangerous path. Suicide is up, bullying is rampant—always has been—and there needs to be a light at the end of a dark tunnel.”

Berry expressed why this cause is particularly important to the Peregrine Theatre Ensemble.

“[We] support diversity of all kinds,” Berry said. “We are a theatre company where most of us growing up felt that while in the theater or performing we could be what we wanted to be. We could be whoever we naturally were and be surrounded with others who felt the exact same way. It was our support system. We know from experience how basic the need of encouragement and understanding really is. This school can be that to many who might not have had any other chance.”

Berry shared that the Ensemble’s performance at the Gala will showcase their work from their sold out run of the musical “RENT,” new material that fits with the theme of the evening, and a sneak peek at their 2015 summer production of “CARRIE the musical.”

“We are truly grateful to Cyndi Lauper for her determined efforts though her True Colors Fund and her most recent partnership with HUD [U.S. Department of Housing and Urban Development] and the LGBTQ Youth Homelessness Prevention Initiative,” said Kay-Webster. “We also applaud HUD Secretary Julian Castro for his strong support for this partnership, which has also been encouraged and supported by President Obama.”

Eastern Bank, who also sponsored the Cape event, has signed on as the Boston event’s first Platinum sponsor. Additional sponsors will be announced soon.

“Throughout the fight for marriage equality we have spent millions of dollars to gain this crucial right to freedom for our adult community, but what are we doing to support the right to a basic human life and the rights for our LGBT youth in this nation?” said Kay-Webster. “Leaving our youth in this disgraceful situation is something we must rectify. Personally, for me, this is a life mission I will not turn my back on or walk away from. Our youth are our future and it is our obligation to take immediate action.”

Grace Sterling Stowell, executive director of the Boston Alliance of LGBTQ Youth (BAGLY, Inc.) also shared why the work of Promise Place School is so important.

“Due to lack of family support, societal stigmatization, discrimination and violence, LGBTQI youth are disproportionately represented among the homeless youth population in Massachusetts and throughout the nation,” said Sterling Stowell. “It is critically important that these young people are able to obtain housing, education and other resources that are culturally competent in addressing their needs. The Promise Place School’s mission on behalf of these young people is an important and much needed new resource for our entire community, and so we are excited to support their efforts as they move forward.”

Tickets for the event go on sale March 15. For more information, tickets, sponsorship inquiries and opportunities, visit www.promiseplaceschool.org or call (774) 330-3106.