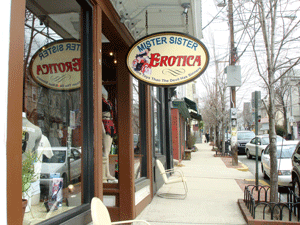 When politicians talk about the importance of small-business owners, rarely, if ever, does it evoke the thought of adult-shop owners.

The differences between an adult megastore and a locally-owned boutique are the same as one might find between an honest to goodness general store and a well-known department store. The concept of customer service changes drastically between the two, as does the ambiance. And these things make a world of difference when shopping for an adult item, as opposed to, let’s say, ibuprofen. Recently, Providence’s own adult boutique, Mister Sister, was nominated for the best boutique award by AVN (Adult Video News) precisely because of these factors. The AVN ceremony is the largest annual award show in the adult industry, making the nomination a high honor.

Within minutes of walking into the store, it became clear why Mister Sister would attract such attention. Beyond the wonderfully kitschy pin-up on the sign, coupled with the slogan “we’ve got more [items] than the devil’s got sinners” lay a spacious boutique, well-stocked, but not overwhelming. With a staff of three, the store is open seven days a week on Providence’s east side.

Robert, who was working behind the counter was eager to show TRT a century’s worth of sex history, showing off a variety of items, some shaped like a blow-dryers, and others adorned with ruby-eyed cobra from the 1990s. While poking around and interacting with other customers, it became more obvious what a personal and vulnerable experience adult-item shopping can be.

Speaking with Devioune Mayim-Daviau, the store’s owner, about the clientele highlighted the differences between her old location in Provincetown and the new location.

“Providence is old New England,” she said, “and sexuality is really tight. The type of client that we have, my demographic is a little bit of everybody. Every sexuality, every gender, from 18 to 80, and the store was purposely put together to satisfy everyone.”

This indeed rang true when grazing around the shop for a bit, even on a slow Sunday afternoon. Conversations ranged from modern queer identity to how to please one’s partner in a monogamous heterosexual relationship, punctuated by flocks of young women and others trickling in through the doors.

When asked about the nomination, Devioune was “so excited it’s ridiculous.” Mister Sister was the only store in New England nominated for the award this year, although Good Vibes has been nominated eight times in the past. And the connections between boutiques were remarkable. Devioune explained another boutique that was up for the award shared a close connection to Mister Sister. “Self-Serve in Albuquerque,” she elaborated, “the person who owns it used to work for me. In the boutique category, half of them are lesbian-owned. It really says something about how we approach things. I’m really blown away by it.” Certainly, this is important for those seeking to support LGBTQ-owned businesses, and it may also speak to the distinctions between these shops and aforementioned mega-adult stores.

Bridgette, a regular customer, said that she sometimes goes into Mister Sister to browse and just chat with whoever is working the counter. “I love this place,” she said.