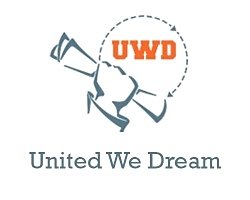 Delegation meets with U.S. Senator Elizabeth Warren’s office to say Time is Now For Inclusive Immigration Reform for ALL 11 Million Undocumented Workers
BOSTON, Mass. — On March 15 at 2:00 p.m., undocumented and queer immigrant activists from Queer Undocumented Immigrant Project, QUIP, Hispanic- Black Gay Coalition, Student Immigrant Movement, and GetEqual Massachusetts will talk to the press outside the JFK building in Government Center at 2:45 p.m., to launch a week of national coordinated online and grassroots activities for a direct path to citizenship for 11 million Americans without papers. Boston QUIP leaders will also meet with Senator Warren’s Immigration Specialist, Emily, where they will “come out” and tell their stories of growing up as an undocumented immigrant and queer person in the United States and the barriers of being queer, undocumented, and a of person of color. They will demand language in immigration reform to be LGBTQ-inclusive.
Alan Pelaez, grassroots organizer for QUIP in Massachusetts and Connecticut and self-identified undocumented and queer immigrant, claims, “We’re fighting for inclusive immigration reform that doesn’t leave anyone out—especially our LGBTQ community and immigrant detainees.  As Massachusetts residents, we will give voice to the pain our communities are feeling, as thousands of moms, dads, brothers, and sisters are deported every day to meet an artificial quota of 400,000 deportations per year. Queer rights and immigrant rights are directly intertwined.”
Undocumented students and allies will give Senator Warren’s aides rings to ask them to promise to wed LGBTQ immigrants and couples in a real inclusive immigration reform.
QUIP is a project of United We Dream, a national Immigrant-Rights organization: www.unitedwedream.org.
[From a News Release]