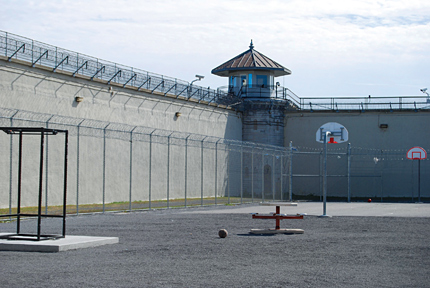 A new report co-authored by the Center for American Progress (CAP) and the Movement Advancement Project (MAP) highlights several severe disparities faced by LGBTQ people within the criminal justice system.

“Every day, we are filling our correctional facilities with people who wouldn’t be there if not for their economic status, color of their skin, sexual orientation or gender identity and expression,” said Naomi Golberg, a researcher for the Movement Advancement Project. “Then, within the system, they can experience abuse, sexual assault, and other forms of violence.”

Unjust: How the Broken Criminal Justice System Fails LGBT People was released in late February and identifies patterns of discrimination that not only force LGBTQ people into prisons and jails, but also contributes to abuses and disparities while incarcerated and after release.

The report noted three systemic problems that increase the likelihood of LGBTQ being arrested and funneled into prisons and jails.

The stigma surrounding differences in sexual orientation, gender identity and gender expression have created a culture of discrimination at work, school, within the home, and in the larger community. LGBTQ youth experience disproportionately high rates of family rejection and school expulsion that lead to homelessness and, quite often, sex work. Even LGBTQ adults in many states experience homelessness, unemployment, lack of affordable healthcare and severe income instability, all of which can force these populations into survival work that increases their chances of arrest and prosecution.

State laws that criminalize LGBTQ people and their behaviors have become rampant across the country. For example, 25 states have HIV-specific criminal laws, according to a 2015 report by the Centers for Disease Control and Prevention (CDC). Several states also criminalize consensual sex between LGBTQ people and drug enforcement statutes in many states disproportionately target low income communities and people of color.

“The criminalization of poverty, homelessness, sex work, and drugs are some of the key systemic attacks that lead to disproportionate incarceration of LGBTQ people,” he said. “The survival strategies of poor LGBTQ people, particularly youth and people of color, are targeted for criminalization.”

A second observation the report made involved unfair policing practices that hone in on “undesirable behavior,” such as sex work. The study noted that LGBTQ people and people of color have suffered disproportionately under these practices and have experienced physical and sexual abuse and even death.

Harsh and abusive practices experienced by LGBTQ in jails and prisons

Due to high levels of discrimination in the court system on behalf of judges, prosecutors and defense attorneys, the LGBTQ population is overrepresented in prison and jails, according to the Unjust report.

“…we have lawyers who fail to appropriately represent their clients and judges who give disproportionately long sentences,” said Reverend Lydon.

According to the National Inmate Survey (NIM), in 2011 and 2012, 7.9% of inmates in state and federal prisons identified as lesbian, gay or bisexual, while 7.1 percent in city and county jails identified as LGB. The 2012 Gallup poll identified 3.4 percent of American adults as LGBT across the country.

While incarcerated, LGBTQ inmates are more likely to experience abuse and discrimination at the hands of prison officials. LGBTQ people frequently end up in solitary confinement and transgender inmates are often misgendered and placed in units that do not conform to their gender identity, according to the report.

According to Reverend Lydon, in November, a female transgender inmate at a Boston correctional facility refused to be stripped search by a male guard at the facility, and requested that a female guard conduct the search. When she resisted, the male guards continued the strip search and she was forcibly held down while her clothing was cut off. She was then placed in solitary confinement, where she will spend 23 hours a day until April.

A 2014 study released by the Bureau of Justice Statistics, Sexual Victimization in Prisons and Jails Reported by Inmates purported that 24 percent of transgender people in prisons reported being sexually assaulted by another inmate.

Problems with housing access, employment, and financial stability are all significant barriers for LGBTQ people once released from prison or jail, the Unjust report concluded. After release, LGBTQ people often experience a lack social and financial support that can often lead to higher recidivism rates, similar to their straight and/or cisgender counterparts.

“Because the system is punitive, rather than rehabilitative, three quarters of those released are rearrested within five years,” said Goldberg. “Much of this is unnecessary, it’s inhumane, it’s costly, and it ruins people’s lives.”

Overcoming the cycle of discrimination and incarceration

The Unjust report offered several recommendations for combating the disparities and abuses highlighted in the study.

“Reforms at the federal, state, and local level are needed to ensure the safety and dignity of LGBT people—as they interact with law enforcement, to reduce criminalization, when incarcerated, and when they are trying to rebuild their lives,” said Goldberg, noting that policy change usally comes through lawsuits being filed by inmates.

“A few immediate campaigns we endorse include all efforts to abolish the use of solitary confinement…eliminate the sentence [of] life without parole…forbid the practice of strip searching any prisoners…decriminalize the sex trade…and end all mandatory minimum sentences, not just for drugs,” said Reverend Lydon of Black and Pink’s national efforts.

This summer, Black and Pink is slated to release part two of a national survey of LGBTQ prisoners, Coming Out of Concrete Closets: A Report on Black & Pink’s National LGBTQ Prisoner Survey. Part one of the survey can be found at www.blackandpink.org/survey/.