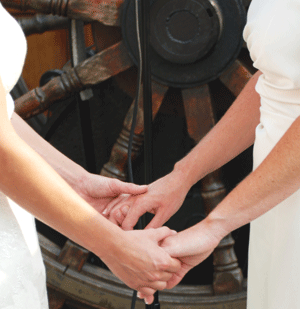 Yesterday faith leaders from across the state and country congregated in Providence, Rhode Island to speak out about the important of marriage equality for all families.

The President of the Unitarian Universalist Association (UUA), Rev. Peter Morales, and the General Minister and President of the United Church of Christ (UCC), Rev. Geoffrey A. Black, reflected upon the increasingly important role of the faith community in the fight for love, commitment and marriage for all families.

After years of work, marriage supporters here are as optimistic and motivated as ever as a vote approaches

Sunday’s supportive faith event is just the latest in string of strong faith initiatives and voices that have come out in favor of marriage for all families. The RI Council of Churches, the RI Board of Rabbis, and the UUA Legislative Committee have all spoken out in favor of marriage equality. In addition to Sunday’s strong display, an unprecedented number of clergy attended and testified at last month’s RI Senate Hearings, remaining at the State House until 5 am and providing upwards of twelve hours of testimony. This latest showing of faith support comes on the heels of the formation of Catholics for Marriage Equality, a growing group of Catholics in Rhode Island adding their voices to the fight.

Earlier this year the House of Representatives voted overwhelmingly in favor of marriage equality. We expect a vote in the Rhode Island State Senate this month.

HRC is committed to passing marriage equality in Rhode Island, the last state in New England to approve marriage legislation. We are proud to be part of the Rhode Islanders United for Marriage coalition and to work with dedicated staff and volunteers from Marriage Equality Rhode Island, GLAD, and many other coalition partners. Rhode Islanders can join us for one of our daily phone banks today.

To get involved and learn more about what you can do to help pass marriage in the Ocean State this year, please email amelia@riunited.org.