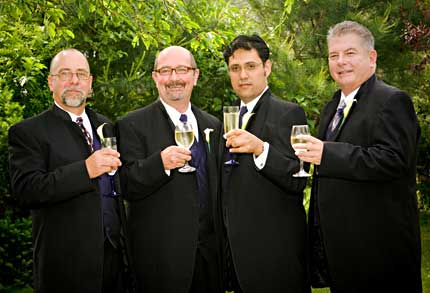 PROVIDENCE, R.I.—Beginning August 1, 2013, the state of Rhode Island will recognize same-sex marriage, a historical event brought on by the signing of a new law by Governor Lincoln D. Chafee, which will make same-sex marriage legal in all of New England.

Many people throughout the state said they are eager to celebrate this change, including Emily Douglas and Stephanie Storch who both live in Providence, RI. The two met early last summer and said they hit it off immediately. The marriage proposal came after Storch’s roller derby team, the Sakonnet River Roller Rats, had just won a competition. Douglas proposed to her in the car leaving the event. Excited to wed but unsure of whether it could happen in RI, the two say they hoped for the best.

“We knew that the vote was going to come up and we knew that there was a possibility of it going through in Rhode Island, but we didn’t know what the probability was and were prepared to go through with it in Massachusetts if need be,” said Douglas, whose wedding is set to take place at Colt State Park in Bristol, RI. “We were absolutely excited and set our date for August 10, 2013. We’re able to get our marriage license on August 1, 2013, so it just worked out perfectly for us.”

Although some Rhode Island couples shared their excitement to get married for the first time, others said they are looking forward to renewing their vows, especially Frank Ferri, a member of the Rhode Island House of Representatives. According to Ferri, the date has always been important to him because he first committed to his partner, Tony Caparco, on August 1, 1981. Since then the two were married in 2006 while visiting Vancouver, Canada, but they both grew up in Providence and said they are excited to have their marriage recognized by their home state.

“What got us to this point was the people in our community who were out. Out to their families, their friends, their co-workers, their employers. That was the most powerful [factor] that helped us get to the point where we could pass the law,” said Ferri. “That effort and the fact that we had Gordon Fox [Speaker of the RI House] supporting it was what made the final push.”

A longtime supporter of marriage equality in Rhode Island, Ferri has been testifying in favor of it at the Rhode Island State House since 1998. He eventually became the chair of the organization Marriage Equality Rhode Island, and became a Rhode Island Representative in 2007. Due to his longtime advocacy for LGBT rights, Ferri said he is planning to renew his vows under the direction of Representative Fox on August 1, 2013.

“Right now we’re planning to have a ceremony with some presentations because there are people we want to thank and recognize. Afterwards we want to have champagne and cake,” Ferri explained. “It’s a celebration for Rhode Island. It’ll be an event for the state more than anything.”

Another couple that was previously married, Bill Mann and Addie DelValle, said they are also happy to finally have their Rhode Island marriage license, but are undecided on whether it’s necessary for them to have a big ceremony.

“Our commitment and bond was sealed three years ago when we married and [we] don’t feel the symbolic need to re-marry here,” explained Mann, whose MA wedding included 100 friends, family members and co-workers.

The two were married in Attleboro, Massachusetts three years ago and completed living wills and other legal documents so that they could get as close to marriage benefits in Rhode Island as possible. Therefore, if any ceremony does take place, Mann said it would only include his husband and a few witnesses.

“After August 1 we will do all our paperwork and become legalized in RI. That way we can lead our lives like we normally do, be happy and just take it one step at a time,” said DelValle.