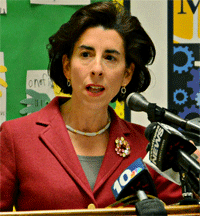 Today Governor Raimondo signed a bill sponsored by Senator Gayle Goldin and Representative Grace Diaz adding non-discrimination language to the Children’s Bill of Rights, a document given to all youth and posted at all programs serving youth in the care of the RI Department of Children, Youth and Families (DCYF). With this legislation, youth will be informed of their right to be treated free from discrimination based on race, sex, national origin, sexual orientation, gender identity, disability or religion. Senator Goldin and Representative Diaz worked hard for passage of this important legislation for young people involved in the child welfare system.

“Young people in state care are dealing with many challenges in their lives; discrimination should not be an additional barrier to success,” says Darlene Allen, Executive Director of Adoption RI, an organization that works to find permanency for youth living in foster care and residential facilities. “We need to make it easier for children to speak out about any potential mistreatment. This legislation informs them of their rights and helps them advocate for themselves.” [pullquote]“LGBTQ youth are disproportionately represented in these populations,” said Vickie Henry, Youth Initiative Director for New England LGBT legal rights organization Gay & Lesbian Advocates & Defenders. “This critical language will ensure that youth know they are protected from discrimination by law.”[/pullquote]

DCYF serves Rhode Island’s most vulnerable youth—including those who have been kicked out of their homes and those who are in the juvenile justice system. “LGBTQ youth are disproportionately represented in these populations,” said Vickie Henry, Youth Initiative Director for New England LGBT legal rights organization Gay & Lesbian Advocates & Defenders. “This critical language will ensure that youth know they are protected from discrimination by law.”

Kerri Kanelos, Executive Director of Youth Pride Inc, the statewide organization serving LGBTQ youth, also spoke to the importance of nondiscrimination language. “Young people in state care need to know their sexual orientation and gender identity will be respected. We know that LGBTQ youth often look for nondiscrimination language; seeing it within their Bill of Rights provides a level of comfort that could make a real difference in their lives.”

The passage of this legislation was applauded by the Child Welfare Committee for LGBTQ Youth, a coalition of child welfare professionals, legal advocates, and medical personnel who advocated its passage. Regina M. Costa, The Child Advocate, said, “Respect for the diversity of young people in DCYF care must be guaranteed; we hope this legislation will empower young people to address issues of discrimination they encounter or perceive. All youth must feel safe and protected in order to disclose their deepest needs.”