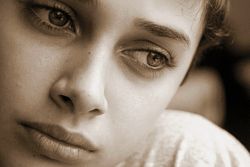 Good afternoon. My name is Mandy Lussier, and I’m the Safe Spaces Coordinator at Youth on Fire. Youth On Fire is a drop-in center for homeless youth ages 14 – 24 and an HIV prevention program of AIDS Action Committee. The center offers resources that meet basic human needs – like hot meals, showers, and clothing. Additionally, we also offer free, on-site, GLBTQ-friendly healthcare and therapy, bi-weekly support groups, and supported referrals to other ally agencies. We also deliberately hire staff, interns and volunteers that reflect the communities we serve which include having openly queer staff.

Of the approximately 650 young people who walk through our doors every year, about 30% self-identify as gay, lesbian, bisexual, transgender, queer or questioning. That number is totally disproportionate to the number of queer kids in the general population. What we know, and what the research bears out, is that GLBTQ-identified youth are much more likely to find themselves homeless than their straight peers. And when they find themselves homeless, the resources that are available to them are limited.

many of the challenges that queer homeless youth face are the same issues that straight homeless youth face. The difference is that a number of the issues and challenges are magnified by sexual orientation and gender identity. I could talk for days about the myriad of issues that queer youth face – from survival sex work to substance use to mental health to violence to employment to discrimination. But the issue I would like to focus on today is the lack of safe and appropriate shelter for homeless queer youth.

At Youth on Fire, we constantly struggle to find safe shelter for our members and especially for those who identify as GLBTQ. Many have had to flee their home or have been kicked out of their home due to physical, emotional, sexual, or mental abuse because of their sexual orientation or gender identity. Unfortunately, they then find themselves in shelters where they face the same abuse from their homeless peers and at times from staff themselves. Many times, our members will tell us that being on the street is safer for queer kids than being in a shelter – that staying outside, often alone and with no guarantee of food or any shelter, is the least dangerous place for a queer kid to be.

Even though it may seem ridiculous, it’s often true. To illustrate the point, I want to tell you a couple of stories.

I will start by telling you about B and R, both 22-year-old women. They have been in a relationship since they were 20 and were both kicked out of their family houses when they came out as lesbians. They had been staying at a women’s shelter on and off for a year, but they were forced to leave when they were outed and subsequently “caught” hugging – something that other clients were able to do without consequence or even a second glance. The two young women had been sleeping in the same room since their arrival, but after being outed by another client, they had to occupy separate rooms and were told that they could not be in the bathroom together even though all the other women could use it at once. After being caught hugging, they were suspended from the shelter for two weeks. They talked about wanting to file a suit against the shelter but decided not to because they had no other place to go and did not want to be on the streets. They were so worried about being retaliated against that they did not even file a complaint. They accepted their two-week suspension, during which they stayed outside, and went back to that shelter when it was completed.

Another story – this time from J, a 21 year old gay man. When asked to describe his experiences in the shelter system, he wrote: “When I was homeless in Cambridge, I stayed at one of the shelters. When I was there, I was under the impression that because of my sexuality, I was something of a joke, even to the staff. They didn’t make it obvious, but there was always that ‘Watch out for the gay boy in the showers” vibe. They also threw religion at you all the time, but that’s a related, but different issue. I often didn’t feel safe, and didn’t feel like I was valid when I was staying at the shelter. It often felt like they were subtly saying to me that they care, but that they would care more if I just didn’t sleep with men.”

The third story I want to tell you is about a man we’ve been working with nearly every day since we met him when he was 18. Now 24, we’ve seen him go through a lot in his life – from relationships to jobs to housing situations. One of the reasons his housing situation has been so volatile is because he’s never felt safe staying in Boston’s shelter system. Because he identifies as trans, there are few places that he feels safe in due to the lack of acceptance and understanding from both shelter staff and shelter residents. He’s never wanted to put himself in those dangerous situations. That leaves him with very few other options. In the past, and on-and-off now, he’s stayed by himself outside, he’s bounced from couch to couch whenever his friends could house him for a few days, and he’s found shelter in abandoned buildings or in building entryways. There shouldn’t ever be a reason that these options are safer than a shelter with trained staff and a roof over his head, but this is where he’s found himself since we met him 6 years ago.

This is just a glimpse of what homeless queer youth go through. It’s a small piece of the stories that we hear every day. These are just three stories – there are countless others who aren’t represented here but who deserve a voice and deserve a safe place to speak. I am here today on behalf of these young people, and I am here today to tell you that we can do better – this cannot be the best we have to offer.

I urge the legislature to find a way to make a queer youth shelter a reality.

Homeless queer youth are resourceful and resilient survivors, and they deserve to be sheltered in a place that is safe and accepting.

Thank you all for your time and attention to this issue. Together, I know we can make things better.