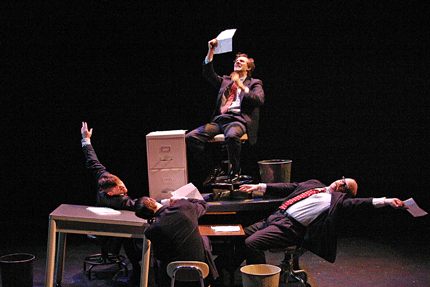 – James Bundy, Yale Rep Artistic Director
The internationally acclaimed Split Knuckle Theatre Company presents Endurance, a funny, physical and moving exploration of how the human spirit can conquer any obstacle with wit, humor, and invention. This original play, developed collaboratively by the company, has entertained audiences around the globe, and comes to Bowker Auditorium on Friday, October 16 at 8 p.m. Audience members are also invited to stay for a post-show talk by the company immediately following the performance.

Endurance is an office comedy fused with Antarctic adventure. The year is 1914: trapped in Antarctica with no hope of rescue, the great British explorer Sir Ernest Shackleton kept his crew of 27 men alive for two years in the most inhospitable climate on Earth. Ninety-five years later, in the worst economic meltdown since the Great Depression, Hartford insurance man Walter Spivey, struggling to justify his recent promotion and save his employees’ jobs, relives Shackleton’s story. Can one of the greatest leaders in human history inspire Walter to save his men? [pullquote]Split Knuckle Theatre is a critically acclaimed company that creates dynamic, physical, visually striking theater from simple materials. Their powerful theater engages the audience and performers in collective acts of imagination, using the expressive power of the human voice and body to tell stories that confront the wonders and challenges of life in our world.[/pullquote]

Although the play’s humor, music and hopeful ending belie its more serious overtones, Split Knuckle Theatre hopes to encourage strong political and moral soul-searching. How do we decide who to follow? How do we react in perilous situations? And the question that remains foremost in the minds of cast and creators: how will history judge our response to adversity?

Prior to their performance, the cast and creative team of Endurance will join psychologist Dr. Norma Johnson and UMass Geosciences Department Head Dr. Julie Brigham-Grette for an insightful talk on Shackleton’s Leadership Lessons, at 7 p.m. on Thursday, October 15. The free talk will be held on the 4th floor of the UMass Integrative Learning Center. The discussion will explore how Split Knuckle developed the piece, the psychology behind what it took to survive such harsh conditions, and lessons learned from science expeditions past and present. What does it take to lead and how do we decide who to follow?

Split Knuckle Theatre is a critically acclaimed company that creates dynamic, physical, visually striking theater from simple materials. Their powerful theater engages the audience and performers in collective acts of imagination, using the expressive power of the human voice and body to tell stories that confront the wonders and challenges of life in our world. The company develops innovative work in a style known as devised theater, a process that involves collaborative improvised work by a group of people (performers, writers, musicians, stage managers, etc.). There is no director in the traditional sense, since decisions are made through collaboration, debate and an extensive creation process, before the final, fixed work reaches audiences.

Split Knuckle was formed in London in 2005 by a group of performers trained in the work of the late French theater master Jacques Lecoq. Much of his Pedagogy is physically based and places the focus on collaboration and devised theater creation. Since then their performances have garnered critical acclaim, awards and audience appreciation in both the US and Europe.

Tickets for Endurance by Split Knuckle Theatre are $30 and $20; Five College, GCC and 17 and under $10. For tickets call the Box Office at 545-2511, toll-free at 800-999-UMAS, or purchase online at fineartscenter.com. This event is sponsored by the UMass Alumni Association and the New England States Touring program of the New England Foundation for the Arts.