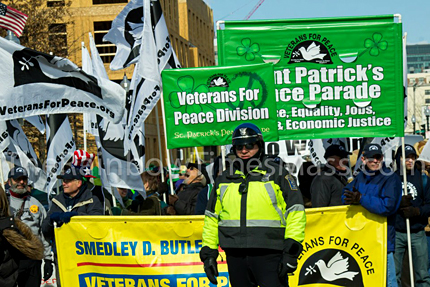 Local groups come together to speak out for peace, progress and LGBT rights; no comment from traditional parade officials

Thousands of supporters marched amidst a sea of rainbow flags, political posters and green everything on Sunday, March 17th for the Third Annual Saint Patrick’s Peace Parade, the Alternative People’s Parade for Peace, Equality, Jobs, Environmental Stewardship and Economic Justice. The Peace Parade took place after the official St. Patrick’s Day Parade in South Boston, which has banned lesbian, gay, bisexual and transgender (LGBT) and peace groups from participating.

“The official Saint Patrick’s Day Parade still discriminates against gay groups, LGBT groups, as well as others, like Veterans for Peace and other labor organizations, and we think it’s the same fight for all of us against discrimination no matter what community we are a part of,” said, Sylvain Bruni, board member of Boston Pride, who marched in the LGBT Division of the Peace Parade.

There were eight divisions in this year’s parade: Veterans, Peace, LGBT, Religious, Environmental (Climate Justice), Social and Economic Justice, Labor, and Political. Bagpipers, drummers, a duck boat, trolley, and many others marched alongside these groups, who although organized by divisions, claimed to march in solidarity for each cause represented in the parade.

Danny Factor, member of the state committee of the Massachusetts Green Rainbow Party and the Greater Boston and Assabet River chapters, commented on the unity he felt captured the spirit of his organization and their reason for participating in the Peace Parade.

“We believe that many of these ills that are often seen as separate are interconnected and we’re for an integrated approach,” said Factor.

Charlie Brackett, who marched with the Democratic Socialists of America, echoed those sentiments.

“We stand for peace and justice all over the world,” Brackett said. “Hopefully one day we’ll be able to have one big peace parade all together at the main parade.”

Edward Childs, who marched with the International Action Center and Unite Here, Local 26 under the Labor Division, said that he felt it was important to get back to the roots of the original parade.

“For me, as an Irish person, it’s important to revive the spirit of the Saint Patrick parade,” Childs said. “In Ireland, it’s actually led by the gay community and it’s a very political parade.”

Childs shared that the first Saint Patrick’s Day parade in Boston was an anti-colonial theme, but that later it was made illegal to include politics in the parade. He said that he and others were arrested in the 1970s for carrying signs that said “England out of Ireland.”

“It’s a labor spirit, it’s a gay and lesbian spirit, it’s an anti-colonial, anti-war spirit, it’s an anti-racist spirit, and that’s what we’re reviving. This isn’t something new. The other parade is a parade that took away what originally the parade was all about,” said Childs. “That’s why I’m here, because that’s what needs to be done. We need to be an inclusive community. We’re all under attack by the powers that be, and unless we’re united, we ain’t going nowhere. So if we want to go someplace together, we march together in our parade and we fight together after the parade.”

Nate Goldshlag marched with Veterans for Peace—the group that organized the Peace Parade—and also shared how he believes the parade has changed.

“The regular St. Patrick’s Day Parade has become very militarized,” Goldshlag said. “The military is in it, they’ve got weapons. They never let voices of peace be in the parade.”

Coro Allegro, a chorus for members and friends of the LGBT community, marched in the LGBT division but also noted their support for veterans’ causes. Their upcoming concert, “In Time of War,” will honor all who have served the U.S., including those who were silenced by Don’t Ask, Don’t Tell.

“Coro’s been a member of the LGBT community for the last almost 25 years, working on building bridges between those who have been marginalized and those who’ve been mainstreamed,” said Tanya Cosway, Coro Allegro president. “This is the perfect place for Coro to be.”

For many parade participants, the event seemed to be a space to celebrate progressive movements while also recognizing the work that still needs to be done. Erica Kay-Webster, who marched with the Stonewall Veteran’s Association from New York City and also represented the Cape and Islands Democratic Council, shared how the message of the Peace Parade personally resonated with her.

“Number one, I’m an actual Stonewall Veteran from 1969,” Kay-Webster said. “I transitioned with surgery at seventeen years old. I’ve been a female in this body for so many years. I have experienced so much discrimination in my life and I have fought back and lobbied. Whenever discrimination is so obvious and so blatant, I gotta show up.”

Although contacted by The Rainbow Times, The Allied War Veterans Council, organizers of the official Saint Patrick’s Parade in South Boston, could not be reached for comment.