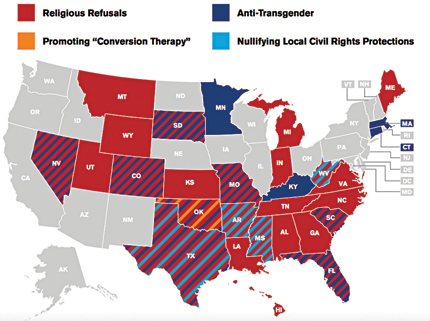 Despite heightened transgender awareness in the U.S., largely due to reality star Caitlyn Jenner’s emergence, the reality of transgender rights and struggles are daunting as violence and discrimination continues to surge, according to local and national officials.

“Nationally, 2015 was one the most horrific years for anti-trans violence, with numerous trans people murdered on the basis of their gender identity,” said Mason Dunn, executive director of the Massachusetts Transgender Political Coalition (MTPC) and co-chair of Freedom Massachusetts. “Each of the reported murdered victims were trans women, and the clear majority were trans women of color. Racism continues to drive transphobic bias and violence, and this must be addressed in our community.”

Twenty-two transgender people were killed in the U.S. in 2015, surpassing the homicides of 2014 just six months into the year, according to a recent report by the Human Rights Campaign (HRC).

“[We] will continue prioritizing our communities most impacted by violence, harassment, and systemic discrimination and marginalization,” said Kris Hayashi, executive director of the Transgender Law Center (TLC), a national organization that advocates for changes in law, policy, and attitudes so that all people can be free from discrimination regardless of their gender identity or expression. “This means a robust commitment to challenging the criminalization and policing of transgender people, particularly transgender women of color.”

According to an HRC release, “more than 115 anti-LGBT bills were introduced in at least 31 states in 2015. Because many state legislatures have provisions that allow bills to carry over into 2016 if they were neither enacted nor defeated, many of these bills are still pending.”

Currently in Massachusetts, non-discrimination legislation S.B. 735 and H.B. 1577, An Act Relative To Transgender Anti-Discrimination, is pending, as reported by The Rainbow Times last year.

“Our largest priority in 2015 was the introduction and advocacy for the non-discrimination legislation,” said Dunn. “Together with other groups and lobbyists, we’re working to ensure that non-discrimination protections for trans and gender nonconforming people extend to public spaces.”

Although the measure did not come up for a vote before the state legislature broke for winter break, Dunn is confident in its impetus.

“Already, we’ve seen great momentum in the new year, with support from all of the local professional [sports] teams: the Patriots, Celtics, Bruins, Red Sox, and Revolution,” he said. “We’ve also seen great political momentum, with statements of support from the Senate President, Senator Rosenberg, the Speaker of the House, Representative DeLeo, and Attorney General Maura Healey.”

Jennifer Levi, director of Gay & Lesbian Advocates & Defenders’ (GLAD) Transgender Rights Project, stressed the ramifications that such pending legislation has on issues such as healthcare and public accommodations. [pullquote]“Health access remains a high priority for all transgender people whether on public or private insurance plans and also for those who are incarcerated or detained.”—Jennifer Levi, director of GLAD Transgender Rights Project[/pullquote]

“Health access remains a high priority for all transgender people whether on public or private insurance plans and also for those who are incarcerated or detained,” said Levi. “We [the Boston-based organization] also continue our work [to obtain] equal treatment and access for all transgender people—including youth in schools, employees in workplaces, and people in accessing public accommodations.”

Hayashi said that programs serving the transgender community are one component in combating anti-trans sentiment.

TLC’s Positively Trans initiative is critical to assist in “ending the stigma around HIV and the erasure of transgender people living with HIV in federal data and [in] strategies to combat the epidemic,” he said. Through the agency’s TRUTH campaign, he explained, trans and gender nonconforming youth are empowered to build community around telling their own stories.

“The project seeks to pair community members with trained volunteers to work one-on-one throughout the name and gender marker change process,” he said.

Much to advocates’ efforts, strides have been made along the way.

“In addition to the [proposed] legislation, we were able to make a very important change to the birth certificate policies last year,” Dunn said. “It is no longer necessary to have surgery in order to change the gender marker and name on a birth certificate.”

And there is strength in numbers.

While Hayashi said that the TLC will continue its “critical work of challenging discrimination in employment, government, and legislative contexts” nationally, others like the MTPC and GLAD will tackle the issues locally and regionally.

Though GLAD primarily serves the New England states, the implications of its efforts are widespread and the organization is hopeful to continue to break down legislative barriers.

“… We will [also] be focused on family protections, and challenging the transgender exclusion in the Americans with Disabilities Act,” furthered Levi.

“We will continue to advocate in the State House, as well as in schools, businesses, health care facilities, local governments, [and more] to ensure that trans and gender nonconforming identities are treated with the respect and dignity we deserve,” Dunn emphasized.

For more information about the TLC, visit www.transgenderlawcenter.org. To learn more about the MTPC, visit www.masstpc.org or to get involved with Freedom Massachusetts check out www.freedommassachusetts.org. GLAD can be reached at www.glad.org and the HRC can be found at www.hrc.org.