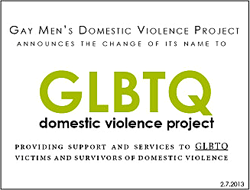 BOSTON, Massachusetts — The Gay Men’s Domestic Violence Project (GMDVP), a non-profit organization providing support and services to gay, lesbian, bisexual, transgender, and queer (GLBTQ) victims and survivors of domestic violence, is proud to formally announce its name change to the GLBTQ Domestic Violence Project (GLBTQ DVP). In 2011, the agency engaged in a strategic planning process where stakeholders acknowledged the diversity of GMDVP’s clients and expanded the mission to include all gay, lesbian, bisexual, transgender and queer communities.

Curt Rogers, Executive Director, established the agency in 1994 in response to being denied services from domestic violence agencies when fleeing an attempted murder. The initial goal of the agency was to provide support and services for gay male victims and survivors of domestic violence; however, by 2000, the agency expanded its focus to include bisexual men and transgender individuals.

“The name change reflects the work our agency has been doing for a number of years,” said Curt Rogers, Executive Director. “We hope that, by broadening our name, more victims and survivors in the GLBTQ community will know that we are a place they can turn to for support, shelter and services.”

The organization focuses on working with GLBTQ communities due to unique barriers that the populations face in accessing services,  including fear of negative responses from service providers based on individuals’ sexual orientation and/or gender identity/expression, as well as fear of being outed as GLBTQ. The Center for Disease Control and Prevention released a report in January 2013 that stated people who identify as gay, lesbian and bisexual experience domestic violence at a rate equal to or greater than their heterosexual counterparts.

Over the next few months the agency will be rolling out a new version of its website and print materials. “I think that our outreach model has historically focused on gay, bisexual and transgender men,” said Austin Bay, Outreach & Education Manager. “Over the next few months we are exploring ways in which we can increase our engagement with GLBTQ communities so that more voices and experiences are represented in our work.”

The agency ultimately believes that all victims and survivors deserve support and services that are culturally competent and that regardless of an individual’s sexual orientation and/or gender identity/expression people have the right to be treated with dignity and respect.

For more information, or for general questions or concerns, please call the GLBTQ Domestic Violence Project (GLBTQ DVP) at 617.354-6056.