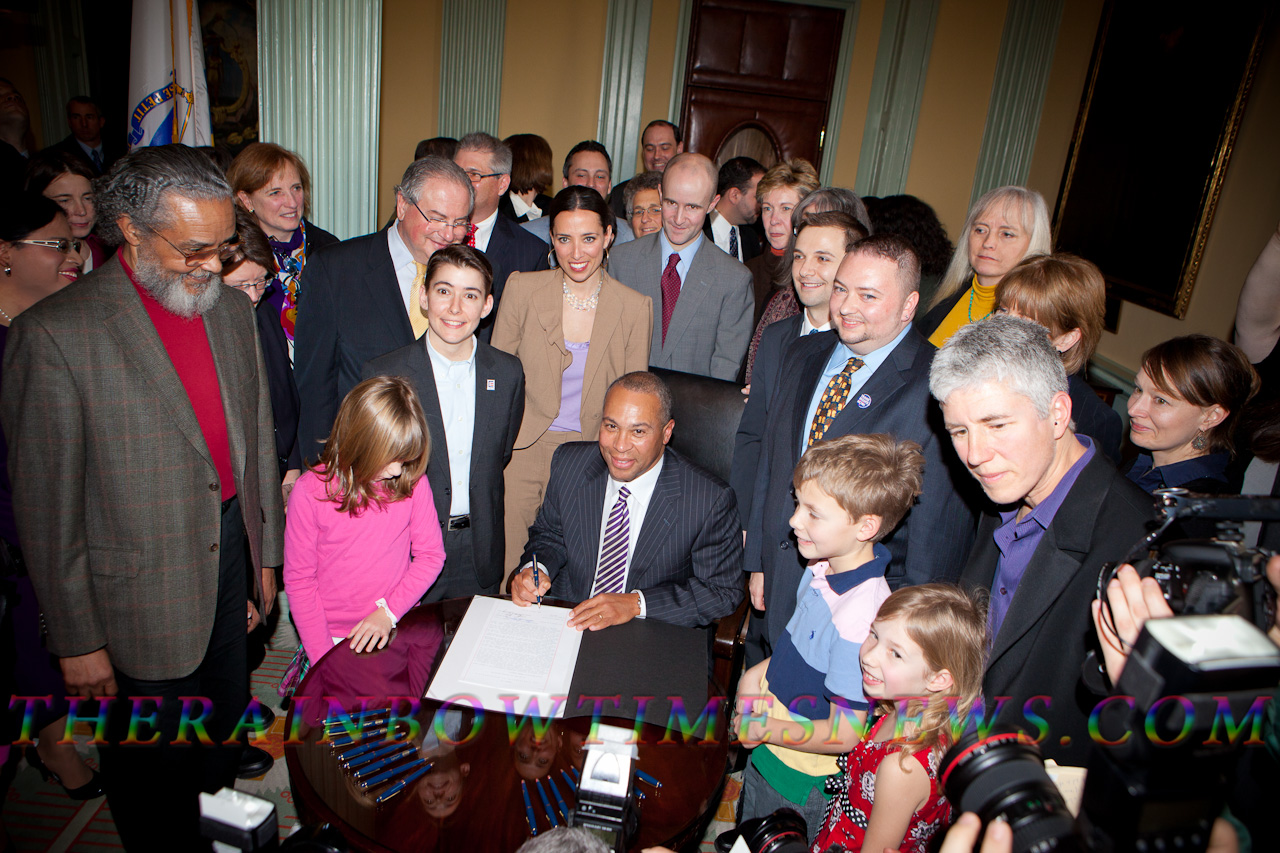 On November 23, 2011, Governor Deval Patrick signed into law H3810, An Act Relative to Gender Identity. This law adds “gender identity” as a protected characteristic to Massachusetts’ employment, housing, credit and public education anti-discrimination laws and to Massachusetts’ hate crimes law. All of these laws also protect several other characteristics, including sexual orientation, disability, sex, age, race, ancestry and religion, but this publication focuses on the transgender protections that H3810 provides. The law goes into effect on July 1, 2012.

How does the law define “gender identity”?

Must a person be able to prove his/her gender identity in order to be protected by the law?

Who does the Massachusetts employment anti-discrimination law apply to and what does it forbid?

The employment anti-discrimination law applies to employers (state, municipal or private) who have at least six employees (not including the owner or certain family members). It forbids employers from refusing to hire a person, or discharging them, or discriminating against them “in compensation, or in terms, conditions or privileges of employment” because of his/her gender identity. The law also applies to employment agencies and labor organizations (e.g. unions).

What is prohibited by the housing anti-discrimination law in Massachusetts?

The housing laws are intended to prohibit discrimination by those engaged in most aspects of the business of listing, buying, selling, renting or financing housing, whether for profit or not. Most often, these claims involve a refusal by an owner, landlord or real estate broker to sell, or lease, or even negotiate with a person about the housing they desire to obtain. But other practices are forbidden, too, such as inquiring into or making a record of a person’s gender identity or discriminating with respect to mortgage loans.

What protections exist under Massachusetts anti-discrimination law with regard to credit?

Any person who furnishes credit, such as a bank, credit union, or other financial institution, may not “deny or terminate such credit . . . or … adversely affect an individual’s credit” because of gender identity.

What is a “place of public accommodation”?

A place that holds itself open to, and accepts the patronage of the general public is a place of public accommodation subject to the non-discrimination laws. This definition is intentionally broad and may include a motel, restaurant, rest area, highway or hospital, as just a few examples.

What protections exist for transgender people in places of public accommodation?

The new transgender rights law does not contain explicit protections for gender identity. However, transgender individuals who face discrimination in access to places of public accommodation may, in some circumstances, be able to bring sex, sexual orientation or disability discrimination claims. If the adverse action results from sex stereotyping, that is the expectation that a person conform to the social stereotypes of how a “real man” or “real woman” must act, then this can be the basis for a sex stereotyping claim. However, there are limits to the ability to bring such claims since restrooms that are segregated by sex are exempt from the sex discrimination prohibitions under the public accommodations law.

How do I file a complaint of discrimination?

You may file in person or in writing at the Massachusetts Commission Against Discrimination (MCAD). The MCAD prefers for people to file in person, unless an attorney has prepared the complaint for them. Call in advance to set up an appointment and find out what you need to bring. For more information about MCAD and a list of the MCAD offices and phone numbers go to: http://www.mass.gov/mcad/. The complaint must be under oath, state the name and address of the individual making the complaint as well as the name and address of the entity he or she is complaining against (called the “respondent”). The complaint must set out the particulars of the alleged unlawful acts and (preferably) the times they occurred. NOTE: In some cases people can also file a complaint of discrimination with the federal government. In 2012, the Equal Employment Opportunity Commission (EEOC), which is the federal agency where employment discrimination complaints can be filed, announced that transgender people are protected under the federal employment sex anti-discrimination law, Title VII of the Civil Rights Act of 1964.

Do I need a lawyer?

No. The process is designed to allow people to represent themselves. However, GLAD strongly encourages people to find lawyers to represent them throughout the process. Not only are there many legal rules governing the MCAD process, but employers and other defendants are likely to have legal representation.

What are the deadlines for filing a complaint of discrimination? Complaints of discrimination must be filed at the MCAD within 300 days of the last discriminatory act or acts. There are very few exceptions for lateness.

What can I do if my employer fires me or my landlord evicts me because I filed a complaint of discrimination?

It is illegal to retaliate in these circumstances, and the employee could file an additional complaint against the employer or the tenant against the landlord for retaliation. “Retaliation” protections cover those who participate in proceedings, oppose unlawful conduct, or state an objection to discriminatory conduct.

Chapter 76, Section 5 of the Massachusetts General Laws prohibits gender identity discrimination in its public schools, whether committed by school employees or fellow students. The Code of Massachusetts Regulations (603 CMR 26.00) establishes certain actions that schools must take to prohibit the harassment or discrimination of students. In particular, the Code requires that all schools educate staff and students about Chapter 76, Section 5 and have policies in place to ensure that complaints of discrimination and harassment are investigated and appropriate action is taken against those who violate the provisions of the law. The Department of Elementary and Secondary Education is current revising these regulations to include transgender students. Also Massachusetts General Laws Chapter 151C defines fair educational practices and specifically prohibits sexual harassment by either teachers, staff or other students. Violations of this law can be brought to MCAD.

How does the Massachusetts’ law define what is a hate crime?

Under state law, a “hate crime” is “any criminal act coupled with overt actions motivated by bigotry and bias, including, but not limited to, a threatened, attempted or completed overt act motivated at least in part by racial, religious, ethnic, handicap, gender, sexual orientation or gender identity prejudice, or which otherwise deprives another person of his constitutional rights by threats, intimidation or coercion, or which seek to interfere with or disrupt a person’s exercise of constitutional rights through harassment or intimidation … ” It also includes any violation of several other laws.

What penalties exist for perpetrators of hate crimes?

Massachusetts law contains a “Hate Crimes Penalties Act” which provides stiff penalties for those who: commit an assault or a battery; or, cause damage to a person’s real or personal property; with the intent to intimidate a person because of his/her gender identity .

How are hate crimes tracked? In order to track hate crimes, the State has set up a reporting system so that incidents alleged are centrally recorded. To enter an incident of hate violence into the statistics, contact the Violence Recovery Program at Fenway Community Health, (800) 834-3242.

FOR MORE INFORMATION AND ASSISTANCE

If you have questions about the new law or any other LGBTQ/HIV legal issue in New England or need legal assistance, contact GLAD’s Legal InfoLine at 800-455-GLAD (4523) or go to http://www.glad.org/rights/infoline-contact. The Legal InfoLine is a free, confidential service where you will receive one-on-one assistance from a highly trained volunteer. The InfoLine is open Monday-Friday from 1:30-4:30 pm.