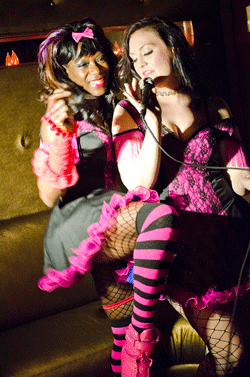 BOSTON, Mass. – The Theater Offensive presents its annual fundraiser ClimACTS!, (http://bit.ly/qsMAlH) the “can’t miss party of the year” according to the Boston Phoenix. Proceeds from ClimACTS! benefit underserved neighborhoods in Boston and LGBT youth programs. This year’s theme is Guilty Pleasures, alluding to the ubiquitous sexiness at all of The Theater Offensive’s provocative events.

Hundreds of the Boston LGBT community’s most influential and fun-loving folks will get together for delicious food, stunning celebrity performances, exuberant action on the dance floor, and the legendary fantasy auction. Auction items include one-of-a-kind encounters with Ellen Degeneres, the Red Sox vs. the Yankees, a walk-on-role on “How I Met Your Mother,” a luxury Bermuda resort getaway and our infamous global “Fluffer” package in Prague.

All proceeds benefit The Theater Offensive’s OUT in Your Neighborhood programs and True Colors: OUT Youth Theater (http://bit.ly/zOvVN0), a youth involvement and leadership development program for LGBT youth.

WHO: The Theater Offensive

OPEN TO THE PUBLIC: Yes (Tickets starting at $75: http://bit.ly/climACTS)

The Theater Offensive (www.thetheateroffensive.org/) grew out of the seminal street theater troupe United Fruit Company in 1989, led by current Executive Artistic Director Abe Rybeck. The creation of The Theater Offensive was a response to the founders’ experiences as activist members of underserved, marginalized communities and active participants in the early years of the Rainbow Coalition. Throughout its history The Theater Offensive has furthered its mission “to form and present the diverse realities of lesbian, gay, bisexual and transgender (LGBT) lives in art so bold it breaks through personal isolation and political orthodoxy to help build a more honest, progressive community.”

The Theater Offensiveʼs OUT in Your Neighborhood strategy works with locally and nationally-known artists and community members to create original, groundbreaking and interactive works by, for and about the LGBT community, as well as through education programs, year-round community-based workshops, intensive engagement with at-risk youth, and street theater performances.  Programming reflects the diversity of the city of Boston, gives voice to underserved LGBT community members, creates avenues for cross-cultural dialogue and breaks down the barriers of homophobia, bigotry and hate.