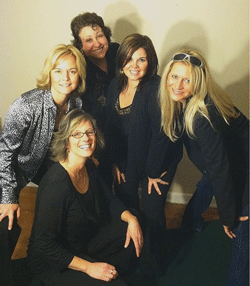 Ms BHaven at a Club near you. Photo by: Pam Standfest

Ms BHaven at a Club near you. Photo by: Pam Standfest

The all-female tribute band Ms BHaven has been working up quite a local following with their combination of jazz, Latin, R&B and rock music. Recently they have been recording a six-song album with producer John Bolduc in Manchester, CT. The core members consist of Amy Blaze, Amy Epperson, Sue Lopes, Lynn Tracey, and Dawn Zukowski.

Lead guitarist Tracey took the time to do an exclusive interview with The Rainbow Times.

Clara Lefton: How do you decide what new song you want to sing?

Lynn Tracey: We kind of read the crowd and we play a few different genres … what we’ve done is incorporate more R&B and they’ll just dance all night or some Latin and they go nuts. The age of the crowd seems to vary; we thought we’d appeal more to the 30-50 age group but because of [the television show] Glee it’s all age groups.

CL: What is the band’s dream venue to play?

LT: We’re hoping to play at the Mohegan Sun. A lot of local musicians will play there in the Wolf Den and it’s a free show if you’re a card holder, if you gamble or even if you don’t … We’d like to play at the Iron Horse [in Northampton, MA] too, it’s real intimate.

CL: How did you choose the name Ms BHaven?

LT: We really struggled with that, but we had friends on Facebook vote and we had this lame name we were just going to go with. Then my partner said, “How about Ms BHaven?” We have a sanctuary here and it used to be called Green Haven and it’s a safe haven for all of us ladies to chat. Then of course we do misbehave, at least I think we do back in our younger days but we’re well behaved now. But we like to try to connect back to our days where we rebellious and young. 3/5 members of the band are lesbians and it’s really fun because the other two kind of laugh and joke with us- they’re very open minded.

CL: What are some of your favorite songs to sing?

LT: I like “Rolling in the Deep” and I love “Send Me On My Way” by Rusted Root. Once in a while we’ll play Santana but those are my favorites. They’re covers but I have some originals that we’re going to start introducing.

CL: Who are you closest with in the band?

LT: I’ve known Sue the longest, but we all support each other and help each other through things that come up in our lives. Sometimes our rehearsals are great because if there’s something going on we’ll all vent a little, go to the music and by the end of the session it was therapeutic. We keep in touch via text messages and phone calls and we all joke a lot.

LT: We played at Black Eyed Sally’s [in Hartford, CT] for our first big gig. It was sort of our debut gig and it was incredibly packed. We had high energy, we were dancing—it was crazy there was a line out the door. I know there was a UConn game in town but all the other venues down the street were all open.”

CL: What is your recording schedule like right now?

LT: It has been every Sunday for three weeks. It’s 10-12 hours, either 2 p.m. to 12 a.m. or 2 p.m. to 2 a.m. You’re in another world and everything else outside of that world totally disappears. You have the opportunity to really try to help each other work through parts, be creative and really precise—you want to be perfect; there’s a little bit of pressure there but we joke around a lot with each other so we can just have fun with it. It’s been a great experience.”

The band’s next gig will be at Fred’s Brick House Café in Willimantic, CT on March 10 at 7 p.m.

For more info check out the band’s website at www.msbhaven.org