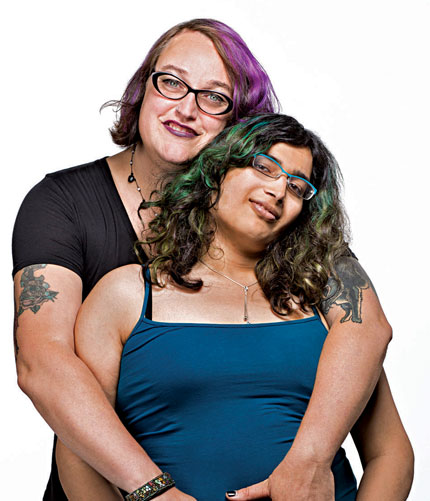 BOSTON, Mass.—In December, the LGBTQ community was rocked by the suicide of transgender teenager Leelah Alcorn, who ended her life after her parents rejected her trans identity. Alcorn posted a suicide note on the social media platform Tumblr, in which she expressed the hope that one day transgender people won’t be treated the way she was, said that her death needs to “mean something,” and asked readers to “Fix society. Please.”

As her death continues to be mourned, LGBTQ and transgender organizations are doing their part to take up Alcorn’s challenge, working to support transgender individuals and improve their treatment in society. One particular organization, Trans Lifeline, is a hotline run by transgender volunteers for transgender people.

“I became aware of the need through calling a national suicide hotline early in my transition,” said Greta Gustava Martela, founder and president of Trans Lifeline (with partner and co-founder Nina Chaubal). “A man answered the phone and asked me what was going on. When I started to talk to him about contemplating transition and my trans identity, I had to explain to him what transgender meant. It was immediately clear that he was uncomfortable with the entire topic. He got off the phone with me as quickly as he could.” [pullquote]One particular organization, Trans Lifeline, is a hotline run by transgender volunteers for transgender people.[/pullquote]

About a year later, Martela was working for a nonprofit and was in charge or responding to voicemails, many of which were from transgender people in crisis. After realizing the need, Martela founded Trans Lifeline. Currently, there are 80 trained volunteer operators for the hotline, and hundreds who have applied but have yet to be trained. Martela said they receive more than 400 calls per week.

“People are calling us primarily because of problems external to themselves. They can’t find a job or they are being harassed at the one they have,” said Martela. “They can’t get trans inclusive medical care and are struggling with dysphoria. With teens, the number one issue is parental rejection. Most of these issues are caused by social stigma and could be reversed with a few simple changes in the way we think about transgender people.”

The volunteers work to connect those who call in with the trans community and ensure they have local support.

“Trans people have the most trouble when they are isolated,” Martela said. “We try to help them imagine a future where things are better and then help them plan steps to get there.”

Martela also explained the importance of having transgender people staff the hotline. While cisgender allies are welcome to volunteer for the organization in other ways, all hotline operators are required to be trans* or non-binary identified. [pullquote]“Trans people have the most trouble when they are isolated,” Martela said. “We try to help them imagine a future where things are better and then help them plan steps to get there.”[/pullquote]

“A lot of people have told us that they’ve called other hotlines and found that the staff has no trans competency,” said Martela. “A person in crisis doesn’t need to be given a trans 101 seminar. Also, it’s about empowerment. It’s something that the trans community is doing for itself. We are free to do this in a way that works for trans people without the intervention of people outside the community.”

Martela shared how running the hotline has also been personally rewarding.

“The work is incredibly gratifying and healing. Every time I’m able to help someone who is in a desperate situation, it makes me feel a little less damaged by my own trauma,” Martela said. “I don’t do a lot of shifts on the line anymore, but I find our volunteers so inspiring. Many of the people answering these calls are in fairly dire situations themselves, and yet they are still thinking about how to help others. I’m humbled by them.”

Martela also believes Alcorn’s death could have been prevented if she’d had effective support from adults in her life.

“Most transgender people have difficult relationships with their parents. The social stigma makes it very difficult for parents to accept their transgender kids,” said Martela. “We need to change the equation of social pressure. If we could get everyone who has been on board with LGBT rights so far to put their money where their mouth is on the T in that acronym, things would change very quickly. Speak up and speak out in support of transgender people. We need bigotry against transgender people to be socially unacceptable. If you know a trans youth that appears to be struggling, the most important thing is to make sure that they have trans competent adult allies in their lives.”

Carly Burton, interim co-executive director of MassEquality, said that despite history being made when President Obama acknowledged transgender people in his recent State of the Union address, there is still much to be done.

“Across the nation, state-based and national advocates are working tirelessly to pass non-discrimination protections in education, credit and lending, health insurance, and employment so that transgender people can live and work and provide for their families as anyone else can,” said Burton. “In Massachusetts, we are fortunate to have non-discrimination protections in employment, housing, education, credit and lending but we are lacking protections in public accommodations or public spaces. We are the only state that has protections in all areas except public accommodations and gender identity is the only category that is protected in Massachusetts in some but not all areas. This inconsistency needs to be fixed.  One way to support the transgender community in the Commonwealth is to advocate for public protections.”

“Leelah’s tragic death highlights the insufferable pain and indignity many trans people face when dealing with the very common issues of transphobia and discrimination based on gender identity,” said Burton. “Whether perpetrated unknowingly by friends, family and co-workers or by outsiders who are cruel, the effect is the same. Leelah’s death is a prime example of why we must educate the public about the transgender community, embrace tolerance and acceptance of others.”

Locally, Fenway Health offers many services and support for the transgender community, including individualized crisis services and supports accessible to all patients in need. This can include behavioral health or psychiatric services, violence recovery supports and services, or referrals to partner programs that can meet the level of care needed. Coordinator of the Trans Health Program at Fenway, Ruben Hopwood, MDiv, PhD, shared his ideas for how people can better support transgender individuals in their lives and in the community.

All of Fenway’s primary care and allied health services are open to and welcoming of transgender and gender nonconforming people without restriction, Hopwood noted. They also offer training, education, and research across multiple bio-psycho-social areas of interest and treatment, and offer hormone treatments as appropriate.

“Advocate for the person and offer to get them to medical and mental health providers who are willing and knowledgeable in treating trans people from an unbiased, non-punitive approach that is supported by the professional standards of mental health and medical care,” said Hopwood. “Isolating people or threatening them or demeaning them is harmful. This is not the answer and this does not lead to understanding.”

“It is the responsibility of adults to protect children and youth from harm. This may mean that adults in a youth’s social world need to initiate conversations about difficult topics and offer hope, a listening ear, and resources, particularly if the adults in the youth’s immediate care circle may be harming the young person emotionally, psychologically, or physically,” Hopwood said. “It takes a community cooperating in avoidance to ignore problems and allow harm to befall others, and it will take the community cooperating intentionally to stop harming and start providing safety and supports to the most vulnerable and endangered people within it.”

Martela shared one more lesson she felt was learned from Alcorn’s death and message to the world.

“I think people are finally starting to get the message that you don’t get to choose who your kids are,” said Martela. “If you aren’t going to be able to love a trans kid, then don’t have kids.”

For more information on Trans Lifeline, including how to make a donation, applying to be a volunteer, and hours of operation, visit www.translifeline.org. For more on Fenway Health, visit www.fenwayhealth.org. For more on MassEquality, visit www.massequality.org or call 617-878-2300.