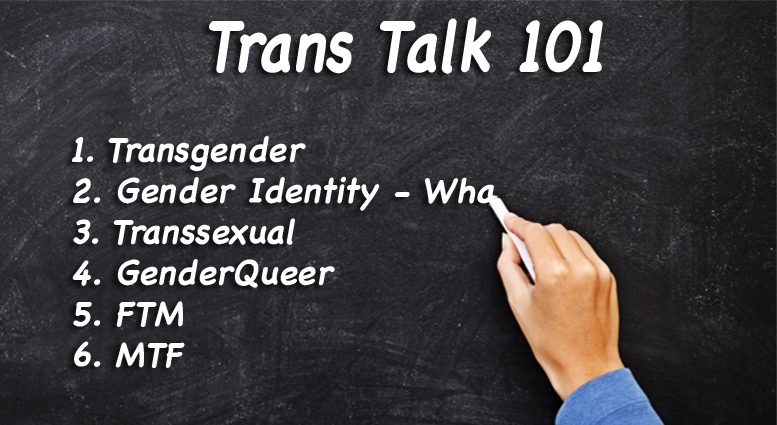 In an effort to gain a better understanding of the language used in transgender culture, The Rainbow Times has compiled a special three-part series to explore the rich and diverse terms used by the trans community. The first part of the series will explore a list of commonly—and not so commonly—used words and phrases used when discussing gender identity. The terms here within were compiled by some of the nation’s leading experts and advocates for the transgender community—The National Center for Transgender Equality (NCTE), Gay and Lesbian Alliance Against Defamation (GLAAD) and the University of California, San Francisco’s (UCSF) Center of Excellence for Transgender Health.

However, it should be noted that “some transgender people may not use some or all of these terms,” according to UCSF’s website. Language is powerful, so let’s get it right.

Transgender Man: A term for a transgender individual who currently identifies as a man (see also “FTM”).

Transgender Woman: A term for a transgender individual who currently identifies as a woman (see also “MTF”).

Gender Expression: External manifestations of gender, expressed through one’s name, pronouns, clothing, haircut, behavior, voice, or body characteristics. Society identifies these cues as masculine and feminine, although what is considered masculine and feminine changes over time and varies by culture. Typically, transgender people seek to make their gender expression align with their gender identity, rather than the sex they were assigned at birth.

Transsexual: An older term for people whose gender identity is different from their assigned sex at birth who seeks to transition from male to female or female to male. Many do not prefer this term because it is thought to sound overly clinical.

Cross-dresser*: While anyone may wear clothing associated with a different sex, the term cross-dresser is typically used to refer to heterosexual men who occasionally wear clothes, makeup, and accessories culturally associated with women. This activity is a form of gender expression, and not done for entertainment purposes. Cross-dressers do not wish to permanently change their sex or live full-time as women. “Cross dresser” replaces the term “transvestite.”

*Transgender women are not cross-dressers or drag queens. Drag queens are men, typically gay men, who dress like women for the purpose of entertainment. Be aware of the differences between transgender women, cross-dressers, and drag queens. Use the term preferred by the individual. Do not use the word “transvestite” at all, unless someone specifically self-identifies that way.

Queer: A term used to refer to lesbian, gay, bisexual and, often transgender, people. Some use queer as an alternative to “gay” in an effort to be more inclusive. Depending on the user, the term has either a derogatory or an affirming connotation, as many have sought to reclaim the term that was once widely used in a negative way.

Genderqueer: A term used by some people who experience their gender identity and/or gender expression as falling outside the categories of man or woman. They may define their gender as falling somewhere in between man and woman, or they may define it as wholly different from these terms. The term is not a synonym for transgender or transsexual and should only be used if someone self-identifies as genderqueer.

Bi-gendered: One who has a significant gender identity that encompasses both the male and female genders. Some may feel that one side or the other is stronger, but both sides are there.

Two-Spirit: A contemporary term that refers to the historical and current First Nations people whose individual spirits were a blend of male and female spirits. This term has been reclaimed by some in Native American LGBTQ communities in order to honor their heritage and provide an alternative to the Western labels of gay, lesbian, bisexual, or transgender.

FTM: A person who transitions from “female-to-male,” meaning a person who was assigned female at birth, but identifies and lives as a male. Also known as a “transgender man.”

MTF: A person who transitions from “male-to-female,” meaning a person who was assigned male at birth, but identifies and lives as a female. Also known as a “transgender woman.”

Transition: Altering one’s birth sex is not a one-step procedure; it is a complex process that occurs over a long period of time. Transition includes some or all of the following personal, medical, and legal steps: telling one’s family, friends, and co-workers; using a different name and new pronouns; dressing differently; changing one’s name and/or sex on legal documents; hormone therapy; and possibly (though not always) one or more types of surgery. The exact steps involved in transition vary from person to person.

Sex Reassignment Surgery: Surgical procedures that change one’s body to better reflect a person’s gender identity. This may include different procedures, including those sometimes also referred to as “top surgery” (breast augmentation or removal) or “bottom surgery” (altering genitals). Contrary to popular belief, there is not one surgery; in fact there are many different surgeries. These surgeries are medically necessary for some people, however not all people want, need, or can have surgery as part of their transition. “Sex change surgery” is considered a derogatory term by many. Avoid the phrase “sex change.”

Sexual Orientation: Describes an individual’s enduring physical, romantic and/or emotional attraction to another person. Gender identity and sexual orientation are not the same. Transgender people may be straight, lesbian, gay, or bisexual. For example, a person who transitions from male to female and is attracted solely to men would identify as a straight woman.

Intersex: A term used for people who are born with a reproductive or sexual anatomy and/or chromosome pattern that does not seem to fit typical definitions of male or female. Intersex conditions are also known as differences of sex development (DSD).

Drag Queen: Used to refer to male performers who dress as women for the purpose of entertaining others at bars, clubs, or other events. It is also sometimes used in a derogatory manner to refer to transgender women.

Drag King: Used to refer to female performers who dress as men for the purposes of entertaining others at bars, clubs, or other events.

Sex: The classification of people as male or female. At birth infants are assigned a sex, usually based on the appearance of their external anatomy. (This is what is written on the birth certificate.) However, a person’s sex is actually a combination of bodily characteristics including: chromosomes, hormones, internal and external reproductive organs, and secondary sex characteristics.

Gender Dysphoria: In 2013, the American Psychiatric Association released the fifth edition of the Diagnostic and Statistical Manual of Mental Disorders (DSM-V), which replaced the outdated entry “Gender Identity Disorder” with “Gender Dysphoria,” and changed the criteria for diagnosis. The necessity of a psychiatric diagnosis remains controversial, as both psychiatric and medical authorities recommend individualized medical treatment through hormones and/or surgeries to treat gender dysphoria. Some transgender advocates believe the inclusion of Gender Dysphoria in the DSM is necessary in order to advocate for health insurance that covers the medically necessary treatment recommended for transgender people.

In July, part 2 of the series, Trans Talk 101: Terms to know and avoid, will further discuss language in the trans community.