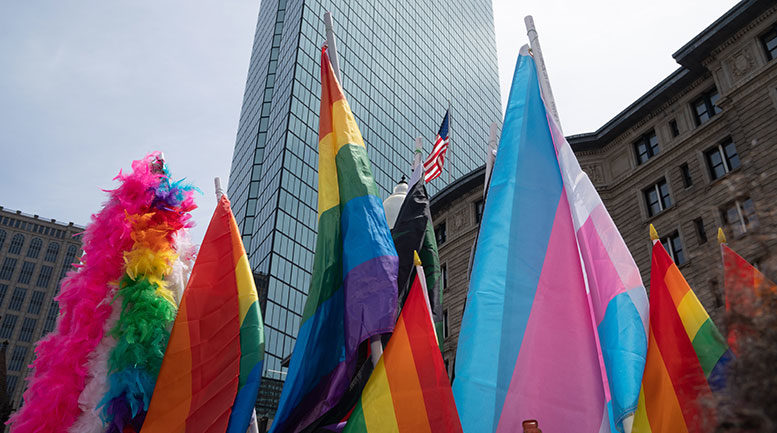 Last week, we celebrated the International Transgender Day of Visibility (TDOV) and it got me thinking about the role allies play in the struggle for trans rights. Being a part of a trans family, I’ve seen first hand the trials and tribulations that can come as a result of being “out and visible” to the general public. I’ve also seen the benefits when others validate, accept, value and uplift trans people and their voices.

In a society where trans people are still largely discriminated against and not protected by laws, depending on where they reside, it is not fair to expect members of the community to “out” themselves with visibility when it can get someone assaulted, bullied or killed (quite literally). Those trans individuals that do choose to be visible should be commended and celebrated without a doubt. However, there are also many people who simply cannot come out as trans for a variety of safety concerns—including the impact that it could have on employment, housing, family and friends’ acceptance, and simply just not being ready.

With growing pressure on trans people being “visible” and countless others announcing their gender identity on social media, the reality is that there are hardcore statistics that may cause some people to hesitate or refrain from doing it. And, that is ok too. If you are not visibly trans, it does not invalidate your identity, existence or your value to the struggle. We see you, honor and respect you.

Substantial portions of transgender people live in poverty largely due to bias, according to the National Transgender Center for Equality. Being visible becomes that much more difficult if your livelihood is at risk too. Trans people are four times more likely to have a household income of less than $10,000/year compared to the general population, reported the National Transgender Discrimination Survey.

“More than a quarter of transgender people report being denied a promotion, fired or not hired because of their gender identity,” according to Out and Equal’s 2017 Workplace Equality Fact Sheet. “More than three-quarters of trans workers take steps to avoid being mistreated.”

And, once job loss becomes a reality, catastrophic outcomes may occur.

Respondents of the NTDS indicated that they also experienced ruinous consequences such as four times the rate of homelessness, 70 percent more current drinking or misuse of drugs to cope with mistreatment, 85 percent more incarceration, more than double the rate working in the underground economy, and more than double the HIV infection rate, compared to those who did not lose a job due to bias.

When considering visibility there are some points that should be considered. Some trans people are automatically visible (even if they are not ready to be) by simply walking out the door. Others are able to flow through the day without anyone knowing about their gender identity. Circumstance in relation to how visible someone is depends on a variety of factors during the transition process. I believe Miss Major Griffin-Gracy summarized it best in a recent Facebook video published around the time of TDOV 2019.

“I really don’t understand why we need a Day of Visibility since for most of us, especially us black girls, we are as visible as we need to be,” said Miss Major, a Stonewall veteran and a fierce activist for trans women of color. “Our visibility is getting us killed. So, it’s not that we [trans people] need to be visible. I think the people who care about us, who are involved in our lives, and who know us, they’re the people who need to become more visible. They need to acknowledge that we exist, claim and show that they support us, and the best way to do that is talk about us in a positive light on our day of visibility.”

Being a transgender ally carries a great deal of responsibility with it. It is not about standing in the shadows or quietly proclaiming to support trans rights while sitting back and listening to others slander the trans community, or worse. Being an ally to the trans community or any marginalized community means being proactive.

According to the Young African Leaders Initiative, one of the many ways you can be an effective ally once you have listened and learned from the struggles of a marginalized group is to “educate your own community,” their website explained. “Your voice is most effective within your own group since you are in the best position to confront its stereotypes and misunderstandings, some of which you may have overcome yourself. You also have a special access to them as an audience that other communities do not. Use it!”

*Nicole Lashomb is Editor-in-Chief of The Rainbow Times and Co-founder of Project Out. She graduated from the esteemed Crane School of Music and obtained an MBA from Marylhurst University. Nicole can be reached at editor@therainbowtimesmass.com.