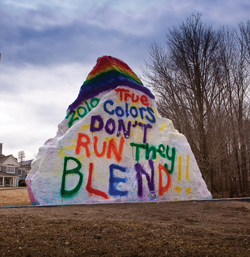 More than 2,500 LGBTQ youth and their allies will gather at the University of Connecticut on March 11 and 12 for the True Colors XVIII Conference.

The two-day event will feature speakers and over 125 workshops concerning issues regarding LGBTQ youth.

True Colors was founded in 1992 by Executive Director Robin Mchaelen, who was studying for her Master’s degree in Social Work at the UCONN School of Social Work.

The organization provides counseling and services for queer youth, including a mentoring program, Youth Leadership development with LGBTI youth and allies in Gay/Straight Alliances and other youth groups and advocacy work with legislators.

McHaelen organized the first “Children From the Shadows” (CFS) conference – Children From the Shadows: Lesbian, Gay and Bisexual Youth At Risk. The University of Connecticut, School of Social Work approved the idea of creating a conference about LGBT youth and the risks associated with sexual minority status. The Connecticut State Department of Children and Families gave their support as well as The Department of Education, Mental Health and Addiction Services. Both Connecticut Teachers Unions came on board, as did more than 30 grassroots community organizations.

This year’s conference will feature author and consultant Robyn Ochs, who is the editor of the Bisexual Resource Guide.

There will be a panel called Hidden Voices: the Lives of LGBT Muslims with queer Muslim activist Faisal Alim;Coming Out Bi in a Gay/Straight World, a workshop by A.J. Walkley, author of QUEER GREER, which tells the tale of a high school girl coming to terms with her bisexuality when she falls for a boy and a girl at the same time, and Supporting Caregivers of Young Children who identify as Transgender or Gender Variant with Nancy Meyer-Lustman, Ph.D., a New Haven-based clinician who has worked with many families of transgender and gender non-conforming children.

The event brings together not only queer youth, but their straight allies as well.

LGBT teens who have attended past conferences have described the experience as “life-changing,” said Harrington, adding “the e-mails and letters we get are amazing.”

Harrington explained that the youth-run workshops “give kids a chance to share their voice.”

The True Colors web site features testimonials from past attendees, including T.H, age 13: “I had no idea that there were so many gay youth just like me in Connecticut. I’m so happy being here.”

O.M., age 15, said: “This is my first year and I can’t tell you how good it makes me feel. The staff here is so helpful and kind!”

The conference attracts youth from Rhode Island, Massachusetts, and New York. Harrington said it is “the largest event of its kind in the country.”

The conference serves to empower queer youth, as well as educate them about the importance of doing work on behalf of LGBT issues, Harrington noted.

The new leaders of tomorrow are being created at events like True Colors 18, and will put them in a position to help their LGBT elders in the future.

“They will be taking care of us,” Harrington added.