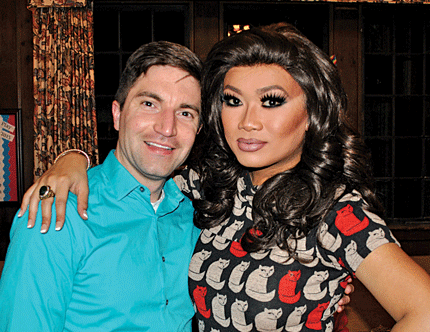 Umbrella, a MetroWest group serving LGBTQ teens—particularly those identifying as transgender and gender-nonconforming—offers life-changing support according to one of its alum.

“The experiences of transgender youth are extremely different even from LGB youth, and it has been so useful to me to have a specific trans space through the years, both when I desperately needed the extra support and assistance as well as now when I merely enjoy being around people with whom I share experiences,” said Jonah Miller of Needham, MA.

The frequent meetings include social and educational programming organized by facilitators and peer leaders.

The group has meant so much to Miller that he has even introduced it to friends.

The bi-monthly group grew out of an organization known as OUT MetroWest, a nonprofit that focuses on supporting LGBTQ teens in the Boston MetroWest area through a variety of curriculum and dialogue. Known as WAGLY or the West Suburban Alliance of Gay and Lesbian Youth, its flagship program launched in March 2011. Its first official meeting had over 30 youth from 14 towns.

Although the meetings’ success was overwhelming, according to its director, the youth attendance demonstrated the need for other services.

“It was clear from the beginning how important these weekly meetings were for [local] LGBTQ youth. But what was also clear was that over 40 percent of our participants identified as gender-nonconforming or transgender,” said OUT MetroWest’s Executive Director, Jack Patrick Lewis.

“At the request of a few of our youth peer leaders, we explored the creation of a specific program tailored to the needs of this population,” Lewis said.

In January 2012, only six months after WAGLY’s first meeting, Umbrella was launched. It required collaborations between Lewis, the organization’s Director of Programs Marie Caradonna, area therapists and community support.

“Our ultimate goal for the program is to provide a safe, supportive, social opportunity for our youth,” said Lewis.

According to Lewis, the group offers the teens a chance to be themselves.

“Umbrella is a place where our youth never have to justify their identity, are offered educational programs specific to their concerns, and can explore ideas or work through issues that affect them as teens and members the trans and gender-expansive community,” Lewis said.

The group has a dedicated following.

“What I find most interesting about Umbrella is how far people will travel to be a part of it. At that first meeting we had a youth who had driven over an hour to attend and even now we have people driving similar distances,” said Miller.

According to Miller, the popularity of the group is because it tailors to the needs of transgender teens.

“While there are plenty of LGBTQ youth groups around, trans-specific youth groups are lacking and many LGBTQ groups have many reported issues with inclusion and understanding of the ‘T’ in their acronym,” Miller commented.

Although Gay Straight Alliances have become more prevalent in high schools, the groups are not necessarily dedicated to anyone who fits outside of those categories, according to Caradonna. [pullquote]“While there are plenty of LGBTQ youth groups around, trans-specific youth groups are lacking and many LGBTQ groups have many reported issues with inclusion and understanding of the ‘T’ in their acronym,” Miller commented. [/pullquote]

“It is unlikely that a youth will have a teacher who is trans, or [who is] very well-educated about trans issues. Umbrella fills those gaps,” said Caradonna.

“Not only do we have knowledgeable adults who understand the struggles a trans/genderqueer youth experiences, but there are enough youth who participate in the program that a youth is likely to find someone who shares similar interests beyond their trans identity,” Caradonna said.

Since its inauguration, the program’s popularity has led to a variety of increased services, including two meetings a month instead of one. Meeting nights are designed to allow those with therapy or medical appointments the opportunity to attend if they were previously unable to do so. On average, meeting attendees can range from 12 to 24 youth.

“When I attended the first official Umbrella meeting ever, there were only four youth and two adults stuck up in the loft above the huge meeting room used for WAGLY. It’s amazing to me, many years later, to return on alumni nights and see the 20+ youth struggling to all fit in the significantly-bigger space than that in which we used to meet,” Miller said.

Umbrella meets on the first Wednesday and the third Thursday of every month from 6:45 p.m. to 8:30 p.m. The meetings are located at the Unitarian Universalist Society of Wellesley Hills at 309 Washington Street, Wellesley, MA. Aside from OUT MetroWest and Umbrella, its parent organization started offering in March 2015 a program for LGBTQ middle school youth. For more information about Umbrella and OUT MetroWest visit www.outmetrowest.org.