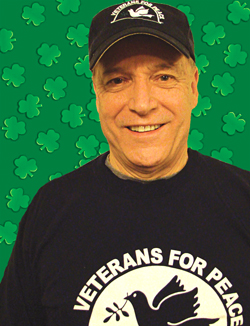 BOSTON, Mass.—Veterans For Peace applauds the decision by the Allied War Veterans Council to allow OUTVETS, a fledging new LGBT veterans group, to walk in the Saint Patrick’s Day Parade.

The LGBT community has been denied participation in the traditional Saint Patrick’s Day Parade for over twenty years. This certainly signals a step in the right direction.

“It is wonderful that this group can participate. Now what about the rest of the LGBT community and area peace groups? Now may be the time to invite Veterans For Peace and all the other LGBT groups and peace groups to participate in the celebration of Saint Patrick on this very special day,” said Pat Scanlon, a Vietnam Veteran, and the Coordinator of the Boston area chapter of Veterans For Peace. [pullquote]Five years ago Veterans For Peace applied to walk in the traditional parade and was denied. The stated reason for the denial was that the parade organizers “did not want the word peace associated with the word veteran.”[/pullquote]

Veterans For Peace is a national veterans organization with headquarters in Saint Louis, Missouri. The organization has 140 chapters and 4,000 members across the country. One of the largest and most active chapters is known as the Smedley D. Butler Brigade from the Boston area. Several members of the local chapter are life-long residents of South Boston yet are not allowed to march in the traditional parade because they advocate peace.

Five years ago Veterans For Peace applied to walk in the traditional parade and was denied. The stated reason for the denial was that the parade organizers “did not want the word peace associated with the word veteran.” For the past five years Veterans For Peace have organized their own “Saint Patrick’s Peace Parade, the alternative parade for Peace, Equality, Jobs, Environmental Stewardship, Social and Economic Justice,” that follows the same route as the first parade, but a mile behind.

“We think that the time has come to combine both parades and have one inclusive welcoming parade for all those wishing to celebrate Saint Patrick’s Day. Maybe this is year,” concluded Scanlon.

Veterans For Peace is the only veterans’ organization in the country that opposes war as an instrument of national policy, and advocates exhausting all avenues of diplomacy and negotiations before sending our young men and women into battle. Because of this stance veterans who have dutifully served this country, many who have experienced the horrors of war, are not allowed to participate in this historic parade because they now advocate peaceful resolution to conflict.