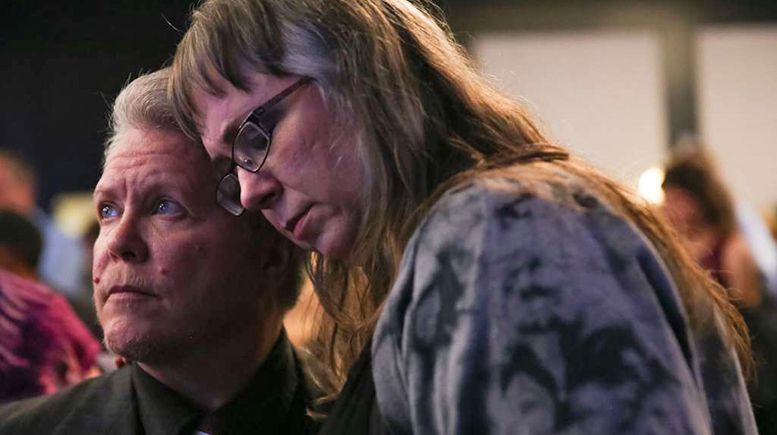 My husband is creating a movement—helping light a fire inside of all us to prioritize basic human rights and dignity across our country. He is empowering those who have felt like they’ve lived in the shadows. He’s shining a light on himself so that it can reflect onto them. Just as the first few people of color, women, gays, and lesbians who first ran for office affected all of us and our freedom, this is the next step. Mac spent life in a world opposed to the very core of his being. Having to learn how to listen to those who didn’t mesh with his very existence. He needed to see humanness in all people – it was the only way for him to survive. He thrived by building bridges, connecting communities and casting a far net aimed to unite the masses. This is precisely what we are facing as a country right now—we are divided and polarized. Every group is in its own corner fighting for their own dignity and safety. My husband brings us all together because together we can change the world.

Activists struggle, they put everything they have into changing the world. Changing hearts and minds to make the world better for everyone who lives in it. This is not a paid position. This is a labor of love. Mac was called to this way of life and has answered the call time and time again.

As a transgender man who lived as a lesbian in the Bible Belt of Florida for 40 years and also the child of a 16-year-old single mother with mental illness, Mac had to find ways to see the best in people. And he did, he never gave up on the fact that one person with heart and determination can make a huge difference. This carried with him when he finally moved to the “promised land” of Seattle where he could finally be true to himself in ways that even he had never imagined. After a lifetime of discipline, practice and dedication to Karate and his dojo where he taught women and children to defend themselves through empowerment, it was time to move to Seattle and live. Live as the person he always knew he was all along. He left everything behind because he knew that as the martial arts community eventually accepted his sexuality, it would be unlikely they would accept his social gender identity change.

Mac left his dojo, his very successful martial arts career, and his home. He came to Seattle and went quickly into social transition. As Mac was free to be himself, he realized how important it was that he help other people be able to do the same. He realized that he could use his public speaking skills and dedication to empower others to change hearts and minds and to inspire people to be true to themselves. He dedicated himself to social justice and civil rights. He was appointed by the Mayor Mike McGinn to be an LGBTQ Seattle City commissioner. This distinguished position helped open the doors to make real policy change.

As an out transgender man who openly and publicly uses his own struggle to educate and eradicate hate, he accepted the fact that people would often times despise him and that his life would, at times, be at risk. When I agreed to marry Mac, I did so understanding that risk. That even in “the promised land” there is much work to be done. He worked to pass marriage equality. He helped pass transgender protections and health care for city employees, gender neutral bathrooms, and helped create a trans-inclusive Seattle Police Department policy and training syllabus that is now used with every officer on the force, to name only a few of his recent accomplishments.

I pay attention to the work that Mac does every day. The difficulty of meeting people in the middle to guide towards change. Putting himself in the line of fire for so many judgements. Not being able to fight for rights without someone feeling it was done wrong.  I have in my life experienced discrimination for my sexuality as well as being a teen mother yet never this publicly. There are criticisms from all sides, from the people who fight against his basic human rights to people from within his very own community. People who don’t understand his heart and even people who want him killed. What I want every single one of them to understand is that Mac McGregor does everything he possibly can to create a world where all people can be true to themselves—where basic human rights and dignity are simply common sense. He fiercely advocates for all people and truly believes that our country is only as strong as our most marginalized communities. And the really cool thing about all this beautiful ideology and his living example is that he actually does know how to make the changes that will put this plan into action.

Mac sees that building bridges, not walls, is the answer. Celebrating our differences and learning from one another is of critical importance. Transforming our tolerance of hate through understanding and compassion is in his heart. This is why I chose to spend my life with this man. This is why I believe in him. This is why.