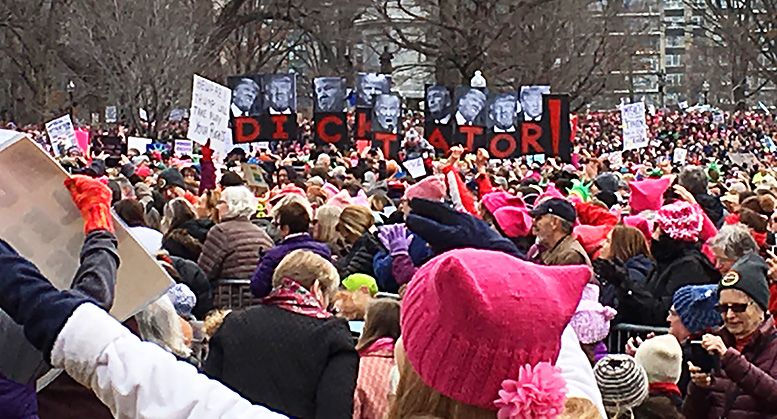 The Women’s March was held globally, to send a stronger message to Trump, but his response speaks volumes of what’s to come; Get ready for more!

The Inauguration didn’t go so well for Donald J. Trump, at least not according to photos circulating widely comparing President Obama’s 2009 inauguration to Trump’s 2017 swearing-in. Reports from social networks, TV, web and print media took to the wire by firestorm. The photos originally came from the U.S. National Park Service Twitter account. It was retweeted as an “observation from New York Times reporter Binyamin Appelbaum” on Friday as he wrote: “Compare the crowds: 2009 inauguration at left, 2017 inauguration at right.” The tweet contained images from both events showing a very obvious difference in crowd size. Imagine, Trump and his people had said over and over via TV coverage that the crowds were “huge,” using a word he’s most notable for overusing in his limited vernacular, even claiming to have drawn-in the largest crowd ever. However, CNN, along with various media cited approximately 250,000 attendees, a relatively small crowd for an initial inaugural event.

The retweet has since been deleted.

Rising up against the Trump administration’s dismissal and mockery of women, our issues and reality of what this presidency means to us, we showed up in droves. Millions of women, girls and allies took to the streets across the globe to express not just solidarity in progressive ideals but to represent a movement, a mobilization of people who stand for equality in support of marginalized communities—including women. These are the same marginalized communities that Trump venomously attacked throughout the campaign season—people of color, immigrants, members of the LGBTQ community, the disabled, Veterans, Mexicans, Muslims, etc.—and even worse post-election. What is worse, is that he lost a real opportunity to address women and other disenfranchised groups’ concerns in lieu of this worldwide march. Trump’s response? It was mostly not a response at all to the giant crowds. He merely took to Twitter and ask “Why these people didn’t vote?” We did vote and you lost according to our votes, Mr. Trump. But like you said throughout the election cycle, the system was rigged—in your favor.

No matter how much it was said, or the estimates on the size of the crowds nationally and internationally (over 3.3 – 4.6 million, and still going), still there was no acknowledgment from this President about it until this morning, and it happened only in the form of a complaint. According to an editorial by the Boston Globe, “The Trump administration’s response, in contrast, was a juvenile outburst.”

Anyone would think that given his low #Inauguration numbers and approval rating—a historical low at just 40 percent when entering office—that he would have addressed the #WomensMarch happening around the nation differently. Yet, he continued to go on without addressing the issues that matter to the majority of the American people. How he has responded to the Women’s March on Washington and sister marches around the country and globe, has proven just how unfit he is to serve the people, all of us. TV Ratings, Twitter and Inaugural crowds have been his primary focus over the last 48 hours.

The women and allies who marched did so taking time from their schedules and monies that many didn’t have to take a stance and send a strong message to the administration they are not going to be passive watchers any longer. Of course, not everyone has the education, the means or the time (juggling at times two or more jobs) to be a full-time activist or do what others can do. One thing was clear from the #WomensMarch: “It is not over and you will be held accountable, Mr. Trump.” We are watching, we are paying attention and if anything the women’s march proved—we will not be silenced and we will mobilize to take you on, even if it means showing up on your front step. Like the #BostonWomensMarch’s Agenda reads: 10 Actions/100Days – “But our march forward does not end here. Now is the time to get our friends, family and community together and MAKE HISTORY.” Check out the Guide to these steps here.

According to March organizers, efforts were not in vain as a nationwide and global movement has sparked. Despite massive numbers participating in women’s marches worldwide, the next step in this demonstrative process is critical. We’ve proven that we can mobile and organize. Now, what do we do with it? Strategy is pivotal in phase 2. One thing I know for sure is that complacency is not an option. Remember that revolution (#TheResistance) spoken about so fervently throughout the Democratic primary? It’s begun.

The messages in speeches throughout the country, the crowd numbers domestically and internationally, and the messages depicted on the signs proudly carried at the march painted a picture of distress, of deep concern for the violation of human rights and of grassroots activism. Although not everyone can be an activist in the same way, many of these women and allies were activists yesterday. The mere fact that we got up, participated, made signs with messages against this administration stances on women’s rights, #LGBTQ rights, #ACA, marginalized groups, etc. is a testament to our intent, all while standing on our feet for hours to make your opinion and vote count, to hold Trump accountable and to make our voice heard. The opposition is always loud, and we proved we can be louder.

Trump’s reactions to the #WomensMarch, even though it wasn’t just about celebrities or votes:

Watched protests yesterday but was under the impression that we just had an election! Why didn't these people vote? Celebs hurt cause badly.

Wow, television ratings just out: 31 million people watched the Inauguration, 11 million more than the very good ratings from 4 years ago!

4.75 million people, 673 cities, 0 arrests. Women took the lead. The work has just begun. What will you do tomorrow? pic.twitter.com/QUbdHU3T5d

#WomensMarch went global. Here are some of the cities that participated around the world: pic.twitter.com/8Yed6NNJFS

#WomensMarch is just the beginning.
We will not tire.
We will not falter.
We will not lose heart.
WE WILL NEVER, EVER GO AWAY!#StopTrump pic.twitter.com/ixKQZrwNjv

The #WomensMarch in downtown St. Louis! This is what democracy looks like. pic.twitter.com/mzb5xMZUKC

And laws only apply to others, not him, or can be understood by his people:

Kellyanne Conway says she "didn't see the point" of the #WomensMarch ➡️ by @aterkel https://t.co/ScMxwF2Xfb pic.twitter.com/IaYyPTokSP

And, when Trump doesn’t have an original thought, there’s always flattery for the man who did, even if he won’t admit it. Plagiarizing seems to run in the family.

NOTE: Comments for this story will only be posted if your e-mail and phone numbers can be verified.

*The author, holds an MBA from Marylhurst University and a BM from SUNY Potsdam, the Crane School of Music. Nicole can be reached at: editor@therainbowtimesmass.com.