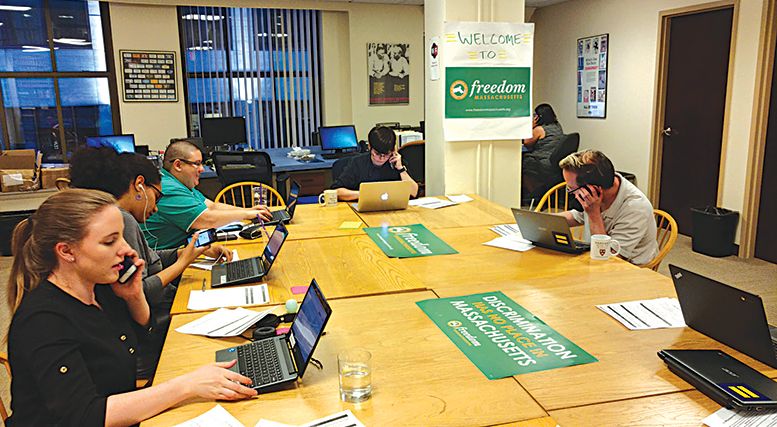 Transgender people in the commonwealth still fear for their trans rights

BOSTON—Throughout Pride Week celebrations this year, you may hear one word come over and over again: referendum.

Less than a year after it was signed into law, legislation in Massachusetts providing transgender people equal access to public spaces will be the subject of a question on the Commonwealth’s November 2018 ballot. Voters statewide will need to affirm or deny support for the measure after a request to overturn it received the signatures necessary to add a referendum.

At a time when the political landscape seems to change daily and news comes and goes in an instant, spreading and maintaining awareness about this issue between now and next fall are priorities for local advocates of trans rights.

Freedom Massachusetts, a bipartisan coalition of business leaders, elected officials, and LGBTQ advocates, is leading the campaign to educate voters on the referendum and uphold the existing law.

Mason Dunn, Freedom Massachusetts co-chair and executive director of the Massachusetts Transgender Political Coalition, said Pride Week provides an opportunity to educate voters who might not be aware that this change is on the table.

“We’re looking at this month-by-month and week-by-week,” Dunn said. “Pride events will give us an opportunity to educate and talk to our base and our community about what’s happening.”

Dunn said that education is critical based on what he’s hearing from the community.

“Most people we talk with know that the law passed last year … [and] …that these rights are in effect,” Dunn said. “However, they are unclear about what [a] referendum is and what it means. They don’t even know that this will be up for a vote in 2018.”

Keep MA Safe, an affiliate of the Massachusetts Family Institute (MFI), is leading the push to repeal the law. The group collected the 32,375 certified signatures required for a referendum within the mandatory 90-day window after the bill was signed into law last July.

The signatures were certified by the Massachusetts Secretary of State’s office in October and were among the more than 60,000 total collected by Keep MA Safe across the Commonwealth.

Like Freedom Massachusetts, Keep MA Safe will spend much of the next 18 months spreading the word among its constituents to secure a vote in support of repeal next November.

“We are extremely grateful to the thousands of people who courageously signed the petition, at times in the face of threats and intimidation,” Keep MA Safe said in a news release. “As voters began to learn about the full impact of this law, we saw them often move from alarm to action.”

The Rainbow Times attempted to interview a representative from Keep MA Safe for this article, but the request was declined.

Both groups will work with the Massachusetts Attorney General’s office to craft the ballot question in a way that’s clear and easy for voters to understand.

“She [Massachusetts Attorney General Maura Healey] has worked with all sides, we trust she’ll be fair,” said Kasey Suffredini, Freedom Massachusetts co-chair and acting CEO of Freedom for All Americans. “We will be asking voters to affirm what legislators did. A ‘yes’ vote supports the status quo.”

Suffredini said he thought the referendum might happen, but there was no way to know for sure until the signatures were certified. He said the signatures collected represent less than 1 percent of the Commonwealth’s population and the transgender protection bill was passed by a supermajority in the state House and Senate and signed by a Republican governor.

Given that history, Freedom Massachusetts expects that voters will cast their ballots in favor of the law next fall.

“We are absolutely confident that voters will want to uphold fairness for their neighbors,” Suffredini said. “All this question does is essentially repeal the statute that legislature passed.”

Suffredini said the effort to overturn the law is part of a larger campaign to curb rights for LGBTQ people across the country. Similar efforts are underway in Montana and Washington state.

“This referendum was not triggered by the passage … of our bill [in] 2016 … it’s long been part of the playbook for the same people who oppose marriage equality,” Suffredini said.

The existing law in Massachusetts remains in effect between now and the vote next year. In the event that the veto request is successful, Suffredini said Freedom Massachusetts would work with the legislature to pass the law again.

However, the debate that will happen between now and then is likely to increase the negative rhetoric surrounding what advocates view as an already stigmatized and marginalized community.

Janson Wu, executive director of GLBTQ Legal Advocates & Defenders (GLAD) said the group is preparing for ads that portray members of the trans community as predators and may even incite bigotry.

“This referendum contributes to the climate of hate that already exists,” Wu said. “People in our community are afraid and feel vulnerable, especially after the elections [and] the climate of hatred that has consumed our country.”

“It’s important that voters in Massachusetts reject this just like they rejected efforts to roll back marriage equality,” Suffredini said. “We are the firewall and there are lives at stake.”