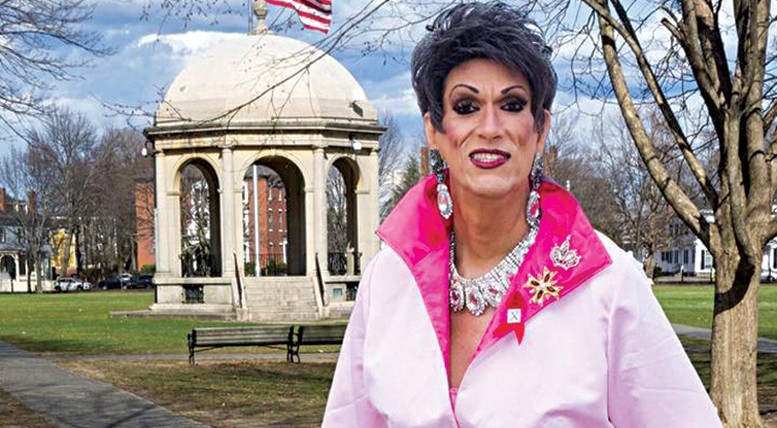 Not every town can say they have their own official drag queen, but in Salem, Massachusetts, Duchess Gigi Gill holds that title proudly.

Since 2011, Gigi has been doing work to increase the inclusion of LGBTQ people in their respective North Shore communities. Gigi worked with Salem’s Mayor Kim Driscoll and other town figures to start up the recognition of World AIDS Day, get their own pride parade, and put Pride stickers on businesses that can be safe zones to LGBTQ people. From there, Gigi has also raised Pride flags outside the town halls in Peabody, Danvers, Salem, Beverly, and Gloucester, and has put on meals for elderly LGBTQ people such as her award- winning Over the Rainbow Dinner Club.

“We’re lucky to have her living in Salem,” Mayor Kim Driscoll said in a recent phone interview.

Gary Gill, the man behind the makeup, originally comes from Indianapolis, where he was removed from an abusive home at the age of 6. From there, he was in the foster care system and after many attempted runaways, finally got himself out to New York City at the age of 14. He found a community of other homeless kids like him in the city and eventually met International Cristal, the queen who taught him everything he knows.

His travels didn’t end there as he got himself down to Daytona Beach, Florida, then to Long Beach, California, and back to Florida to end up in Miami and settle down with his partner, with whom he owned a clothing store. After his partner got sick and went to live his last days with his parents, Gigi finally moved to Boston to settle down with Robert James “Jimmy” Webb in Salem, where they were together for 31 years.

Jimmy passed away in September of 2014 in Care Dimensions hospice care where Gary was by his side every moment he could be. Gary later on shared the details of the high-quality care Jimmy received with the American Hospital Association. The AHA eventually awarded their Circle of Life Diamond Award to Care Dimensions, noting their commitment to diversity.

Gary then told his story in support of the care he received from the hospice group, which got them their Circle of Life Diamond Award, an award it had not received for seven years because they were not considered diverse enough to receive.

When Jimmy became ill, Gigi was born and started doing her public work.

“It was him that pushed me to get involved so that I had something to do when he was gone,” Gigi said. “We knew he wasn’t doing so well.”

From there, Gigi’s first World AIDS Day was held in 2012 after approaching Mayor Driscoll about how important it was to the LGBTQ community.

“Gigi not quite barged in, but she paid us a visit,” Mayor Driscoll said with an endearing laugh. “She’s hard to say no to. Salem is very inclusive, but Gigi helped us show our outward support.”

That same year, Gigi encouraged Salem to hold its first North Shore Pride Parade. The parade is still going strong to this day stretching from the Post Office to Salem Commons, but this isn’t the only form of work Gigi has done for LGBTQ people.

Gigi worked with the police to get new businesses to put rainbow flag stickers on their windows to advertise that they are a safe zone for LGBTQ people. She knew that in October, Salem is filled with tourists who may cause trouble for people who want to let their true colors fly in the streets for Halloween, so these stickers marked businesses people could duck into if they were being harassed. The first business to display a rainbow triangle was the New England Dog Biscuit Company.

“She came in when we were first opening and came to the ribbon cutting with the mayor,” Dennis Bourgault, original owner of the New England Dog Biscuit Company, said. “It was nice to have someone greet when you open a business and encourage the inclusivity. The rainbow sticker idea was just good all around. We get gay and lesbian couples that are happy to come in and see we are a welcoming store.”

Gigi has been helping LGBTQ people in their golden years also. On the second Tuesday of every month, LGBTQ seniors are served dinner at the House of Seven Gables for the Over the Rainbow Dinner Club.

In 2012, Gigi was given the Area Agencies on Aging Award at their conference in Washington D.C. for her work with North Shore Services in putting on this dinner. With how huge of a success it has been, Gigi has also started a lunch program.

On the third Wednesday of every month, Saint Peter’s Church in Salem holds the “Rainbow Lunch Program.” Gigi said that it was great because a lot of the seniors can only get around using forms of transportation that only run during the daytime.

“A lot of these people don’t have places to go,” said Debbie Barber, who helps Gigi with the senior meal programs. “A lot of people are coming in and have a place to do their crafts and just having conversation.”

At the first lunch, Debbie said that 18 people came but by the second time around, they had 30 in attendance. They both hope to keep this popularity going and Gigi’s personality definitely makes it easy for people to go.

“If she doesn’t know you, she will walk right up to you,” Barber said. “She will introduce herself to everyone; she’s not shy at all.”

It’s this warm personality that has made Gigi so well-liked in her community and has made everyone she’s interacted with hold her in such high regard.

“She really is a good person,” Barber said. “She would do anything for anybody. Sometimes she gets misunderstood, but bottom line: she is such a good person.”

“She’s a very strong individual and very much unafraid of anything,” Bourgault said. “She’s a great ambassador for the city for inclusivity and it’s been a pleasure knowing her. I grew up in Danvers and just a few years ago, everything was closeted. With Gigi around, it’s a lot better.”

“She’s got a heart of gold for her community,” Mayor Driscoll said. “She helped us embrace members of the LGBT community and I think people love her for her heart even more than her LGBT work.”