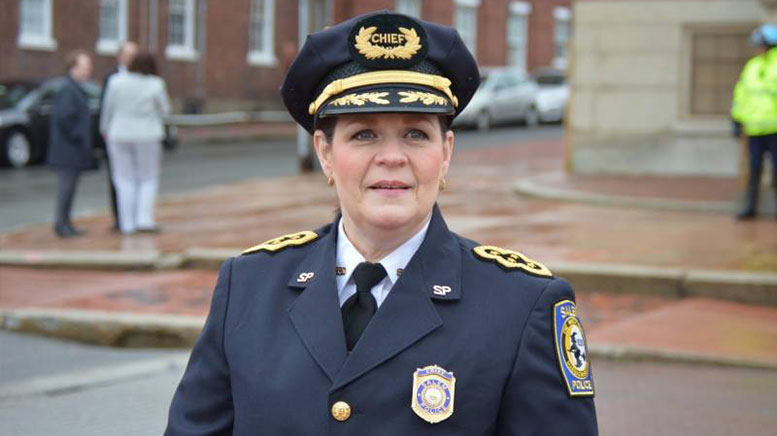 Salem Mass. Chief of Police Mary Butler who is the first woman appointed to such a position in 2015 by Mayor Kimberley Driscoll; Photo: City of Salem

After a distinguished 33-year career with the Salem Police Department, Chief Mary Butler moves to a new position in the community

SALEM, Mass.—Salem Police Chief Mary Butler today announced that she will retire from the Salem Police Department on July 31, after 33 years of service to the community as a police officer, including the last five years as Chief.

“Throughout her career, Chief Butler has demonstrated the utmost professionalism in her approach to policing and true leadership in the department,” said Mayor Kim Driscoll. “Salem and our police department have been well served by Chief Butler. As Chief, she helped usher in positive changes to the department’s policies and practices, expanded the Citizen’s Academy and public engagement with neighborhoods, oversaw the safe opening of the recreational marijuana industry in our city, led public safety efforts for four incident-free Haunted Happenings, and improved the diversity of the department’s personnel. At a time when policing in this nation is under a high degree of scrutiny, Chief Butler has never deviated from her belief that the role of the police officer is to serve all, protect all, and lead with integrity.”

“It has been an honor and privilege to work for the City of Salem and the Salem Police Department for thirty-three years, the last five as the Chief,” said Chief Butler. “I would like to take this opportunity to thank Mayor Kimberley Driscoll for her confidence in me, the City Council for their support, and the residents of Salem for sharing their feedback, praise and yes, criticism—we honestly cannot work in partnership without it. Most importantly, I would like to thank the men and women of the police department for their loyalty, hard work, and dedication to serving the community and the law enforcement profession. 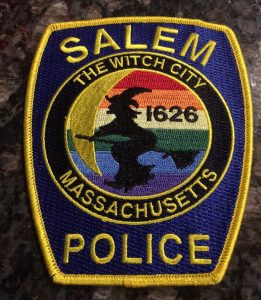 ng as a police officer was been a dream of mine since I was twelve years old. That dream became a reality when I was sworn-in in 1987 and it has been such a pleasure to have made that dream a reality for the past thirty-three years. Choosing this path in life has enabled me to be part of this wonderful community and given me the opportunity to be part of a team of people that make Salem a place where people want to live, work and raise a family. Horace Mann said, ‘Doing nothing for others is the undoing of ourselves.’ Doing nothing was never an option for me. Thank you for giving me this opportunity to be part of this great police department and this great community.”

Chief Butler was promoted from Lieutenant to Acting Captain in the Salem Police Department in December 2014. In that capacity, she was commanding officer of the department’s special operations division. She has served with the Salem Police Department since 1987, where she has overseen patrol division and the community impact unit as a Lieutenant, served as public information officer and detective, and worked as administrative aide to former Chief Robert St. Pierre. In 2015 Mayor Kim Driscoll appointed Butler to the position of Chief, making her the first woman Chief of Police in the community’s nearly 400-year history.

Upon Chief Butler’s retirement, Captain Dennis King will become the Acting Chief of the Salem Police Department during the search process and until the Mayor appoints a new permanent Chief.

Chief Butler will become the Director of Security at the Peabody Essex Museum, a role that safeguards the museum’s facilities and collections while enhancing the visitor experience and strengthening the museum’s ties with the community.

EDITOR’S NOTE: Chief Butler was in charge of the SPD when The Rainbow Times‘ newspaper box explosion happened in downtown Salem in August 2016. She was instrumental in the handling of the case and its subsequent guilty verdict for those who committed the crime.

Chief Butler also lent her voice to issues impacting underserved communities within Salem. She served on the Sanctuary for Peace Ordinance Committee and her expertise was critical in drafting the ordinance and police policy to protect immigrants from ICE by refusing to provide assistance to assist ICE that would result in the deportation of non-criminal Salem immigrants.

Under her leadership and to represent inclusion of the LGBTQ+ community within the Salem Police, Chief Butler arranged a Rainbow Design of the Official Salem PD patch.