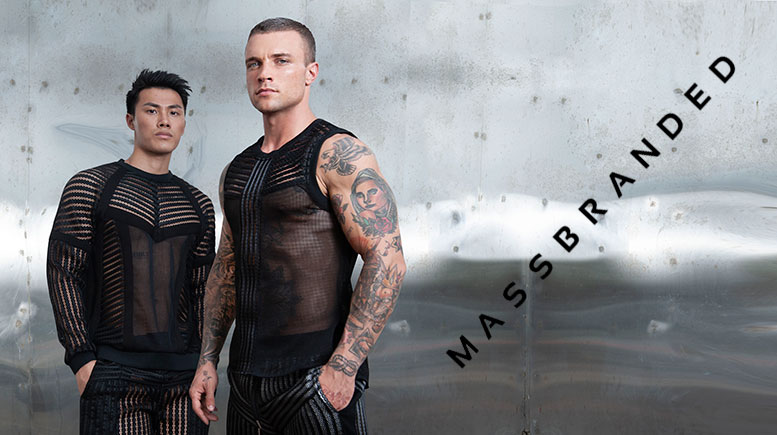 By: Tom Lagare/Special to TRT—

Puerto-Rico-born fashion designer Mass Luciano worked with top brands including Guess, Rock & Republic, and Lee Jeans before setting out on his own to launch his energetic namesake streetwear label, MASSBRANDED.

MASSBRANDED, the high-end men’s streetwear label that pushes boundaries, revs style engines and leaves nothing—and everything—to the imagination, is out now with “Fierce”, the next collection in its popular Mesh Series. Inspired by paratroopers and designer Luciano’s own childhood memories living on military bases, the collection combines complementary tops and bottoms to create a uniform for the progressive, active man.

As with all gear from MASSBRANDED, “Fierce” appeals to image-conscious, super social young urban professionals, as well as to boys who brunch, pop stars, extroverts, and exhibitionists.

Heading a label was something he never imagined he could do. Bullied as a child, he battled an inner voice that told him he could never be good enough.

Winning the title of Mr. Gay World five years ago changed all that. It set Luciano on the path to fashion icon.

Tom Lagare: What was it like to grow up gay in Puerto Rico?
Mass Luciano: I was bullied for being gay before I even knew what being gay meant. Luckily for me, my parents were very supportive and encouraged me to stand up for myself and fight back. But that feeling of being an outsider never left. The moment I graduated high school, I moved from my small town in Arecibo to the big city of San Juan, where I found my tribe and felt at home. 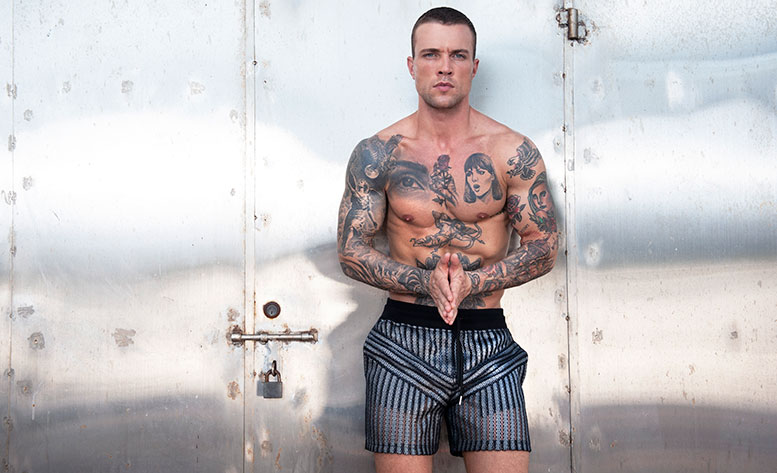 Q: When did you leave the island?
A: I left a few days after my 22nd birthday. I chose Los Angeles because it was far from the island and I hoped to find a job working for the many brands based in L.A. After studying at the Fashion Institute of Design and Merchandising (F.I.D.M.), I landed my first job at GUESS as Design Room Coordinator. I learned so much and was eventually promoted to Associate Designer.

Q: Did being a person of color make it easier or harder to break into the fashion industry?
A: Thankfully, the companies that I worked for were all very diverse, with people of all different nationalities and backgrounds. I think that’s what makes fashion interesting, you are judged on your work and performance. I’ve seen cases where people have been hired based on connections, but if they don’t have talent, they don’t last long. It’s a very competitive industry.

Q: You must have been a confident young man to enter – and win – Mr. Gay World!
A: I’m Puerto Rican and beauty pageants are a national sport but honestly, most of my confidence is ‘put on’. It’s like that saying, “fake it ‘til you make it.” As hard as it was growing up gay, it forced me to learn the power of projection. The way you present yourself really influences the way people see you. That little voice inside telling me “you’re not good enough” is always there and I try my best to challenge myself to prove that voice wrong.

Q: How did winning Mr. Gay World lead to you launching your own fashion label?
A: I designed most of the styles that I wore for the Mr. Gay World competitions. It was important for me to stand out among the other contestants with a unique look. After winning the title, my partner challenged me to launch a collection, and together we created MASSBRANDED.

Q: What inspires your collections? 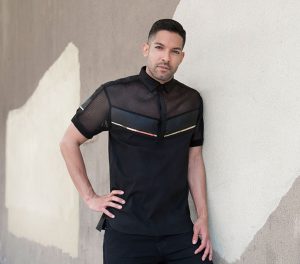 A: The ideal of masculinity. I reimagine it for the modern world. I’m inspired by people who are courageous and outspoken. Also, my military upbringing influences my work and style. That’s why you’ll see military fatigues, physical training uniforms, and tactical sportswear in my collections. I love how they can be casual yet elegant and dressed up. For me, it’s always striking when you see a complete head-to-toe uniform look.

Q: The new capsule collection is called “Fierce.”
A: The “Fierce” collection is inspired by athletes and the pursuit of excellence. I take classic sports silhouettes, like basketball uniforms, and give it a street edge that’s provocative and perfect for standing out in the club or at music festivals.

Q: Can you see the guys in Puerto Rico sporting the gear?
A: Absolutely! The styles are designed for guys who want to show off a bit of skin and look sexy. I think Puerto Rico guys can relate to that.

Q: Any plans to head back to the island after the pandemic ends?
A: Yes, I try to visit at least once a year.

Q: Do you have any advice for young LGBTQ kids in Puerto Rico?
A: My advice to young LGBTQ people is this: Don’t let anyone define who you are, only you can do that. Find strength in knowing that there is no one in the world like you and don’t try to be someone else. Focus on the things that bring you happiness and if possible, change the things that bring you down. The world is not an island, so get out there, explore, grow with love, and live with purpose.

Stepping out and standing out is MASSBRANDED’s call to arms. From boozy brunches to backstage parties, every MASSBRANDED design is created for occasions where standing out, in the most flattering way possible, is essential.

Designs reshape a man’s body to its maximum form. Horizontal lines are added to make shoulders broader and chests bigger while vertical lines are employed to elongate a man’s body for that taller, slimmer look.

With over fifteen years of experience in the fashion industry, Puerto-Rico-born Mass Luciano studied at the Fashion Institute of Design in Los Angeles and has worked with international brands including Guess, Rock & Republic by Victoria Beckham, and Lee Jeans. His rise to fame began in 2015 when he competed for and won the titles of initially, Mr. Gay Hong Kong and ultimately, Mr. Gay World. The accomplishment inspired him to launch his energetic namesake streetwear label, MASSBRANDED, available exclusively at MassBranded.com. Follow on Instagram @mass_branded.