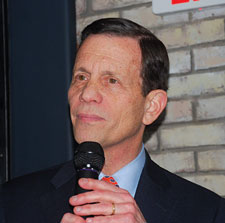 BOSTON, Mass.— As the Massachusetts gubernatorial race accelerates, two Democratic candidates are already staking out turf among LGBT voters, hoping to shore up early support before heading into the state party convention. So far, state Attorney General Martha Coakley and state Treasurer Steve Grossman have secured considerable followings within the gay community, with Grossman’s recent fundraiser as just one measure of his strong LGBT backing.

“We’ve done our job and contacted more than 1,700 people to let them know of our support for Steve Grossman,” said Carl Rosendorf, speaking to a fundraising gathering at Cinquecento in April.

Rosendorf introduced special guest Howard Dean, former Vermont governor and 2004 presidential candidate, who spoke, as others did, to Grossman’s character, noting “integrity” as a defining attribute. Grossman was an early supporter of Dean’s failed presidential bid despite the candidacy of native son John Kerry, then a Massachusetts U.S. senator, who became the Democratic Party’s nominee that year in an unsuccessful attempt to unseat President George W. Bush.

“Steve is who he is and believes in who he is,” said Dean. “He says things he believes in and is not afraid to take unpopular stands.”

“Barbara gets credit for that,” Dean explained, referring to Grossman’s wife, who served as the first straight MassEquality board member during the battle on Beacon Hill to protect the Supreme Judicial Court’s landmark 2003 Goodridge decision.

In introducing him, Dean said, “I think Steve Grossman is going to be the next governor. He’s a strong campaigner. He is going to be out there doing all the things a candidate needs to do to be governor. I think people have confidence in his integrity, and that is the most important quality that is lacking in Washington, D.C.”

Grossman’s campaign literature, specifically targeting gay voters, touts the him as “a champion, for equality and LGBT rights,” as well as his support for “fundamental values that shape MassEquality’s work for LGBT social justice, including the battle for marriage equality.”

MassEquality, the statewide, grassroots LGBT advocacy organization, has not yet endorsed any candidate in the gubernatorial race.

The campaign flier notes Grossman’s chairmanship (from 1997 to 1999) of the Democratic National Committee (DNC), where he re-established the DNC’s gay and lesbian caucus and hired the committee’s first full-time director for gay and lesbian outreach.

Last year, the company served as one of the amici curiae, or friend of the court, briefs in United States v. Windsor, arguing that the federal Defense of Marriage Act (DOMA), “forces us to treat one class of our lawfully married employees differently than another, when our success depends upon the welfare and morale of all employees.”

In its landmark Windsor decision, the U.S. Supreme Court struck down Section 3 of DOMA, the provision banning the extension of benefits and recognition of same-sex marriage by the federal government.

More recently, Treasurer Grossman, along with others in the “investment community,” called on large corporate sponsors of the 2014 Winter Olympics in Sochi, Russia, to speak out against discriminatory, anti-gay laws in that country.

For his part during brief remarks, Grossman spoke to what he called “the four most important words in the English language,” which, he said, “are the fundamental principles upon which the republic and this Commonwealth are based: equal justice under the law, carved in granite on the front of the U.S. Supreme Court.”

Grossman also spoke to the bravery of LGBT people in the crowd and beyond for “courage” in coming out and standing up for “equal rights” and “to demand equal justice under the law—to be beaten for it and to be put in jail for it.”

In the same breath Grossman made those remarks, he gave a shout out to Robert Isadore and his husband David Velasco Bermudez of Yarmouth Port. The former is chairman of Cape and Island Democrats; the latter is a veteran of the Stonewall Rebellion, a spontaneous uprising that occurred June 28, 1969 at a New York City gay bar between police and patrons and which propelled the growth of the modern LGBT civil rights and liberation movement.

“That’s courage,” Grossman said, referring to Velasco Bermudez’s activism at Stonewall. “There is no one in the room who does not understand what that means.”

Grossman’s remarks also touched on mainstream themes of his campaign, including pre-Kindergarten learning for the “30,000 three to four year olds, who don’t have a place in school to learn how to read,” he said.

“We say we lead the nation in educational achievement,” Grossman continued. “We don’t lead the nation when we leave 30,000 [kids] behind,” adding, “Oklahoma has had universal pre-K since 1998.”

Yet another theme he addressed was “a commitment to create 50,000 new manufacturing jobs in the state over the next five years.”

Altogether, he remarked, “This is no time for timid dreams. It is time for big, bold imaginative ideas.”

Taking a shot at the presumptive GOP nominee, Grossman said, “I am going to send Charlie Baker back to Swampscott for the second time in four years.”

Grossman’s support for LGBT rights, fairness and social justice, throughout his professional and personal life as businessman, party activist, state treasurer, and now candidate for the corner office, resonated among those in attendance at the South End fundraiser.

“He is the most liberal candidate,” said Claire Naughton of Foxboro, co-chair of Bay State Stonewall Democrats. “He can win.”

“He is one of the most decent, smartest people whom I have met,” said Dorie Clark. “He is also someone who genuinely has a sense of integrity in his private and personal life. He has impressed me as a human being. He’d be an exemplary governor.”

“He’s the real deal,” said Tom Gerace. “He stood up with the gay community when other leaders would not stand up behind us, when it was for most people unthinkable. He is the kind of person I want to lead the Commonwealth.”

“He has a passion for people that is rare in politics,” said Dee Dee Edmondson. “I’d put it this way: the personal touch. He understands what that means, and with that he has great foundation to lead and make good policy.”

In attendance at the gathering were Rosenberg and Malia, who commented on Grossman’s ability to lead on LGBT issues.

“Being able to speak and willing to speak honestly, clearly, and forthrightly from the heart about what equality means—that this is our obligation and the promise of the Commonwealth,” said Rosenberg, would enable Grossman to “use the bully pulpit” and from that would “flow a series of policies,” for example, “in support for kids in the schools who feel challenged because of their sexuality and often end up feeling alone and suicidal, for kids who end up being homeless or ignored or sent away by families and friends, and for healthcare for everybody, including people living with HIV and AIDS.”

For her part, Malia said, “There are a lot of interesting people running, but nobody comes close to the experience that Steve Grossman has, and we really need that.”

One piece of unfinished business, she said, is adding public accommodations to the Transgender Equal Rights Law.

“Strong [progressive] leadership coming from someone like Steve would make a difference,” said Malia. “That’s another reason not to see Charlie Baker win. There is enough of the Tea Party ilk in the House to cause a lot of trouble, making speeches” that would “not be nice.”

While organizers of Grossman’s LGBT event declined to say how much money they raised, Rosendorf said, “It exceeded expectations.”

The Democratic Party state convention is scheduled for June 13-14 in Worcester. The Democratic and Republican primaries in Massachusetts will be held Tuesday, September 9. For more information on the campaign, visit www.stevegrossman.com.