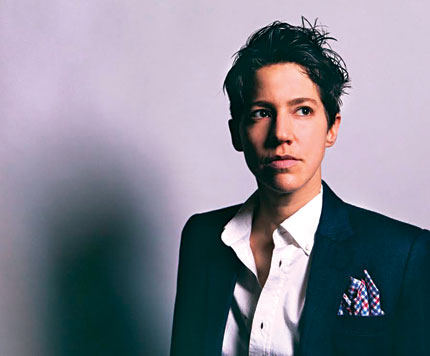 Musician and actor So Brown
Photo: So Brown

Musician and actor So Brown
Photo: So Brown

BOSTON, Mass.—Every November, the transgender community focuses on the family, friends and loved ones they have lost to violence and prejudice. The Allston, MA vigil for slain transsexual Rita Hester in 1998, inspired this tradition.

The day has special and different meaning to many.

“This is our concerted effort to raise the visibility of trans people who have for too long been victimized by our culture,” said Chair Emeritus of Massachusetts Transgender Political Coalition, Nancy Nangeroni. “Trans women of color, especially, but also including everyone who has suffered violence or discrimination, as well as those who have taken their own lives to end the suffering, or perished due to the impoverishment imposed on those who dare to defy society’s gender conventions.”

Nangeroni led the candlelight vigil for Rita Hester in November of 1998 that inspired Gwendolyn Smith to call for an annual TDOR observance.

For others, TDOR is a time of reflection.

“For me, it’s a time to reflect on the unique challenges faced by the transgender members of our community: violence, but discrimination, family rejection, homelessness and underemployment,” said GLAD’s Executive Director Janson Wu. “It is also a time to rededicate ourselves to fighting for fair treatment of transgender people.”

For Elizabeth Wintheiser, retired nurse, the day hits close to home due to her line of work.

“This day is important to all trans people and myself in particular as a nurse who has cared for my sisters who have been subject to the violence, hatred, insults and discrimination, which each of us faces, simply because our sense of self does not comply with the standards set forth for by others for us to comply with,” she said.

Mobile software engineer, Holly Schilling, said this year she is going to think of those who have taken their lives because of the stigma of being trans.

“Recently, there have been several suicides, including those of Leelah Alcorn and Ashley Hallstrom, where being trans is cited as a direct cause, but the stigma attached to being trans still makes it a shameful secret that many would rather take to their grave than reveal,” Schilling said. “The truth is we don’t know how many suicides each year are transgender related, and we probably never will.”

Schilling has lost people in her own life due to suicide.

“This year holds particular meaning to me because I knew Ashley Hallstrom (or rather her Reddit name of /u/LittleColette) and I take her loss as a personal failure,” she said. “We started talking one day when we were both having bad days as a way to cheer each other up. Now, I constantly question if I could have done more to prevent her death. ‘If only I had talked with her that day… If I had said something more meaningful in our last conversation…’ There is a long list of Ifs that will never get answered satisfactorily.” [pullquote]“For me, it’s a time to reflect on the unique challenges faced by the transgender members of our community: violence, but discrimination, family rejection, homelessness and underemployment,” said GLAD’s Executive Director Janson Wu.[/pullquote]

Schilling said it is important to remember those who are gone.

“Despite the abundance of suicides and murders, most often the latest victim becomes a hashtag trend on Twitter and quickly fades away,” she said. “If we ever hope to actually make a difference, these deaths need to be more than a fad. On this day, we take the time to remember those that have been lost and by doing so we can hopefully prevent more names from being added to that list.”

Musician So Brown agreed with Schilling.

“Every day of life is a day to celebrate, and I have to believe that those who have gone before us would want us to live and be bold and be fabulous, so that life can be inspiring for those living it,” they said.

“Transgender Day of Remembrance draws the attention of our community and the general public to the value of transgender lives—that each person we have lost is irreplaceable, and that their loss is unacceptable,” Wu said.

While there are no official databases, more than 20 trans people are believed to have been murdered this year alone.

“Our sisters and brothers are being murdered daily. One report I have seen stated that 29 trans women are killed worldwide each day simply because of their gender presentation and many are women of color,” she said.

The fact that there is no database angers Wintheiser.

“Often the numbers are underestimated because officials misgender the victims for whatever reason. There is no federal, state, or local database to record the murders of trans people. This kind of database has been proposed and is being discussed at a Federal level in part because of events like TDOR,” she said.

“These deaths will stop only when society accepts marginalized individuals as valued members of our society and community. In several states it remains an accepted defense for murder that a male panics upon finding this woman he just had sex with has a penis. Events such as TDOR are important to put before the public the reality that transgender people exist and live among them peaceably while contributing to the community. And we are not leaving,” Wintheiser said.

Transgender Day of Remembrance takes place on November 20th. Check out the full list of events at www.transgenderdor.org. If your event is not listed, please submit it transgenderdor@gmail.com. For more information, please visit www.masstpc.org. For an unofficial list of the transgender people who have lost their lives in 2015 alone, please click here.