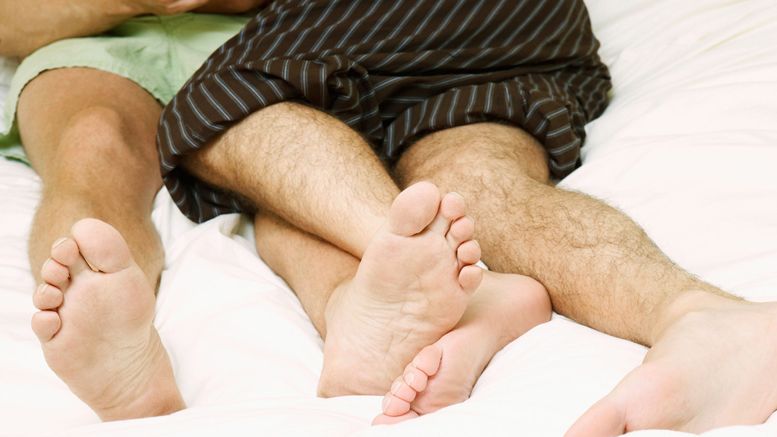 Laughing in Bed, scientifically proved to be good for your health

While sleeping is good for the body, so is laughing with your partner in bed

This may sound odd to you, but I love laughing during sex. No, I’m not laughing at my partner (well, maybe sometimes I am), but rather, we’re usually laughing together. Maybe we missed each other’s mouths while kissing in the dark, or perhaps a hand went someplace unexpected (but probably welcomed). I enjoy laughing in bed because I don’t take sex seriously. Sex should be fun and exciting and it should feel good – and as it turns out, laughing can contribute to all those things that make doing the deed so great. In fact, it’s quite common – and healthy. Here are a few educated reasons why.

If you and your partner are laughing in the midst of the bump-and-grind, you’ve reached the ultimate relationship goal – in my opinion, at least – of being totally comfortable while you’re naked together. I don’t enjoy being guarded when I’m otherwise completely exposed, and I want my partner to be relaxed as possible too.

It stands to reason then, as a result of your superior senses of humor, a greater sense of security is established in the relationship – a positive byproduct of giggling at each other’s real-time sexual misfortune – according to licensed marriage and family therapist Lori Schade.

“When a couple can be playful and laugh together and it is accepted, the relationship feels safer, and then they feel safer to explore various options in their sexual relationship,” she says.

Which is just one more reason for your wall-to-wall neighbors to be envious.

2. It relieves the pressure to ‘perform’

We’ve all had those nights – thank you, Thirsty Thursdays – when we’re not in the right frame of mind when it’s time to show that bar trick what’s good. That’s because we’re so concentrated on performing well – and striving for climax – that the anxiety we’ve caused ourselves overshadows the carefree romp we should be having.

“When couples get fixated on goal-oriented behavior in bed (i.e. orgasm), it often generates pressure and anxiety, which are counter to performance,” Schade reveals. “When they instead are just experiencing each other in the moment and can laugh together, they are more likely to increase the quality of the sexual interaction.”

The takeaway? Let out a few belly laughs in bed to blow a better load.

3. Laughing helps you relax your muscles for a more pleasurable tryst

Sex feels great – or at least it should – but there are exercises we can do before getting down to the nitty-gritty that can heighten the experience for even more pleasure. You won’t break a sweat, either – because all you need is a robust chuckle.

4. Mutual laughter between partners means you’re both in touch with the dynamics of your relationship

Any couple who have been together for a length of time, let’s say two years or more, knows that sex can become routine, commonplace and, dare I say it, boring – because, as Schade admits, “Sexual experiences and relationships wax and wane.”

Hope is not lost, however.

The first thing you need to know is that it’s totally normal; every relationship deals with this at some point. Secondly, being able to laugh about it to keep the affection running steady when the physical aspect of your sexual relationship experiences hills and valleys is a sign that you’re in a good place.

“Laughing implies acceptance of a variety of levels of desire and performance,” Schade adds.

Your relationship may not be perfect, but your ability to laugh with each other suggests that there’s a level of openness and honesty that many other couples lack. Hold tight on that revelation when things get wonky down there and you’ll be A-OK.

Do You Have A Transgender Valentine? Are They Are Worthy Of Being Your Partner?

LGBTQ Couples’ Fears of PDAs: It’s All About Time For Love Boston