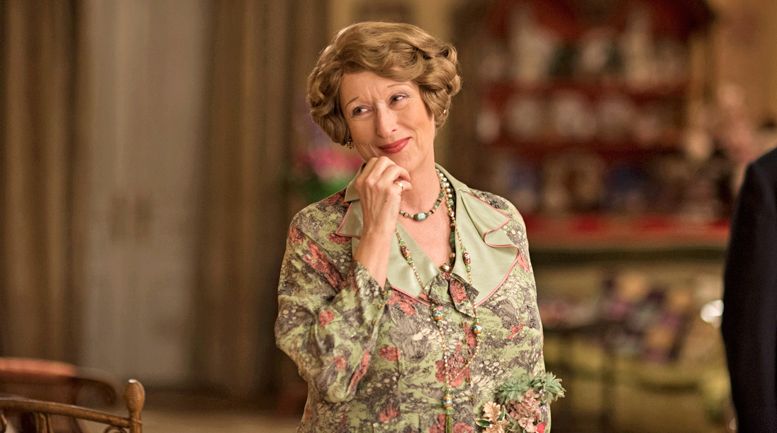 Acting luminary, Meryl Streep, opens up about being ‘in love with gay people,’ the Snapchat conundrum and her beloved LGBT roles

Meryl Streep is laughing her signature laugh. You know it: Sometimes light and airy, sometimes a surge of boisterous euphoria that carries well into the next question – but always unmistakably Meryl.

Cinema’s grand dame cracks one of her warm, famous chortles during our recent interview, while entertaining the idea that her latest chameleonic role, as real-life opera diva Florence Foster Jenkins in the movie of the same name, could once again spur drag queens to emulate another one of her queer-loved characters. Then she laughs again as she fondly remembers locking lips with Allison Janney in 2002’s The Hours. Meanwhile, the mere mention of 1992’s Death Becomes Her has Meryl unleashing a hearty roar. Another laugh, too, when she ponders how sexting and Snapchat are related.

Gay audiences know this laugh because they know Meryl Streep. They also know her compassion for LGBT issues, both as an extension of her queer-inclusive acting repertoire and more explicitly, when, during her Golden Globe acceptance speech in 2004, she slammed then-president George W. Bush by condemning his anti-gay marriage stance. They’ve learned the art of shade from her sharp, searing tongue in The Devil Wears Prada, and they live for all the campy one-liners in Death Becomes Her. And during Angels in America, HBO’s 2003 watershed miniseries about the AIDS crisis, they wept.

Now, Streep, 67, sheds her skin once again to portray Jenkins, one of the worst singers in the world. In the poignant dramedy Florence Foster Jenkins from Stephen Frears, director of The Queen, the esteemed once-in-a-lifetime luminary plays a wannabe opera singer with a voice so hysterically appalling her loyal husband (Hugh Grant) bribes critics into letting her think she can sing.

Here, during this rare and revealing one-on-one conversation with Streep, the three-time Academy Award winner and record holder for most Oscar nominations discusses why she regards Angels in America as one of the most important LGBT-themed films she’s done and how she feels about gay men performing Meryl monologues. And looking ahead, is the biopic queen ready to consider her own story becoming a feature-length film in the future? Streep laughs at the very thought, of course, but she’s not kidding when she says, “I hope I fade into oblivion.”

Q: You’ve given the gay community a breadth of greatness over the last four decades. When you look back at your gay roles, which has been the most important to you?

A: Oh, gosh. To me, I mean, Angels is such an important piece of history, and I felt really lucky to be part of that because I don’t think there was anything like it before. It really felt like being at the Democratic National Convention in the moment that Hillary shattered the glass ceiling – a big deal. The Hours was important too. And of course I got to kiss Allison Janney, which was a perk! (Laughs)

Q: Don’t tell Emma Thompson, who famously tongue-kissed you and gave you an orgasm in Angels.

A: (Laughs) Yeah, right! (The Hours) was nothing like that!

Q: I remember Emma talking about that kiss in an interview with The Hollywood Reporter. She’s very proud of it. She said she learned that “you have to use tongues even if you’re not a lesbian.”

Q: When you look back at that moment, how does your takeaway from that kissing scene compare to Emma’s?

A: It’s just, you can’t take the baby from the bathwater. You can’t. It’s just the whole thing of it – that (orgasm scene) was just like the culmination of it. But what (screenwriter Tony Kushner) was doing was for a really mainstream HBO audience at that point – just groundbreaking. That hadn’t been on television. Movies, yes. But not television. So it was very cool.

Q: You discovered you were a gay icon in 2012, when you found out about Streep Tease – gay men taking on Meryl monologues in West Hollywood. Did you ever get a chance to see it?

A: I didn’t. We went immediately to London to shoot something else.

Q: How do you feel about watching other people – gay men, for instance – do Meryl?

A: I love it when they do other people! (Laughs) I don’t know. I’m sure it would tickle me, but I’m just not – I don’t have a distance on myself yet that I probably should have. It’s like when my kids imitate me. I laugh but I kind of don’t like it. (Laughs)

Q: Do they imitate you often? 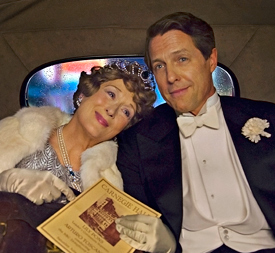 A: Oh my god, yes. Endlessly. Especially when I answer the phone and they can tell that it’s (me pretending to be), like, a Jamaican operator or something, because I sort of start talking in the accent of the person I’m talking to. Oh, they’re merciless.

Q: Do you feel a connection to the LGBT community?

A: I just can’t remember when LGBT people were not in my life. You know, gosh. My piano teachers when I was 11 and 12 were two gay men in a little town in New Jersey who had a collection of Mexican art and piñatas and silver lantern covers, and their house was wonderful, not like anybody else’s house in Berkeley Heights, New Jersey. And yeah, I came of age when everything was kind of opening up and that’s a good time, right like now.

This film harkens back to the ’40s when communities were kind of cloaked and undercover, and yet in Greenwich Village and just communities of people in the artistic world, they were always embracing of people, every kind. That freedom – very staid people were drawn to that world because of its imagination and exoticism and willingness to embrace life in a different way.

Q: How do you think the message of Florence – doing something you love because you love it and not because of what other people think – will resonate with the LGBT community?

A: Well, to the extent that anybody tells you that you can’t be a certain way or you shouldn’t be a certain way. You know, I think the limits other people put on you are the least valuable. A child announces who they are and people who encourage them are the ones to be around… and you have to get rid of everybody else who doesn’t help! (Laughs) I feel that way about everything, but certainly LGBT audiences will understand that.

Q: In 1979, when you played a lesbian in Manhattan, being LGBT wasn’t cool. Why did you take on a role that might’ve been deemed “too much” during that time period?

A: I didn’t think of it that way. I mean, I was coming to movies sort of sideways from the theater. I got an early movie and I thought, “Well, this is a one-off; they’ll never ask me again.” I was fine with that. I was happy in the theater. And in the theater I had lots of gay friends and my longtime collaborator Roy Helland is gay. I’ve grown up with gay people and been in love with gay people.

Q: I mean, I know women who’ve had gay boyfriends and gay husbands.

Q: If you were to play another lesbian role, who would be your dream co-star?

Q: But who? I mean, you and Sandra Bullock have already had practice making out at the 2010 Critics Choice Movie Awards.

A: Yeah! That was famous. But I don’t know! I can’t pick! There are so many. One thing I think is, there are so many young talented actresses and actors. I grew up in a time when people emerged – like, there were a handful of people. Now, there’s like 35, 40 people who are just beyond talented, and because of the opening up of long-form television and all the other platforms – webisodes and things like that – I think there are more opportunities for people to demonstrate their talent. There are so many talented people.

Q: And streaming – I heard you say you’re learning about it.

A: Getting on that, yes. Not really. (Laughs) Somebody told me that I Snapchatted but I don’t know how to Snapchat and I thought it was the thing that you do when you’re sexting sort of and then you want it to be erased. I didn’t know what they were talking about!

Q: It’s very confusing out there, Meryl. Stay in your bubble.

A: In theory. But the heart sinks until you read the script. It’s like, somebody said (they want a) Mamma Mia 2! and it just – ack! I thought, Gram-Mamma Mia!? Really? No. (Laughs) So it would depend on the script; the script is everything. If somebody has the imagination and wit to apply and has an interesting story, yeah, sure. But absent that, no.

Q: Your gay fans wouldn’t mind, I’ll tell you that – as long there’s a solid script, of course.

A: No, I wouldn’t mind either if the script were good.

A: I knew when I met the writer! (Laughs) When I met Martin (Donovan), I thought, “OK, here we go.” And then (when I sang) my first number, I thought, “Oh, all right, I’ll see this in a club somewhere.” I mean, with lines like, “Now a warning?!” – I mean, come on! It was so much fun, and it’s sort of a documentary on aging in Los Angeles now, it seems to me.

Q: For years you’ve been playing real-life people: Julia Child, Margaret Thatcher, now Florence Foster Jenkins. If one day there’s a Meryl Streep biopic, what do you hope it captures about your life and career?

A: I hope that doesn’t happen! You know, I treasure my life and the fact that it’s not on Facebook, and I really love my solitude and privacy – all these old-fashioned concepts. In a job where I’m with hundreds of people all the time and going on these press things, I just really love to get away and not be in the chattering world. That’s really important to me. So, I hope I fade into oblivion.

We rode in from the airport and Roy – my hair and makeup guy – pointed out the Will Rogers museum here in LA that’s closing and I said, “Why?” He said because nobody knows who he was and nobody cares, and there was no more central figure in his time that could sort of translate the best of the wit and charm of his era. So, you know, then it’s over. He’s gone. Nobody cares.

Q: And you’re OK with that happening to you?

A: Yeah, I’m fine with that! (Laughs) I seriously feel like you can only speak to your moment, and right now your work should reflect it. Your work has to just be important right now. And in 10 years if it looks obsolete or like you were overdoing it, that’s fine, because for that time you were.

Chris Azzopardi is the editor of Q Syndicate, the international LGBT wire service. He can proudly say Mariah Carey once called him a “daaahhhling.” Reach him via his website at www.chris-azzopardi.com and on Twitter (@chrisazzopardi).