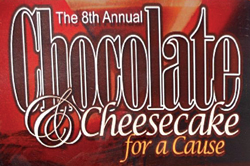 True Colors successfully held their 8th annual “Chocolate & Cheesecake for a Cause” benefit gala at Anthony’s Ocean View in New Haven, CT. The event was the organization’s yearly major fundraiser, usually raising around $20,000. All proceeds support True Colors’ efforts to fulfill their mission statement of ensuring that needs of sexual and gender minority youth are recognized and met.

According to Executive Director Robin McHaelen, “our three primary values at True Colors are respect, safety and inclusion. One of the ways in which we ‘live’ the value of inclusion is to create fund-raising events at various price points so that everybody can participate.” McHaelen went on to say, “we make less than other fundraiser events do in the community, but we reach a diverse audience that might not otherwise be able to participate.”

The evening began with a welcome from host and comedienne Christine O’Leary, also a Board Member and longtime volunteer of True Colors, who sold rolls of raffle tickets while bantering with audience members, playing on their generosity while still being silly. “Giving money to True Colors is absolutely the most important thing; it’s more important than a jello shot or a Starbucks coffee,” said O’Leary.

Board President Marlo McGriff said a few words of thanks to those in attendance (around 250), as well as to the many volunteers that contribute their time and energy in supporting True Colors. Last year alone, volunteers donated 13,650 hours of their time, McHaelen announced.

O’Leary concluded the speeches for the evening by thanking everyone for supporting an organization that sticks around for everyone. O’Leary equated this with a story about a child who had said to her, “thank you for saying hello 32 times, because the 33rd time, I knew I was a human being.” True Colors focuses on inclusion, and O’Leary promotes this with her comedic skills. “Coming out is so high risk, you could lose anything and everything. If I can make that easier for anybody, that is what’s most important.”

McHaelen spoke about these inclusive programs that True Colors holds throughout the year that are so important to LGBTQ youth. She stated that even if money raised is to fund something as small as pizza for a youth support group, there are instances when that pizza is the only meal someone will eat that day. In other words, money raised from one raffle item not only provides pizza, but a dinner with people who love and care, something that these children may be missing. O’Leary put it best when she said, “if you support True Colors, you are supporting an organization that sticks around for the kid you don’t know, when no one else did.”

Money raised from these fundraising dollars, including the night’s auctions and raffles, supports activities that are not funded by grants or fee-based services, said McHaelen, “programs like our new transgender youth support group; the production of our annual resource guide; training for schools and agencies who do not have the budget to pay for it, as well as our clearing house resource center that answers more than 3,000 calls a year from folks looking for support.” Auctions included a $550 bid for a five course meal prepared and served for six people, complete with cheesecakes by Gourmet Goddess, who also supplied the event’s cheesecakes and truffles.

Entertainment was provided by members of the Imperial Sovereign Court of All Connecticut, which donates proceeds of fundraising events directly to True Colors. The gala concluded with dancing and music provided by Colin “DJ DEEM” Smith.

The evening was sponsored by Yale University and Bank of America.