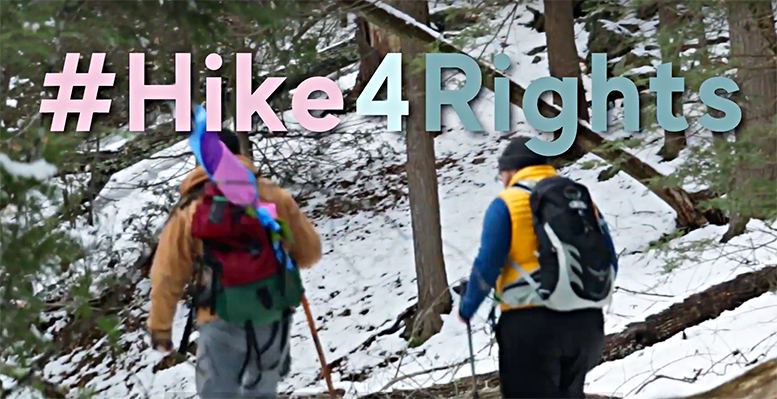 Beginning August 15th, Ev Evnen (pronouns: they/them/theirs) of the MaeBright Group LLC, and Mason Dunn (pronouns: he/him/his) of the Massachusetts Transgender Political Coalition, will hike across Massachusetts, from Connecticut to Vermont along the Appalachian Trail, to raise awareness for the vote on transgender rights, which will be on the November ballot.

“These parks and trails are an important public accommodation,” explains Dunn. “We hope voters will defend and protect our rights as trans people to access these spaces on the November ballot.”

“We know transgender people face widespread bias, discrimination, and even violence,” said Evnen. “This is particularly true for transgender women, and more specifically transgender women of color, who face almost three-quarters of the hate crimes committed against the LGBTQ+ community nationally.”

Massachusetts will be the first state to vote on transgender rights in the country. Advocates, including Evnen and Dunn, are working to make sure public accommodations protections remain the law. The #Hike4Rights project, hosted by the Massachusetts Transgender Political Coalition, MaeBright Group LLC, and the Venture Out Project, is intended to raise awareness for the law and the upcoming vote in November.

“We hope community members and supporters will join us for a day hike, celebration, and flag raising on August 25th at the summit of Mt. Greylock,” continued Dunn. “It will be a reminder to our community that from the highest peaks to the lowest valleys, transgender people are a part of Massachusetts.”

More information is available at www.Hike4Rights.org. For more one-on-one information about the hikers and the trail, click here.