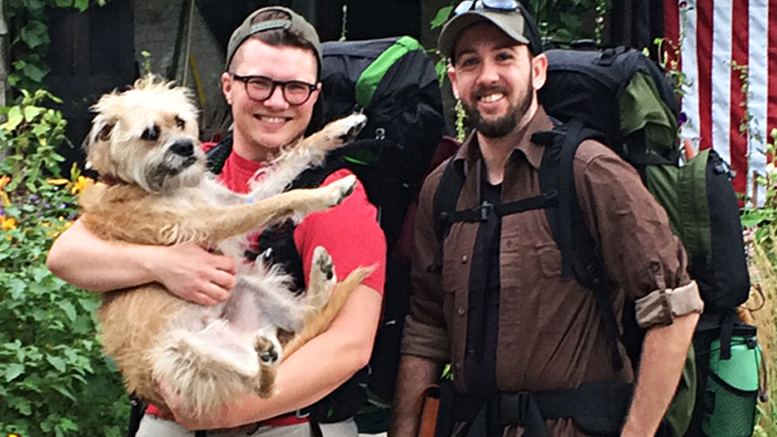 #Hike4Rights Initiative, A Forum to Advocate for Trans Rights

On August 15, trans activists Mason Dunn, executive director of the Massachusetts Transgender Political Coalition (MTPC), and Ev Evnen, director of MaeBright Group, LLC, will be hiking to the highest peak in Massachusetts, Mt. Greylock, to raise awareness for the November vote on transgender rights that could strip away the existing protections of transgender people in Massachusetts. Dunn and Evnen have dubbed the action “#Hike4Rights”.

The advocates will hike across Massachusetts, from Connecticut to Vermont along the Appalachian Trail. The effort coincides with an initiative started in May by Freedom for All Massachusetts coalition, which is working to affirm Question 3 on the ballot initiative. Question 3 will ask voters whether to maintain or remove nondiscrimination protections for transgender people in public places like parks, libraries, and hospitals. A “yes” vote on Question 3 will maintain the existing protections for transgender people in the commonwealth, ensuring that members of the trans community can access spaces, free from discrimination or harassment.

Republican Governor Charlie Baker signed the bill into law in 2016 extending commonsense, non-discrimination protections to transgender people and visitors to the state. Although the Bay State law already prohibited discrimination against transgender people in housing and employment, the new 2016 law extended these same crucial protections to public accommodations, such as access to restaurants and malls, among others.

The Rainbow Times discussed #Hike4Rights with the pair to get the details of the initiative.

The Rainbow Times: How exactly did this hike come about?

Mason Dunn [Pronouns: He/Him/His]: Ev and I have been backpacking together now for a couple years, and we’ve also been doing trans advocacy for a couple years as colleagues, with myself at MTPC and Ev at MaeBright. It kind of came about naturally, thinking about the [transgender public accommodations] bill, and then moving into this ballot initiative work. We really wanted to do something that would merge our passions for the outdoors and public accommodations and trans advocacy.

Q: Why is #Hike4Rights important to you?

MD: I echo that. The woods, the outdoors, are all safe places for me, and they were when I was a child, growing up in a world where I was not seen as my authentic self. The only place I felt authentic was in the outdoors. And as a white masculine trans person as well, this is a space I was lucky to have access to in my youth … people don’t always have that same opportunity, so I recognize the privilege [in that].

Q: How specifically will this ballot affect the transgender community, legally?

MD: I’ll jump in as the lawyer here. This ballot initiative … was initiated by the opposition to transgender rights, and they want to roll back the protections we won through the [state] Legislature in 2016. If we lose those rights and accommodations, it means that we have no legal recourse, should we experience discrimination in [public] places.

So, right now, if a trans person were to experience discrimination in a grocery store, for instance, that person would be able to go to the Attorney General, the Massachusetts Coalition Against Discrimination, or a private attorney, and hold that grocery store accountable for that discrimination. Without the legal protections, that accountability does not exist.

EE: I think one of the legal aspects that is so important for me is thinking about the federal landscape and how trans-hostile [it] is right now; as the [Commonwealth] of Massachusetts, we have the opportunity to say, “not in our state,” and that in our state we’re going to continue to respect and honor trans people as people who should have access to public spaces.

Q: How will this ballot question impact trans people socially?

MD: I think it sends a very clear message if the voters turn down the transgender rights ballot. It not only sends the message here but nationally, that we aren’t welcome in our own home. That will be disastrous on the state and national level. That being said, [if] we win this ballot … it will show for Massachusetts that we are members of this community, we are valued, [and that] we are people who deserve just as much protection in public spaces as anyone else.

MD: It is. I think there’s something to be said [about] “being on the top of Massachusetts.” And a group of trans folks, our friends and loved ones coming together to say “this is our state,” from the tallest peak down to the lowest valley, and everywhere in between. “This is our home, and we deserve rights.”

Q: What’s your itinerary for the hike?

MD: … It’ll likely be 15 or 16 days out on the trail. We’re looking for folks to help us out along the trail by hosting us for a night so we can get out from the outdoors and enjoy a shower or something along those lines.

The Mt. Greylock meetup will be one of hopefully a couple of other meetups where folks can meet us for a day hike. There will be opportunities to engage with us along the trail and to have conversations. While people won’t be joining us overnight for liability and safety reasons, there will be many opportunities to be with us in spirit, online, or in person.

EE: We’ll have a blog as well.

MD: If we get sponsorships for GoPro cameras or something along those lines, [we’ll] do a video or a photo blog that we can update … when we get to places with Wi-Fi.

Q: What specifically do you hope to show with this hike?

MD: The other thing I will point out is that there’s a lot of misconception around what “public accommodations” means, thanks to the opposition spreading myths and lies about what the law actually says. The parks, the trails, the shelters, along with places like grocery stores and libraries, theaters, all of those are public accommodations. That’s what’s at stake here: our access to and our ability to enjoy all of those places that make Massachusetts our home.

Q: Do you have any words of encouragement to local and national leaders who are facing similar battles with regards to trans rights?

MD: We’re in a unique situation here [in Massachusetts] because there are so few signatures required to put a law on [the] ballot. My hope is we don’t see any other ballot initiatives, but I know that the opposition is looking for any opportunity to strike down our rights and our dignity through these types of … initiatives. For other states [where there is] a possibility of seeing this, it’s about bringing the community together, it’s about celebrating our victories, and, in the end, working for and by the community at all times.

*This story was updated with recent information from a press release by the advocates.

[Originally run on May 30, 2018, exclusively for the New England Pride Guide 2018, produced entirely by The Rainbow Times.]