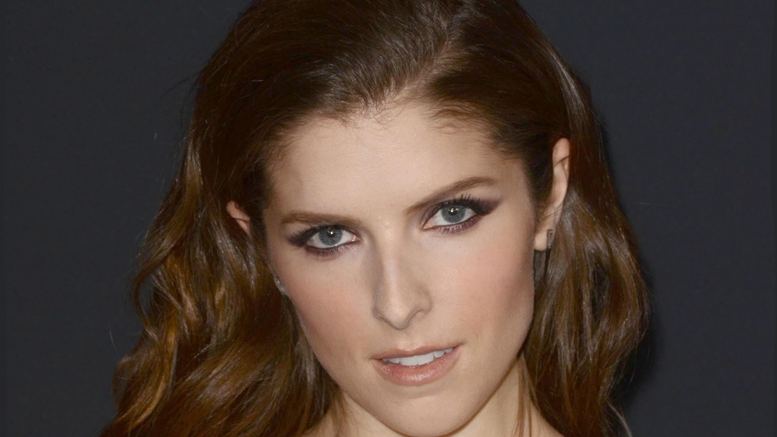 The pitch is perfectly crazy in Anna Kendrick’s walk on the dark side of filmmaker Paul Feig’s warped sense of humor, A Simple Favor. It’s martini-sipper mom versus martini-swigger mom. Target mom versus Met Gala mom. Aspirational versus extra.

A bit camp? Yep. A bit queer? Obviously. And naturally so, as Kendrick’s 15-year career is steeped in queerness: at age 17, she cut her acting teeth on Camp, the 2003 teen musical-comedy directed by out filmmaker Todd Graff; as Beca, she brought covert aca-gayness to the three-part Pitch Perfect franchise; and in 2014, the 33-year-old Oscar-nominated actress slipped into Cinderella’s glass slippers for Stephen Sondheim’s Into the Woods. And her long, impulsive kiss—“just another Tuesday,” Emily notes—with Lively in A Simple Favor, well, it’s not exactly straight, she says.

Here, the longtime ally talks about attempting to allow the lesbian love to bloom between queer-coded Pitch Perfect leads Beca and Chloe (Brittany Snow), what irks her about self-congratulatory reactions to celebs coming out and, when it comes to her own sexuality, being open like Emily.

Azzopardi: A car sing-along, a little camp, some martinis and a mom makeout sesh: Anna, you sure know what the gay community wants at this point in your career, don’t you?

Anna Kendrick: (Laughs) Oh my gosh! I wasn’t thinking of it in that way, but yeah, it is kind of camp. It takes itself a little seriously, but we’re always winking or having fun. It’s bright and colorful, and there’s an unabashed campiness to it—even though the stakes are very real in places.

Q: You didn’t recognize a queer sensibility going in?

A: To be honest, when I was going in, there was just so much to play with. I remember having one of those conversations with Blake where we both felt like, “Are we high right now? Are we having a stoner conversation?” Because we were talking about how in a traditional comedy there’s a slider that you’re on from how subtle to how broad, and with this, it felt like you weren’t just on this linear slider—you were in three dimensions, and you could go to all these places.

It was so much fun as actors to have that, and I know that sounds really stoner-y and existential and dumb. But the world Paul created had so much possibility, and so I wasn’t really thinking about one group. I was barely getting my brain around what the movie was in the first place! But I think Stephanie is very much an underdog and she’s finding her place in the world. I feel like that’s something that queer people can relate to at one point in their lives or another.

Q: What was it like coming to set for the first time and seeing the giant painting of Blake-as-Emily’s vagina front and center in Emily’s front room?

A: OK, this is actually really interesting: So that painting – fun fact – was never once on set. That is all post effects. Sometimes it was green screen, and sometimes it was this other painting that was very nice but very Tumblr art. It was actually Blake’s idea to have it be a little bit more, um, obscene. Certainly, it’s art, but a little more shocking for Stephanie to see. Not so polished, not so pretty, not so coy. I thought that was really brilliant.

Q: Regarding Pitch Perfect: Are we ever gonna get the Beca and Chloe love story that they so deserve?

A: I know. I definitely wanted to have an ending that was a Bechloe ending, and we did shoot one version where Brittany and I tricked everybody into just shooting one that was just the two of us getting together. We knew it was a long shot. It meant so much to us that there was this following around their latent relationship and, yeah, I thought it would’ve been really cool if it would have ended up coming to fruition in the end. If we ever do a four, I will fight tooth and nail for it, but I’m not sure it’s gonna happen.

Q: Because the studio doesn’t want to go there with their sexuality?

A: It wasn’t like Universal was like, “There can be no lesbians in Pitch Perfect!” Because obviously, Cynthia Rose is an openly gay character. But I think they were just confused by it because they weren’t listening to all the online chatter about it, whereas I see it every day, and I’m like, “Are you kidding? This is what they want!”

A: OK, I’ve actually only tried to ever read one. It was so sweet and puppy-lovey that I was like, “Aww, I wanted to read some sauciness!” I thought I was gonna get scandalized! Instead, I was like, “Aww! This is, like, so sweet! This reminds me of The Baby-Sitters Club books.” But I haven’t actually followed up on it.

Q: You once met a guy at a Gelson’s market who told you he does your Camp character, Fritzi, in drag. First of all, how often do you run into drag queens at grocery stores who tell you that you’re their inspiration?

A: (Laughs) Not often enough! That was one of my favorite moments of being recognized, ever. And I’m sorry, what’s the second part of your question? I got too excited.

Q: Which other characters of yours might make good drag material?

A: Stephanie has a real Sandy-in-Grease vibe, where she doesn’t become the bad girl, exactly, but she loosens up and shakes it off a little bit. But I do always still like Rizzo in Grease, who is more fun than Sandy, so I’m not sure that Stephanie is necessarily the one. She’d have to really just be letting her hair down.

A: The thing that made me uncomfortable about Fritzi was I was 16, but it wasn’t so much that she was gay – it was that unrequited gay love situation. I think if she’d been crushing it and getting girls, I would’ve been like, “Awesome, awesome, awesome!” It was just, at 16 you don’t want to be playing the girl that nobody likes, which I totally recognize as I get older is such a silly insecurity issue. But at the time I was definitely like, “Can’t somebody just have a crush on me in a movie— god!”

Q: Would you have approached Fritzi differently in retrospect?

A: The truth is, I think would have just enjoyed myself. Todd Graff is amazing, and I’m so lucky to have had him as my first film director. And he really got me to do everything that I think that I would’ve done as a more experienced actor, regardless, but I guess I regret that I didn’t enjoy myself more.

Q: You recently won the Choice Twit award at this year’s Teen Choice Awards, and I wouldn’t be surprised if this was your crowning tweet: “Lot of people seem really proud of themselves for announcing they ‘already knew’ Barry Manilow was gay. Yeah……ur the true heroes today guys.”

A: When a public figure comes out, taking the attitude of like, “Duh, we knew,” is the weirdest thing to me. Even when celebrities announce that they’re pregnant, people aren’t like, “Duh, we could tell three months ago.” They’re like, “Aww, she’s finally ready to talk about the fact that she’s pregnant! That’s amazing!”

And you would think that your sexuality would just be really supported (because) they feel comfortable talking about it now. It’s a really weird topic to feel a sense of superiority that you figured it out first.

Q: So much of what you do is just a bit gay. Was that the case for your role as Santa Claus’s daughter in the forthcoming Noelle?

A: Again, I would say Noelle has a touch of camp, so hopefully that will be enjoyable. It’s been so long and I haven’t even seen a cut of it, so I’m like, “What did we make?” Oh, but they did make a point to have same-sex couples wherever we went, whether we were at the North Pole or outside the North Pole.

Q: Getting back to A Simple Favor: Where do you think Stephanie and Emily fall on the Kinsey Scale?

A: That’s a good question. I think Emily is a surprise for Stephanie, and she is completely in love with her in a way that she can’t totally understand. I do think that Stephanie probably would define herself as straight, except that there is this woman and she really is kind of in love with her and there is a part of her that is attracted to her.

That scene: I remember Blake and I both feeling like neither of us wanted to be the aggressor in the scene. Blake was worried that she would come off as taking advantage of me in that scene because I’m in a very vulnerable place, and I was worried that I would come off like I wanted so much more, and that Blake is just kind of playing and Emily is very comfortable with the fluid aspects of her sexuality, whereas Stephanie has more of an emotional component to it. So, I was worried it would be, like, really sad. We definitely struggled to find that perfect balance of, there’s just this moment and they both get caught up in it and it’s a little uncomfortable. Yeah, it was a fun day.

Q: You’ve been open about your girl crushes over the years. Have you ever had a girl crush that was or could have been romantic?

A: Let me think about that. I definitely—there’s somebody I’m still friends with, and when we met we kissed. This was after high school, and it was the first time I had kissed a girl where it wasn’t just like, we’re at a party and boys are watching! That horrible performance silliness. But I think I haven’t had that emotional love for a lady, which isn’t saying it could never happen to me, but I think I’m more of an Emily than a Stephanie.

Q: And your lip-lock with your longtime girl crush Blake Lively in this movie—thoughts?

A: (Laughs) I mean, all I’m ever thinking about in (kissing) scenes is, who has gum? Who has a mint? And I think Blake is probably the same because I’ve never experienced a guy, like, searching for a mint and searching for gum. So, we were the mintiest, freshest two people to have ever kissed in the history of America.

A: Thank you. Call Guinness.

1 Comment on "Anna Kendrick, Fresh With A Twist, Talks “Bechloe”"