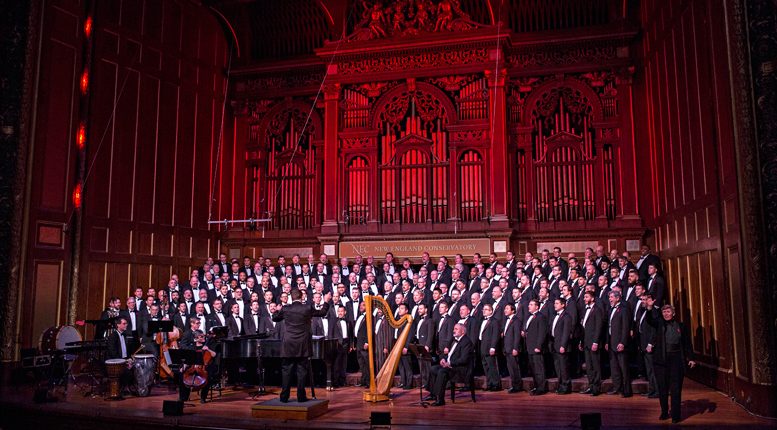 From David Bowie’s cool encouragement to “turn and face the strange” to Lady GaGa’s joyous declaration that “a different lover is not a sin,” pop music has provided a soundtrack—and a lifeline—for generations of LGBT people as they came out. Just in time for Boston Pride, Boston Gay Men’s Chorus (BGMC), along with special guest Nick Adams, presents POPular, a rollicking romp through pop music history, from Beatle mania to the phenomenon that is Adele’s “Hello.” “We’re not trying to tell any big story with this concert,” says BGMC Music Director Reuben M. Reynolds. “This is about the pleasure that springs from a catchy hook.” Read on for more of Reynolds’ take on POPular, which takes place at New England Conservatory’s Jordan Hall June 3 and 5.

Q: In terms of song choices, POPular is all over the pop charts, so to speak—

A: It is. That’s the thing. It’s like a history of pop music. There’s not as much meaning as in a lot of our shows, yet somehow these songs mean a lot to many of us. But we are not trying to tell a big story with this concert. We’re just trying to take a little journey that’s kind of reminiscent of some of our lives. It’s the summer and it’s time to have a little fun.

Q: You start with some great Hippie-era classics like the 5th Dimension’s “Aquarius/Let The Sun Shine In,” the Beatles/John Lennon tunes “Let It Be” and “Imagine” and Simon and Garfunkel’s “Bridge Over Troubled Water.” What drew you to the late Sixties-early Seventies?

A: I think of POPular as a history to a gay man’s love of pop music from the Sixties to the present time. It’s music that I identified with and I think a lot of other gay men and lesbians did as well during that time period. You can’t think of the Sixties without doing the “Age of Aquarius/Let the Sunshine In.” Most of our Sixties stuff is devoted to the Beatles. I remember going to summer camp as a child and hearing the Beatles. I don’t know why, but I was so affected by their music.

Q: It’s amazing how we emotionally connect to songs when we’re kids, and how that connection stays with us as adults.

A: Exactly. I remember “Bridge Over Troubled Water” from that same time period. It just spoke to me. We have a young soloist who is a student at Boston Conservatory who just blows the roof off Jordan Hall on that song.

Q: Naturally, you go from the Sixties right into the glam and glitter of the mid-Seventies. Can you tell us a bit about the selections from this era?

A: We move straight into Freddie Mercury and Queen’s hit “Crazy Little Thing Called Love.” And of course, we have ABBA. We do “I Have a Dream” and “Mamma Mia.” Our version of “I Have a Dream” is a gorgeous arrangement. ABBA originally did it with a Swedish children’s choir. So we worked with a quartet of singers from the BGMC and it’s absolutely sublime. Audiences will be smiling from beginning to end of that number.

A: Well, we couldn’t do a pop concert here in Boston without Barry Manilow’s “Weekend in New England,” could we? He’s one of those pop stars that has been around so long you forget how many really fantastic hits he has, and he’s one of the first pop stars that I really connected with.

Q: Tell me about the choreography for the show.

We end the first act with a couple of songs by composer Peter Allen, an Australian who was a wonderful songwriter. He came over here and married Liza Minnelli. Eight years later, he divorced her and came out. Liza’s always been doing things like that for us, I guess. He’s best known for writing “Don’t Cry Out Loud,” which was a huge hit for Melissa Manchester. We’ll do that and another of his trademark songs, “I Go To Rio.” It’s a huge song number with lots of percussion. This concert has dance and flash beyond what you could possibly imagine.

Q: Oh really? Is this where we get to talk about special guest and great Broadway talent, Nick Adams?

A: Yes, indeed. In addition to eight dancers from our chorus, we’re bringing in Nick Adams from New York. Nick is a prodigiously talented singer and dancer who’s appeared all over Broadway. He was one of the “Cagelles” in the revival of “La Cage Au Faux” in 2010. He was in the revival of “A Chorus Line” before that. And when “Priscilla, Queen of the Desert” opened on Broadway, Nick actually created the role of Felicia, one of the three drag queens driving on the bus across Australia.

Q: If ACT 1 focuses on the Sixties and Seventies, you’ll have a lot of ground to cover in the second half of the show to bring us to the present pop chart, no?

A: Don’t you worry. Act 2 opens on the Eighties and Culture Club and Boy George are just the thing. We’ll perform “Church of the Poison Mind.” I can’t even describe to you the visual theatrics that accompany this number. Let’s just say it includes a six-foot-five drag queen. I can’t wait. And one of my favorite pieces from the concert is Carly Simon’s “Let The River Run,” which is totally different than “Church of the Poison Mind.” It shows you how much was going on right then. Nick Adams shows back up for a little Madonna, “Like a Prayer.” It’s another big dance number with boys and all kinds of things.

Q: You’re also doing “What’s Up,” from one of the greatest one-hit wonder bands of the Nineties, 4 Non Blondes. Can you talk a bit about this choice?

A: 4 Non Blondes was a San Francisco band and they were all out lesbians. Linda Perry who is now a very well-known songwriter and producer, was part of the group—their singer and guitarist. “What’s Up” is just a glorious celebration to me of women in pop music, what it was like during the early Nineties to come out as a lesbian band and call yourself “4 Non Blondes.” I don’t know why, but I’ve always loved that name.

Q: It’s a great song, and I’m sorry they didn’t stick around longer. How will the most recent two decades of music be represented POPular?

A: Then the rest of the concert features more contemporary songs. You’ll get your fix of contemporary divas. You know there’s going to be some Lady Gaga. I can’t wait to see what’s going to happen when we do “Poker Face.” There’s Christina Aguilera. There’s Adele—a lot of Adele. We’re doing “Rumor Has It,” “Somebody Like You”, and “Hello.”

Q: So how does all of this end? It’s hard to top the divas.

A: It ends with One Republic’s hit “I Lived,” a song that addresses one’s hope to do all of the things one wants to do in this life. Then of course, just because it’s fun, we have Nick coming back for a nice little encore, but I’m not going to tell you about it, because I’m not supposed to talk about encores. I’m supposed to just let them happen.