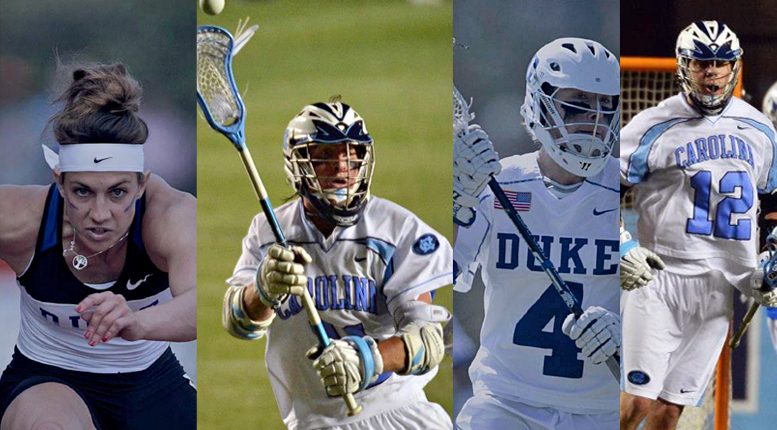 Separated by only 11 miles—and both proudly sporting the color blue—Duke University and the University of North Carolina enjoy perhaps the most intense college athletic rivalry in the country.

“Enjoy” may be the wrong word. For decades, sports events—particularly basketball—have been marked by feverish fan behavior. Signs and chants insult, mock and degrade opposing players, coaches and spectators. Some of it is funny. Some is clever. Some is rude, crude—and homophobic.

So it came as a great surprise—historic, even—when students and athletes from the two schools came together to make a video on the eve of this year’s Blue Devil-Tar Heel men’s basketball clash.

They smiled. They pumped up their own team. And they implored everyone to watch the upcoming contest in a “respectful, inclusive environment.” The idea, both sides agreed, was for people of “all identities and backgrounds” to feel safe and comfortable, while cheering their team on to victory.

“It’s the Duke Difference,” another offered.

The video was not a random act of kindness. It was created by #EveryFan. The latest project of Athlete Ally, it’s one of the most intriguing developments on the sports landscape in years.

Athlete Ally is a non-profit that provides public awareness campaigns, educational programming, and tools and resources to foster inclusive sports communities. With over 80 college chapters, and utilizing more than 150 professional athletes as supporters, the organization fights homophobia and transphobia in the sports world by focusing on the concept and importance of “allyship.”

But, says founder and director Hudson Taylor—an All-American wrestler at the University of Maryland, who famously wore a Human Rights Campaign sticker on his headgear in solidarity with the LGBT community—he and his Athlete Ally colleagues realized that while sports figures can help raise awareness of gay sports issues, fan conduct is an enormous issue too.

And one that is often overlooked.

Last year, a study reported that 83 percent of Americans believe an openly gay person would not feel safe at a sporting event.

Between homophobic chants, offensive banners and “kiss cams” that mock same-sex couples, stadiums and arenas around the world can be very hostile environments.

“These are places of public accommodation,” Taylor says firmly. “Fans who worry about what they’ll hear, what people think about the person they’re sitting with—or what restroom to use – can’t enjoy basic rights that fans everywhere don’t even think about.”

The result: #EveryFan. The campaign – involving social media, videos like the Duke-UNC one and more – will encourage positive fan behavior, for the comfort of all.

One concrete element is an #EveryFan pledge. It reads: “As a sports fan, I believe that every fan must have an equally positive experience. I pledge to treat other fans with dignity and respect. Every fan should be treated fairly and equally, inside the stadium and under the law. I support equality for every fan. It’s good for sports. And it’s the right thing to do.”

In addition, #EveryFan is working with the NCAA to amend the Code of Conduct, which is often announced before college games. It contains no specific mention or prohibition of provocative language based on sexual orientation or gender expression. An “LGBT-inclusive” code would add teeth to a somewhat vague document.

Taylor sees a role for #EveryFan at high schools too. And it’s not just to call attention to homophobic spectators. Twice in Iowa recently, basketball fans at predominantly white high schools taunted Latino teams with chants of “Trump!” and “Build the wall!”

Yet colleges and high schools are not the only focus of #EveryFan. Taylor says that although more professional teams are adding “LGBT Pride” nights to their promotional schedule, many still do not. And the ones that do limit it to once per season.

#EveryFan encourages teams to film PSAs to show on their Jumbotrons, creating a season-long dialogue around appropriate fan conduct.

#EveryFan is not the PC Police. However, Taylor notes, “there should be standards of decency. Everyone is entitled to their own beliefs and attitudes. But if their behavior negatively impacts people, we have a responsibility to speak up. Stadiums are a privilege, not a right. Athletes prepare all their lives. To honor them, it’s incumbent to treat everyone – athletes and fans – with dignity and respect.”

The Atlanta Hawks have been early #EveryFan adopters. “Their fan culture is forward-thinking,” Taylor says. After a same-sex marriage proposal during an NBA game, the team proudly tweeted it for the world to see.

The world is changing rapidly—thanks in part to #EveryFan. Don’t believe it? Just ask basketball fans at Duke and UNC.it’s the right thing to do.