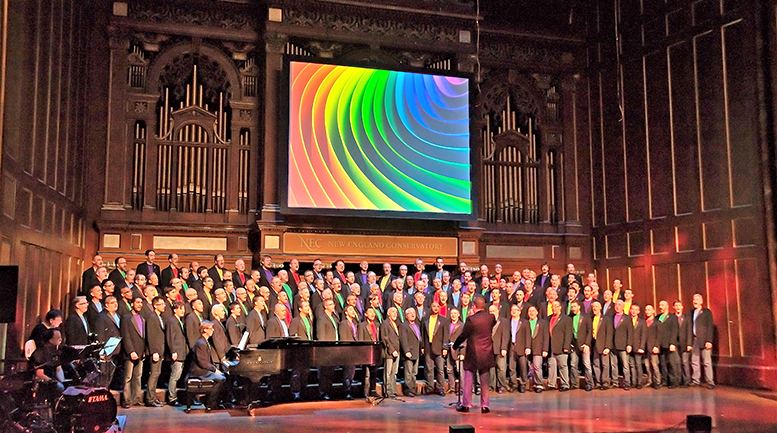 Boston Gay Men’s Chorus (BGMC) will celebrate Boston Pride Week with Together, featuring music from Broadway, movies, spirituals and pop culture. As their promo says, “Your feet will tap. Your heart will thump. Your spirit will soar.”

Q: What can we expect to hear that will get us excited for LGBT Pride?

A: Oh we have a group of songs about the gay experience. The first is openly gay composer Craig Hella Johnson’s arrangement, “I Love You/What A Wonderful World,” which expresses so much about how beautiful life can be when we find the love within each other. That leads us to “A Love That Will Never Grow Old” from the film Brokeback Mountain. And then we move to a very positive place with “I Sing Out” because it’s saying, “I sing out because I have to, this is what I believe in, I’m not here to fight with you, I’m here to sing out joy and love and tell you the story of my life.”

Q: Together opens with the anthemic “Make Them Hear You” from “Ragtime,” a musical that deals with discrimination, racial and social equality, and the immigrant experience in the US at the turn of the last century. The parallels to our current cultural and political moment are obvious. Is that why you chose this piece?

A: The short answer is yes. There’s so much in “Make Them Hear You” about standing up for your rights, about going out and fighting for those rights and to making people listen to you.

African Americans fought for civil rights and LGBT people fought for equality. And of course, we’re all still working—with more allies now, at least—to protect the progress we’ve made and to build on it. It’s such a great piece to perform for Pride.

Q: The second half opens with “Together Again” by Janet Jackson. There’s a gay connection behind that, isn’t there?

A: Absolutely. Janet Jackson originally wrote “Together Again” when she found out that a good friend was dying of cancer, but the song was later taken on as an AIDS anthem. She’s singing to someone that she has lost and it says, ‘We’ll be together again in heaven.’ It’s really glorious and moving.

Q: Together also draws on American folk songs. Can you talk about them?

A: first is “How Can I Keep From Singing,” which is basically about not being able to suppress joy, even in difficult times, because there is so much beauty and love in the world, which is a real metaphor for how LGBT people live their lives. Despite difficulty and discrimination, we always find joy. Take this sample of lyrics: “When tyrants tremble when they hear the bells of freedom ringing. When friends rejoice both far and near, how can I keep from singing?”

A: We’ll also do “Bright Morning Stars Are Rising” by Paul Siskind which explores one of the concert’s themes—that we’re not alone, we are the product of those who came before us and we’re the ones that create and nurture the people that come after us. It’s basically the story of the LGBT movement. And then we end the selection with a fantastic New Orleans jazz version of “When The Saints Go Marching In.”

Q: Jazz and protest is an interesting combination. What comes after that?

A: We’ll move into a couple of pieces by Ysaye Barnwell, one of the founders of Sweet Honey In The Rock, who has written many pieces in the African-American tradition. The first is called “Would You Harbor Me,” and it’s almost a chant. It’s very quiet, very still. The lyrics—“Would you harbor me? Would I harbor you?… Would you harbor an exile, or a refugee, a person living with AIDS? Would you harbor a Tubman, a Garrett, a Truth a fugitive or a slave?—bring us into this question of who would we have in our life, who would we take in, and pushes the limits.

Q: It sounds like this show is going to take us through all the feels.

A: Every last one of them! We end the concert with two pieces, “The Human Heart” from “Once On This Island,” which is on Broadway right now, and “This Is Me” from “The Greatest Showman,” which is pretty much the hottest song around right now.

Q: That’s a good note to end on. Is there anything else folks should know about the show?

A: The whole concert, everything in it, is uplifting to the human spirit and says to everyone, you are valid and we are all in this together, which is what Pride is all about. It has singing and soloists that will take your breath away. It’s got incredible dance numbers.