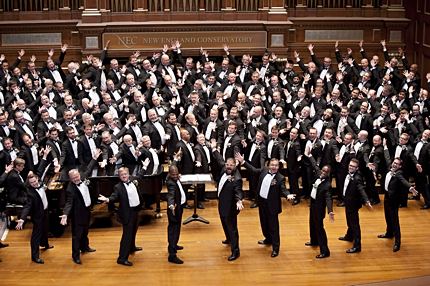 BOSTON, Mass.―In an historic performance, the Boston Gay Men’s Chorus sang at the Inaugural Celebration of Massachusetts Governor Charlie Baker at the Boston Convention Center January 8, 2015. The occasion marked the first time that a gay chorus has performed at a gubernatorial inauguration in New England.

Before the chorus performed, Governor Baker, Lieutenant Governor Kayrn Polito, and their families were led to the performance stage by the Boston Police Gaelic Column. Once they were in place, the Boston Gay Men’s Chorus performed four songs, “Holding Out for a Hero,” “We Shall Be Free,” “The Edge of Glory,” and “Firework.” [pullquote]“This was an historic opportunity to showcase our artistic talent while engaging in our service mission to change hearts and minds about LGBT people through music,” —Craig Coogan, ED, Boston Gay Men’s Chorus.[/pullquote]

The Boston Gay Men’s Chorus has a long association with the Baker family. Governor Baker’s brother Alex first performed with the Chorus in 1989 at the signing of the Commonwealth’s Gay Rights Bill. He continued to perform with the Chorus, where he met his husband, through 2003. Last June, on Father’s Day, the Baker family, including Governor Baker and his wife, Alex and his husband, and their father, attended the Boston Gay Men’s Chorus’s performance of Can’t Stop the Beat.

“This was an historic opportunity to showcase our artistic talent while engaging in our service mission to change hearts and minds about LGBT people through music,” said Craig Coogan, executive director of the Boston Gay Men’s Chorus. “We’re proud of our performance, and so pleased to have made history in performing for the new governor, members of his administration, and more than 6,000 guests at the Boston Convention and Exhibition Center.” [pullquote]The Boston Gay Men’s Chorus has a long association with the Baker family. Governor Baker’s brother Alex first performed with the Chorus in 1989 at the signing of the Commonwealth’s Gay Rights Bill.[/pullquote]

The Boston Gay Men’s Chorus is one of the largest community-based choruses in New England and has garnered numerous artistic distinctions and awards. Most recently, BGMC was selected, after a highly competitive process, to perform at the June 2015 conference of Chorus America. BGMC uses art to fulfill its mission of service which includes performing outreach concerts throughout Massachusetts in schools, houses of worship, and community centers. Proceeds raised from outreach performances are donated to local, school-based Gay Straight Alliances, and other lesbian, gay, bisexual, and transgender organizations. To date, nearly $500,000 has been raised and distributed in communities including Lynn, Acton, Springfield, Framingham, Hanover, Haverhill, Pittsfield, Salem, and Beverly.

In 2015, BGMC will embark on a tour of the Middle East, becoming the first gay chorus to perform in Israel and Turkey. In 2005, BGMC completed a European Tour in Berlin, Germany; Wroclaw, Poland; and Prague, Czech Republic. The tour was an historic intersection of the Chorus’s artistic and public service mission, drawing massive audiences and bitter anti-gay protests, which garnered international media attention (a common headline was “Music Triumphs Injustice”) and sparked important global conversations about LGBT rights.

Boston Gay Men’s Chorus creates musical experiences to inspire change, build community and celebrate difference. The BGMC is one of New England’s largest and most successful community-based choruses. Founded in 1982, the 175-voice ensemble is celebrated for its outstanding musicianship, creative programming, and groundbreaking community outreach. Under the dynamic leadership of Music Director Reuben M. Reynolds III, the BGMC sings a wide spectrum of classical and popular music and creates social change by providing a positive, affirming image of the gay and lesbian community. The Chorus is heard live by more than 10,000 people each season and thousands more through recording, television and internet broadcasts. In November, 2013, CBS-WBZ named The Boston Gay Men’s Chorus one of the top five choruses in the city of Boston.

BGMC: “Home For the Holidays” At Home