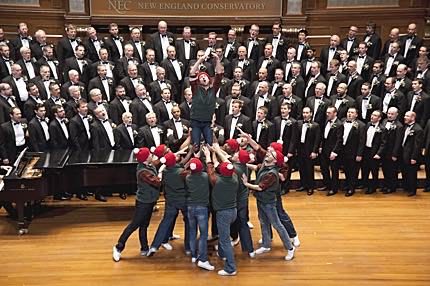 BOSTON, Mass―The Boston Gay Men’s Chorus is proud to present Noel, a holiday concert where traditional favorites like “Deck the Halls” and “The First Noel” will be combined with fun new classics like “Sparklejollytwinklejingley” from the Broadway musical Elf. The concert also features the debut of “A New Year’s Carol,” a stirring new work by Norwegian composer Ola Gjeilo co-commissioned by the Chorus. Performances take place at New England Conservatory’s Jordan Hall on Dec. 14, 19, 20, and 21. Tickets are available now.

“From advent calendars to Elf on the Shelf, many people celebrate the holidays by mixing old and newly-created traditions,” said Boston Gay Men’s Chorus Music Director Reuben M. Reynolds, III. “That’s what we’ll be doing onstage, performing holiday classics alongside new songs in a performance that captures the joyful and contemplative spirit of the season.

Noel features the world premiere performance of “A New Year’s Carol,” by composer Ola Gjeilo, who relocated from his native Norway to study composition at the Juilliard School of Music in 2001. The song is a hymn to the cycle of the seasons and the growth we experience as the wheel of the year keeps turning.

Other selections include “Ave Maria,” “Star of Wonder,” and a selection of five classic Christmas carols and holiday tunes re-imagined in the styles of unlikely composers, such as “What if Steven Sondheim had written ‘Santa Claus is Coming to Town’?” or “What if Jerry Herman had written ‘We Three Kings’?”

“From our elaborately staged opening with “Deck the Halls” to polka dancers, drag queens, and sequined elves, Noel is one of our most theatrical concerts yet,” said Craig Coogan, Executive Director of the Boston Gay Men’s Chorus. “We’ll perform the most cherished holiday favorites in Act 1. Then in Act II, we’re going to sprinkle tradition with some glitter.”

Boston Gay Men’s Chorus creates musical experiences to inspire change, build community and celebrate difference. The BGMC is one of New England’s largest and most successful community-based choruses. Founded in 1982, the 175-voice ensemble is celebrated for its outstanding musicianship, creative programming, and groundbreaking community outreach. Under the dynamic leadership of Music Director Reuben M. Reynolds III, the BGMC sings a wide spectrum of classical and popular music and creates social change by providing a positive, affirming image of the gay and lesbian community. The Chorus is heard live by more than 10,000 people each season and thousands more through recording, television and Internet broadcasts. In November 2013, CBS-WBZ named The Boston Gay Men’s Chorus one of the top five choruses in the city of Boston.

The Boston Gay Men’s Chorus is generously supported by Bank of America, JetBlue, and Reproductive Science Center. BGMC is a proud partner of the Massachusetts Cultural Council.