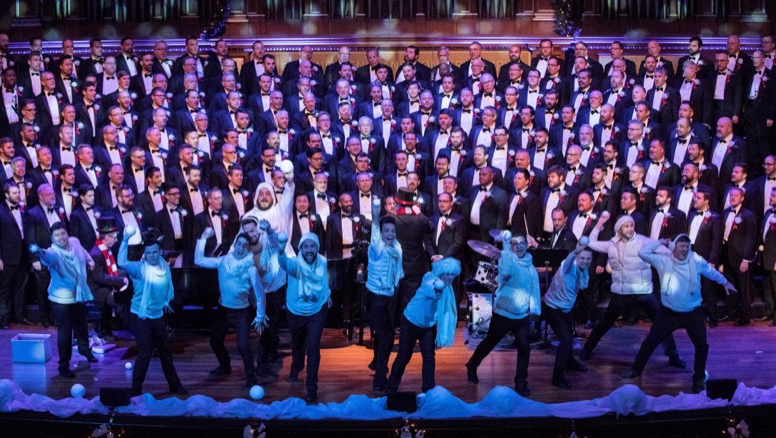 Oh, come all ye gayful! Boston Gay Men’s Chorus (BGMC) is about to unload their fabulous fairydust all over your holidays. The title of their seasonal show, “A Super Gay Christmas” isn’t ironic, it’s purely descriptive. Expect hotter moves than a tea dance in July, more glitter than a Pride Parade, and enough drama to stuff an entire season of Drag Race. Oh, and lots of rollicking holiday tunes and heartwarming carols, sung by the largest BGMC crew ever to take the stage with more than 200 singers!

As Music Director Reuben M. Reynolds, III said during the interview presented below, “This show is so affirmative, and it speaks to people who have no interest in religion, to people who are highly religious and those who are somewhere in the middle. There’s something for everyone.” More than anything, he added, “it’s about the fact that we must take time to stand with the people we love and to enjoy ourselves. In the midst of the current political climate, it’s important to do that.”

“A Super Gay Christmas” performances are Dec. 15, 20, 21, and 22 at New England Conservatory’s Jordan Hall. Learn more about how BGMC will bring the Merry and GAY to your holiday season in this interview with Reynolds.

Q: We didn’t know there’s actually a song called “Super Gay Christmas.” Where did you find this song?

A: I’d never heard of it either, until Paul Caldwell, the artistic director of the Seattle Men’s Chorus showed it to me. It was written and recorded by Kevin Yee, a Canadian comedian, who made a hilarious YouTube video of it it. Paul heard it and contacted Kevin to ask if his Chorus could do an arrangement of the song, which they did. So it’s not a song most people know. But it’s really fun and cute! Truth be told, we had to sanitize it a touch, I mean I just could not sing about leather slaves—

Q: —No, this is Boston and it’s a kid friendly show, after all.

Q: Oh, this sounds like a lot of fun, as always. Please tell us about some of the other ‘Merry and GAY’ touches in the show.

A: Well, we start off with a piece called “Funky That Hall,” which is a funky version of “Deck the Halls” and was inspired by RuPaul’s song, “Sissy That Walk.” So from the first notes, we’re into Gayland.

A: Good one! I can’t wait to see what our dancers come up with for that. There are more dancers, too—16 dancers on this concert. I don’t know where we’re going to put them.

Q: Sixteen dancers on stage at once?

A: Yes, I think. And we have more dance numbers—we have four, where normally, we have three. So they’re working like crazy.

Q: What other ‘holigay’ surprises do you have in store? It’s hard to resist these puns, by the way.

A: Well, speaking of puns, Jay Baer, a longtime BGMC member has always loved writing song parodies, and he’s taken “And I Am Telling You I’m Not Going,” from “Dreamgirls” and rewritten it about Mrs. Claus being pissed at Santa because he gets to go out and do all the deliveries and she has to take her frozen ass up to the North Pole and sit there and wait on him. So she sings this whole song about how she’s leaving the North Pole and he can keep his elves. It’s a big, dramatic ballad—as is the original—and soloist Nick Everage is singing it and he’s going to bring down the house.

Q: It’s about time Mrs. Claus got wise. Now, BGMC always mixes tradition into the Christmas camp. Where do those tunes fit into ‘A Super Gay Christmas’?

A: I’m so glad you asked, because this is a special year for us because we’re marking LeWana Clark’s 30th anniversary with the Chorus. She’s our American Sign Language (ASL) interpreter.

Q: Whoa. She’s been there almost from the beginning.

A: Exactly, and we wanted to do something to really honor her. So we’re doing a beautiful version of “Silent Night.” We’ll do two verses in German—the original language in which it was written—and two verses in English, then we do a verse in ASL. The entire Chorus has learned this song in American Sign Language and we’ll be doing it with LeWana. We do one verse signing with the Chorus “oohing” the melody in the background, then we do another verse that’s just the guys signing and it’s absolutely quiet in the theater. They’ll have on white gloves and the sounds you get of the whooshing as all the Chorus raises their arms and hands at the same time and the air moves.

Q: That sounds really cool, and lovely. What other chestnuts will you warm audiences with?

A: We’ll sing “The First Noel,” which leads into a new arrangement of “Here We Come A Wassailing” by our Principal Accompanist and Assistant Music Director, Chad Weirick. It’s a real showpiece. He’s added a brilliant piano part and all kinds of little cannons for the men: “Here we come, here we come.” So you’re adding voices and subtracting voices. And then he has a very slow middle section, and then it takes off again. And he’s just scampering up and down that keyboard.

Q: Okay, that sounds like fun. What other music will you do—or redo?

A: We have two pieces that I find very moving, “A Virgin Unspotted” and “Alleluia,” both of which were written by Boston composers. “A Virgin Unspotted” is by William Billings, who’s considered the first American choral composer. He’s actually buried in the Central Burying Ground in Boston Common.

“Alleluia,” was written by Randall Thompson—it was commissioned by Serge Koussevitzky, the director of the Boston Symphony Orchestra, for the opening of the Berkshire Music Festival in 1940. Koussevitzky thought he was going to get this huge, triumphal fanfare of a composition, and instead Thompson wrote “Alleluia,” and of course the title is the only word in the piece and it just repeats. It’s quiet and introspective because the U.S. was in the middle of World War II and Paris had just fallen, so Thompson didn’t feel like we should be celebrating. Instead, he wrote a quiet, introspective piece that he said was indicative of the good times to come. With the political strife that we’re experiencing right now, I thought that was a very wonderful thing to say: even when things look bad, you have to look forward to know that one day you will triumph.

Q: That sounds like a perfect fit for a holiday concert. It’s like another expression of “Peace on Earth, Good will toward men.”

Q: Beautiful! It sounds like there’s a lot of musical and thematic diversity, despite the very specific title of the show. Will the show also have some contemporary holiday pop, which you always do so well?

A: Of course. We’ll do “Jingle Bell Rock,” “Up On The Housetop,” and “Mistletoe and Holly,” an old Frank Sinatra song that talks about how wonderful it is to be at home for Christmas. We actually have several songs in the second half about being at home with family or loved ones on the holidays, like “All I Want for Christmas Is You,” and Katy Perry’s hit from last year, “Cozy Little Christmas With You.”

Q: And how do you wrap all of this up in a super gay holiday package, so to speak?

A: We end with another new piece from Chad, “Christmas Waltzes.” He brought me this piece one day and he said, “You know, I wrote this a long time ago but I really am proud of it.” It’s a mashup of waltzes about Christmas—city sidewalks, silver bells—that kind of stuff. He even gets a little “raindrops on roses” from “My Favorite Things” in there, and he talks about Santa bringing toys and all kinds of things. It leads to the actual song “Christmas Waltz:” “Merry Christmas, may your New Year dreams come true. And this song of mine in three-quarter time, wishes you and yours the same thing, too.” And that’s how we end the concert.

Q: Wait—you don’t really end a show called “A Super Gay Christmas” with a waltz? No offense, but that sounds a little anticlimactic, and just wrong.

A: Oh, don’t you worry. There’s going to be an encore with glam dancers. And this number just takes the cake, it really does. Who knew that the Village People put out a Christmas album?

Q: Did they really?

A: You’re going to see it and hear it. I mean, it’s just a scream when you’re sitting there singing “Santa, are you listening to me? I said, Santa, where’s my big screen TV?” It’s just hilarious. Everyone will leave the theater with their toes tapping and filled with the holiday spirit.

Q: Phew. I guess you’re not going to ruin Christmas after all.